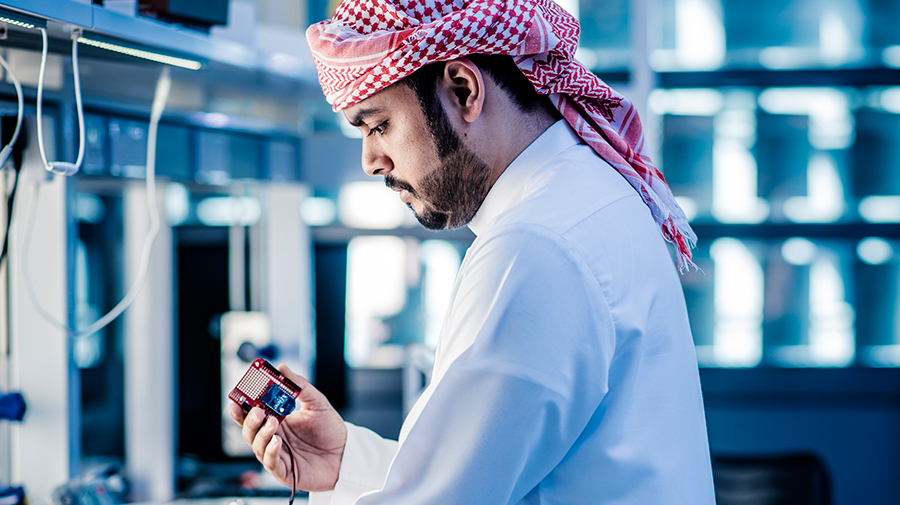 The UAE’s first group of locally trained space engineering students are ready to advance and enrich the country’s satellite, communications, defense, aerospace and educational sectors following their graduation from the Masdar Institute of Science and Technology, on 17 May 2017. Masdar Institute is a part of Khalifa University of Science and Technology.

Masdar Institute launched the region’s first Master’s concentration in space systems and technology in May 2015, in collaboration with Mubadala-owned satellite communications company Al Yah Satellite Communications Company (Yahsat) and Orbital ATK, a multinational aerospace manufacturing company. The concentration’s first group of graduates received their degrees this month, and most of them already have plans for how they will apply their specialized skills to the country’s space ambitions.

MSc in Engineering Systems and Management graduate Sumayya Al Mehairi was working for the Airbus Space and Defense Company when she first heard of the new space concentration offered at MI. The program’s central focus on the development of small satellites, called CubeSats, was what initially attracted her to enroll.

“When I first joined the space concentration, my goal was to gain the knowledge and experience to be able to plan and build small satellites and better understand satellite networks’ policies and regulations in the UAE,” she explained.

“Following my graduation, I am looking forward to getting back to my work at Airbus to implement what I have learned. I would also like to work with the Telecom Regulation Authority and UAE Space Agency to develop the country’s implemented satellites regulations, as that was the focus of my thesis research.”

The space concentration, which can supplement seven of Masdar Institute’s nine Master’s programs, was developed in response to the UAE’s goal of sending the Arab world’s first unmanned probe to Mars by 2021 and the country’s focus on developing its space, communications, defense and aviation sectors.

MSc in Engineering Systems and Management space concentration student Muhammad Al Awani was also drawn from his professional work to join MI’s pioneering space offering. As a lieutenant in the UAE Armed Forces, he recognized that the program offered the potential to build upon his Bachelor’s specialization in computer science to better serve his country in an exciting new field.

“As the UAE was embarking on a new era of space exploration, I felt Masdar Institute’s dual emphasis on innovation and sustainability would provide talented students with the critical ability to support the country’s space goals with sustainable and transformative technologies and systems,” the Fujairah native shared.

Following his graduation, he will return to the armed forces with new skills and insights that he is excited to apply.

“As an army officer, I am always looking forward to new challenges. I hope I can support the UAE’s space goals by contributing to the advancement of the UAE Armed Forces’ space development. Over time, it’s my goal to gain enough experience and expertise to be able to manage big satellite projects in the country,” Al Awani added.

Another space concentration graduate with an eye on the future is Mariam Mansouri. She was working with the Abu Dhabi Education Council (ADEC) as a school principal when news of the UAE’s first space concentration revived her childhood dream to be a space scientist.

“Ever since I was a child, I wanted to study space and learn how spacecraft move through it. Masdar Institute’s space concentration offered me a golden chance to realize those dreams,” she recalled.

During her MSc in Materials Science and Engineering studies, Mansouri learned about satellite systems and navigation, which she applied to MYSAT-1, a miniature satellite that is being developed at Masdar Institute.

With graduation over, she now aspires to bring together the UAE’s key players in its space initiatives with the country’s educational sector to develop a strong pipeline of talent from primary grades through to higher education.

“I am hoping to work with Masdar Institute, Yahsat, the UAE Space Agency and ADEC to prepare the UAE’s talented young people to be able to contribute to the country’s space goals and sectors,” Mansouri revealed.

The academic sector is also the desired destination of MSc in Engineering Systems and Management space concentration student Hanan Al-Messabi.

“When I decided to enroll, I had two main goals: to enrich and increase my knowledge of space and to compete against myself in an innovative sector. The past two years at MI have been challenging but today I am able to understand and work with other space experts,” she shared.

Al-Messabi considers herself a lifelong learner and says there’s no better teacher than space to help mankind unlock the mysteries of our universe.

“Space, which is infinite and timeless, is the best teacher that we humans still have so much to learn from. For the next stage, I am planning to develop my software skills to support increased understanding and discovery of new objects in space. To do this to the best of my ability, I plan to continue to learn and study more,” she said.

Fellow MSc in Engineering Systems and Management space concentration graduate Bushra Al Naqbi hopes to be among the 150 engineers required to achieve the Emirates Mars Mission.

“One of my plans is to be a space engineer in the UAE’s Space Agency, to help it become as successful as NASA,” she revealed.

Working for her home country’s space agency gives her the opportunity to continue to add to her knowledge and understanding.

“My curiosity was the main reason I joined the space concentration, as it’s my nature to seek out and learn new things. MI enriched me in this regard through workshops, events and training. It also helped me improve my communication and management skills by working with leading space entities such as YahSat, Orbital ATK and the UAE Space Agency,” Al Naqbi shared.

MSc in Microsystems Engineering and space concentration graduate Azza Al Bakr hopes after graduation to get a chance to further explore space through work in academia or industry. Earlier this year she had a taste of the zero-gravity experience of space on a parabolic flight that was part of her prize in the UAE Space Agency-Japan Aerospace Exploration Agency Ideathon Competition.

“Being part of the first graduating class from MI’s space concentration, and among those who have contributed to the UAE’s CubeSat with remote sensing and technology demonstration payload, has been a great experience. Working collaboratively with industry taught me how to work with and learn from others and how to articulate and action my ideas to succeed,” Al Bakr said.

She is now looking forward to applying that knowledge and is eager to be part of future developments in the UAE’s space technologies and satellite development.

With the UAE’s commitment to reaching Mars in 2021 and developing its space-related sectors these graduates are sure to be among the pioneering scientists and engineers whose achievements will inspire the next generation of Emirati youth to reach for the stars.