Masdar Institute of Science and Technology is leading research to advance and transform the critical technologies that provide the UAE with a significant portion of its freshwater to enhance water security, reduce the strain on the country’s limited natural freshwater, save money and preserve the environment.

Since 2005, economic development and urban growth in the UAE has resulted in a doubling of the population. Supplying this demand has been an ongoing challenge. The UAE’s arid climate, dry soils, scant rivers and dams and very limited precipitation mean that groundwater is the only natural freshwater source in the country, and that is in very limited supply. The UAE has relied upon foreign fossil fuel-powered desalination technologies to meet with the shortfall in natural freshwater supply for many decades, but in recent years has focused on developing its own technologies to provide desalinated water in a more environmentally-friendly way.

Masdar Institute has been a key contributor to a Masdar project that recently saw the inauguration of the UAE’s first renewable-energy powered desalination facility. The Ghantoot plant, which was inaugurated on November 23, hosts a Renewable Energy Powered Desalination Program to explore the feasibility of harvesting energy from the sun to provide Abu Dhabi’s potable water needs. Groundwater provides just over 50% of the UAE’s water supplies and desalination provides 37%, most of which is used for industrial and domestic consumption. The remaining 12% is reclaimed water, which is used for landscaping irrigation.

Under the Renewable Energy Powered Desalination Program, four pilot projects were commissioned by the Masdar company, which aims to have full-scale renewable energy powered desalination operational in Abu Dhabi by 2020. Each of these four projects have a small-scale test facility at the Ghantoot plant as part of the initial testing phase, which is currently being completed and will run until 2016.

Desalination is also one of the critical topics being discussed at the International Water Summit (IWS), taking place during Abu Dhabi Sustainability Week 2016 at Abu Dhabi National Exhibition Center (ADNEC), on 15-23 January 2016.

Throughout the year, Masdar Institute researchers will be delivering advancements to existing desalination technology and introducing novel approaches for more sustainable and affordable new technologies in order to meet these goals. Their research aims to help the UAE overcome its water scarcity and security challenges, which was one of the seven priority sectors identified in the UAE’s National Innovation Strategy announced in late 2014.

Most of the UAE’s desalination plants are cogeneration plants, which utilize two techniques – multi-stage flash (MSF) and multiple-effect distillation (MED) – to turn seawater into freshwater. These cogeneration plants first produce electricity, and then the steam by-product is used to remove salt and other unwanted minerals and impurities from seawater, to produce freshwater.

However, these plants are energy intensive and emit large quantities of greenhouse gases – approximately one third of Abu Dhabi’s carbon footprint results from the production of water and electricity. In fact, the UAE’s reliance on such energy-intensive technologies is estimated to cost AED11 billion annually. Increasing water consumption and the impacts of global climate change have only intensified the UAE’s need for affordable and low-carbon desalination technologies to address these problems.

That is why Masdar Institute has focused so much of its attention on meeting the challenges of desalination through its Institute Center for Water and Environment (iWater). Through R&D activities at the center, faculty and students are working on identifying and developing sustainable, diverse and cost-effective desalination solutions directly aligned with the set of technologies being currently piloted.

The first of the research projects utilizing the Ghantoot desalination plant is a collaboration between Masdar, Masdar Institute and European companies Laborelec and Suez Environment, to research the feasibility of a reverse osmosis (RO) desalination plant, using innovative desalination and powered by solar technologies.

Traditionally, RO was not considered suitable for the Gulf, due to the high levels of dissolved solids and high temperature of Gulf seawater. However, research conducted by the faculty and students at Masdar Institute is now effectively confirming the feasibility of desalinating the Gulf’s seawater using a number of techniques, including RO, powered by solar energy technologies.

Dr. Hassan Arafat, Associate Professor of Chemical and Environmental Engineering and Principal Investigator of this study explains: “Through its R&D activities, Masdar Institute has the potential to advance commercial scale RO desalination plants powered by renewable energy, playing a leading contribution to innovation in this area. Our research has identified a number of benefits including a reduction in carbon footprint from the use of pumps powered by renewable energy and a reduction in the associated operational costs of the plant.”

Diversification of desalination technology through pilot projects intends to support Abu Dhabi’s strategic goals related to the adoption of innovative clean solutions for water production. The projects will also assist the emirate in achieving its renewable energy use targets. Abu Dhabi has set a goal of reaching 7% energy production capacity from renewable energy by 2020.

Masdar Institute is also investigating the potential for supporting the desalination industry in the UAE through the integration of capacitive deionization (CDI) with RO as a method of desalination. This collaboration is being conducted with Veolia, a leading French environmental solutions provider, and will assess the potential for the use of CDI as a desalination polishing step to remove residual ions that must be a low concentration in drinking water. This technology could improve the economics of clean water production in the UAE.

Dr. Linda Zou, Professor of Water and Environmental Engineering at Masdar Institute and Principal Investigator on the project, states: “The aim of the research in this investigation is to successfully integrate CDI into RO plants to replace second stage reverse osmosis. These desalination plants can operate using solar energy to become self-sufficient in terms of energy use, reducing the reliance on cogeneration plants, operational costs and the carbon footprint of the emirate. CDI desalination techniques need less maintenance than conventional desalination methods and are more robust due to their carbon-based electrode materials.”

Currently, the average UAE resident uses 550 liters of water per day. According to the Abu Dhabi Water and Electricity Company (ADWEC), the forecasted peak for water demand in 2030 could reach just over 1,362 million gallons of water per day.

To help prepare Abu Dhabi for the desalination needs of future generations, Masdar Institute’s research additionally focuses on forward osmosis (FO) and its potential for deployment across the UAE. Partnering with US-based water testing and technology company Trevi Systems, Masdar Institute is providing research supportive of an FO desalination pilot plant as part of the Ghantoot desalination facility. Laboratory phase testing of the plant is underway, including analysis of how the plant operates under different conditions.

Dr. Shadi Wajih Hasan, Assistant Professor of Water and Environmental Engineering, Masdar Institute and Principal Investigator of the project, explained: “There is significant potential for FO technology in the UAE. As part of this research, we also hope to contribute to innovation in this area by developing a new FO membrane that can better withstand the harsher characteristics of Gulf seawater while maximizing water production.”

This research has also identified an innovative way to manage brine, which is highly concentrated saltwater byproduct of the desalination process, by neutralizing it so it does not harm marine plants and animals when discharged back into the Arabian Gulf.

In order to further develop RO renewable energy technologies, the final study of the Renewable Energy Desalination Program is testing the feasibility of desalination by RO, in addition to concentrating the brine byproduct using membrane distillation.

The study was proposed by Spanish innovative technology solutions provider Abengoa, with Dr. Arafat overseeing the research in his role as Principal Investigator. The objective of the collaborative research project is to improve the state-of-the-art in desalination waste management by identifying ways to clean and maintain membranes used for brine management.

“Through this program, we hope to not only diversify desalination technologies and make them more affordable, but we also want to showcase Masdar Institute’s leading R&D role in this sector. We believe that, through our research, Abu Dhabi, the UAE and other GCC countries can benefit from our innovations and reduce the dependence on fossil fuels,” said Dr. Arafat.

Through the Renewable Energy Powered Desalination Program and its other desalination R&D efforts, Masdar Institute is focused on supporting the development of novel water production and purification technologies, reducing the costs associated with clean water production in Abu Dhabi and providing innovative solutions to advance the UAE’s strategic goals regarding water security. The institute is also dedicated to developing the human capital needed to maintain and advance the country’s water industries through its research-based graduate education, so that the future water needs of the emirate can be met with local and long-term sustainable solutions.

Research and collaboration of this kind will help the UAE minimize the adverse impacts of seawater desalination on the region’s marine and terrestrial ecosystems while developing the foundations to meet growing water demands. This will lead to a better future for the UAE’s people through enhanced water security, but also for the world at large through reduced carbon emissions and innovative new offerings to tackle water scarcity. 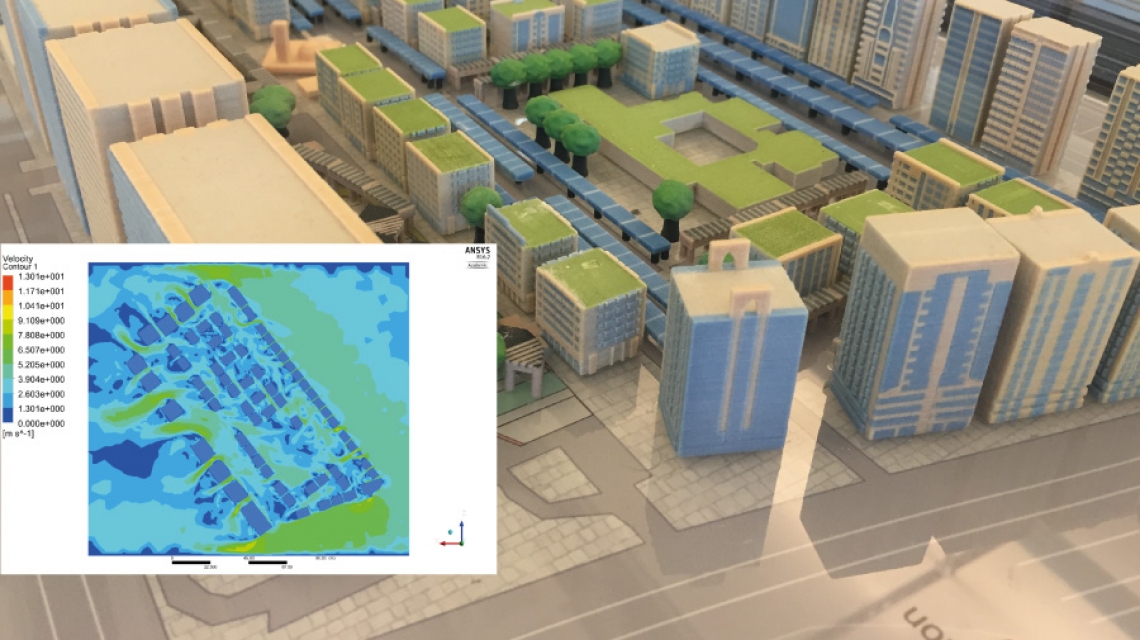