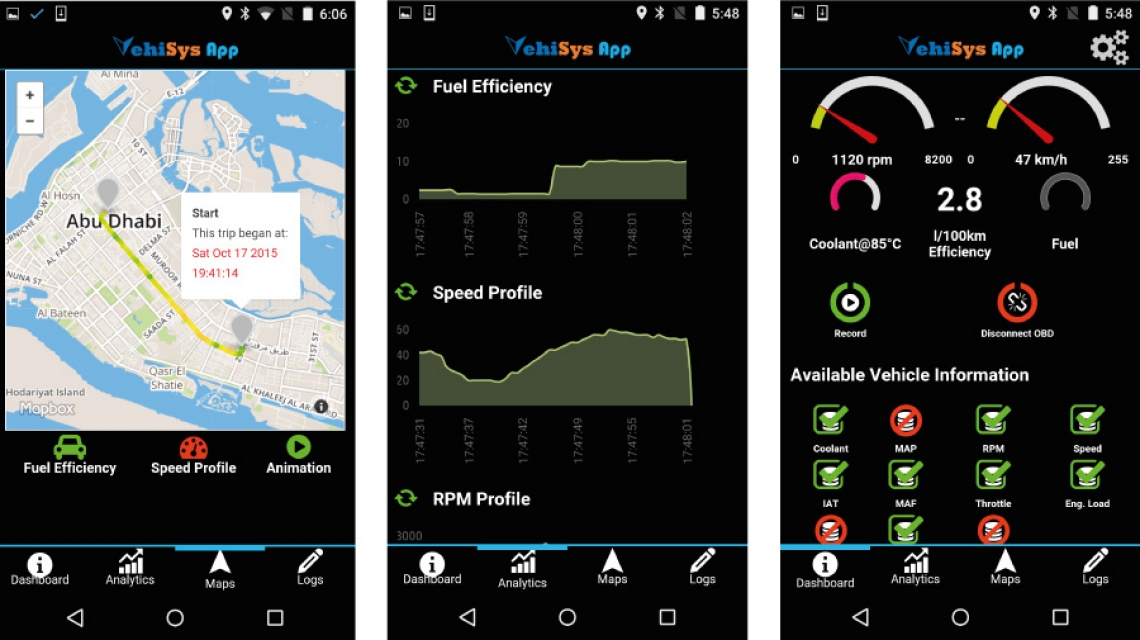 A new participatory sensing mobile application called VehiSys that provides information on a car’s “distance-to-empty” and general fuel efficiency has been developed by a team of researchers at Masdar Institute. The mobile app, which is now available from the Google Play store, is an outcome of Masdar Institute’s strategic objective to leverage information science for energy applications in both buildings and transportation.

Currently, the vehicle app is designed to collect and store data on an individual user’s phone, to help the user understand his/her fuel consumption. However, Dr. Chau hopes that the app will be adopted by corporate users to help manage fleets of vehicles, leveraging the participatory sensing aspect of VehiSys.

The participatory aspect of VehiSys makes it unique from other mobile applications that use data from a car’s computer to inform the driver about fuel consumption or other factors. While other apps typically inform drivers about their trips – including miles driven, miles per gallon and likely fuel costs – they consider data taken only from that one car’s computer.

“The VehiSys application will be able to read data from the car using a Bluetooth device that the driver will plug into the car’s computer. The device will send the information about the car, such as speed, RPM, fuel level, engine coolant temperature and air pressure, to a central server, while the phone will send information about the driver’s location. By combining the readings from the car and phone, the data will help determine the amount of fuel consumed on particular routes and determine which driving conditions and routes result in the best fuel economy for any given car,” Dsouza explained.

The drivers in a vehicle fleet that have the VehiSys application installed and bluetooth device enabled would be contributing their car’s data to the core of data being gathered and analyzed, which will ultimately be used to inform drivers on smarter, strategic, tactical and operational choices that will improve their car’s fuel economy.

“Fuel consumption is affected by different variables, such as driving behavior, vehicle models, average speed and traffic conditions. We want to determine which of these variables at certain times and locations lead to maximized fuel economy of vehicles,” Dr. Chau said. “This information would be extremely valuable to organizations that manage vehicle fleets,” he added.

VehiSys might advise drivers to slow or increase speed during certain portions of their journey, in order to maximize the car’s on-road fuel efficiency. It will know this from data collected from other cars that have driven in the same place, including factors that both positively and negatively affected various cars’ fuel efficiency while they drove on that route.

“Drivers don’t necessarily realize that slight changes in their driving behavior can make a big impact on their fuel economy. We’re hoping that through this application, we will provide drivers with a smarter method for estimating their fuel consumption, regardless of the type of car they drive,” Dsouza added.

Now available for public use from Google Play, VehiSys will begin providing information to drivers that choose to use the app about  about their driving behaviour and vehicle performance.

“We will be able to support more analysis with the data gathered. Right now though, our focus is on estimating distance-to-empty, or the amount of fuel a driver has before he has to fill up again,” Dsouza said. He also added that the app’s information can be applied to both gasoline and electric vehicles.

Finding innovative solutions that will benefit the UAE and wider world is a core tenet of Masdar Institute’s mandate to provide real world solutions to issues of sustainability. Through their participatory sensing vehicle app, Dr. Chau hopes to ultimately empower UAE drivers to make smarter driving choices that will potentially lead to less fuel consumption and less carbon dioxide in the atmosphere.