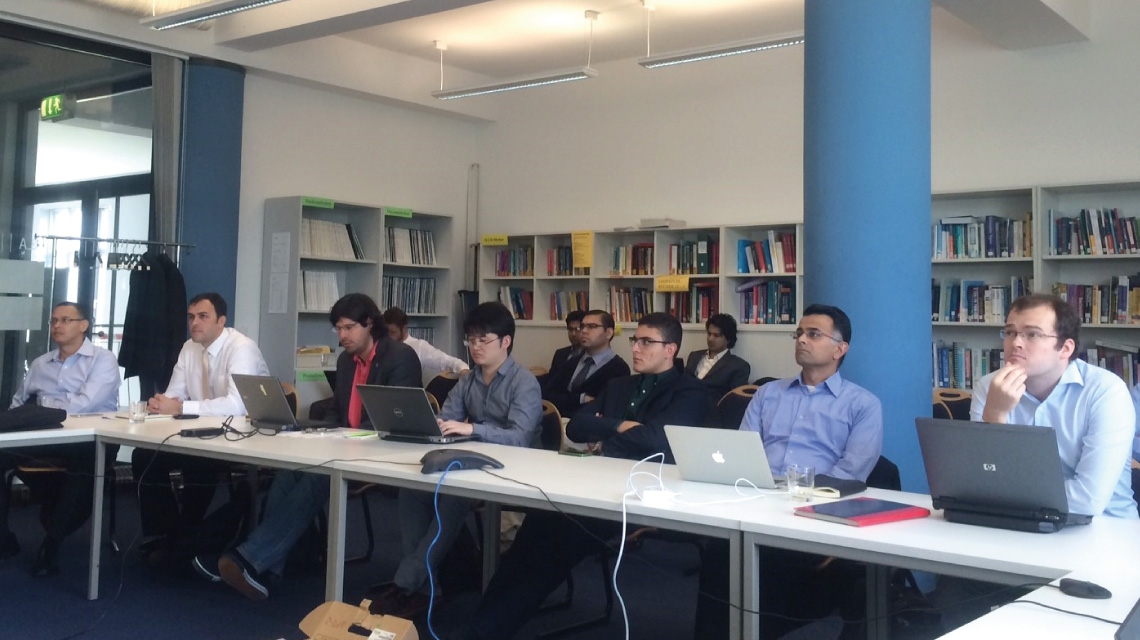 Abu Dhabi-UAE: 24 August, 2014 – Masdar Institute of Science and Technology, an independent, research-driven graduate-level university focused on advanced energy and sustainable technologies, and Technische Universität Dresden (TU Dresden) in Saxony, Germany, today announced that researchers from both institutions have presented more than 20 technical papers on the development of three-dimensional (3D) stacks of integrated chips at a workshop in Dresden.

The two-day workshop that witnessed the participation of delegations from both institutions was held on June 23 and 24 at the Technical University of Dresden. The delegation from the Masdar Institute included eight faculty, two research engineers and three students. The workshop assessed progress on research that is part of the joint TwinLab 3D Stacked Chip (3DSC) Center, backed by Abu Dhabi’s Mubadala Technology and Industry, and the Government of Saxony, Germany.

Two of the presentations were given by recent Masdar Institute graduates whose thesis work was funded by the Center. The workshop was the fifth in a series of biannual meetings started in May 2012, alternating between Dresden and Abu Dhabi which work to bring Masdar Institute and TU Dresden researchers together to discuss joint work and progress on 3DSC Center projects.

In her welcome note, Shaima Salem Al Habsi, Energy and Climate Change Attaché, UAE Embassy in Berlin, highlighted the importance of such collaborative work between academic institutions in the UAE and Germany and the contributions it makes to the strengthening of cultural and scientific ties between the two countries.

Al Habsi said: “This exchange of students and faculty marks a key stage in the cooperation between the German and the Emirati research and academic communities. The cooperation between Masdar Institute and the Technical University Dresden/ TUD through student and faculty exchange is a distinctive feature that will help build a qualified research community that will be a model for future collaborations.”

Now in its second year of operation, the TwinLab 3DSC Center has been addressing a topic of significant technological importance, namely how to improve performance and reduce power in 3D stacked chips. Such chips are slated to be on the innovation forefront of the semiconductor industry over the next decade. Compared to the conventional 2D chips that need to be shrunk in size to pack as much as possible into a single layer, in 3D chip stacking the chips are thinned and stacked on top of each other to produce high-speed and multifunctional systems. A properly designed 3D stacked system consumes 70 per cent less power than a conventional chip while increasing the communication bandwidth among the chips.

Dr. Fred Moavenzadeh, President, Masdar Institute, said: “The TwinLab project marks an important collaboration between the UAE and the Saxony Government in Germany that has progressed well on both sides. The biannual meeting of researchers from Masdar Institute and TU Dresden ensures each side is informed of the progress, while charting a future course of action. With the support of the UAE leadership, the collaboration continues to pave the way for inventions in computing technologies of the future. We hope the project will result in true breakthrough innovations, bringing benefits to all stakeholders in the advancing semiconductor industry.”

At the meeting, Masdar Institute researchers, led by Dr. Ibrahim (Abe) Elfadel, Professor and Head of the Institute Center for Microsystems (iMicro), presented their work on various areas of 3D integration, including integration of photonic components, solar cells, and super-capacitors, as well as temperature sensing and management, yield improvement, and the use of carbon nanotube as a the 3D connecting material.

Led by Dr. Gerhard Fettweis, Professor and Head of the Vodafone Chair Mobile Communications Systems at TU Dresden and co-founder of TwinLab 3DSC, the TUD researchers presented their recent advances on photonic integration at the process, device, and design levels, as well as their work on process engineering, and circuit modeling and design of systems including copper-based vertical connection.

Dr. Fettweis said: “As one of the first jointly established research projects of its kind, the TwinLab has had a very successful first phase. Researchers from both sides are working in partnership to establish a role model for other TwinLab projects. As a first result, the two research institutions have developed models, simulation techniques, and first prototypes, which build the basis for further development and optimization of highly efficient 3D chip-stack intra-connects.”

Dr. Elfadel said: “We are pleased that the research work conducted at Masdar Institute under the framework of TwinLab 3DSC has already graduated three students with one of them getting a best thesis award in Masdar Institute’s Computing and Information Science Program and the two others getting honorable mentions from the Microsystems Program. We are grateful for the support that our work has received from Mubadala Technology and Industry and are very much looking forward to pursuing this line of research in collaboration with our German colleagues.”