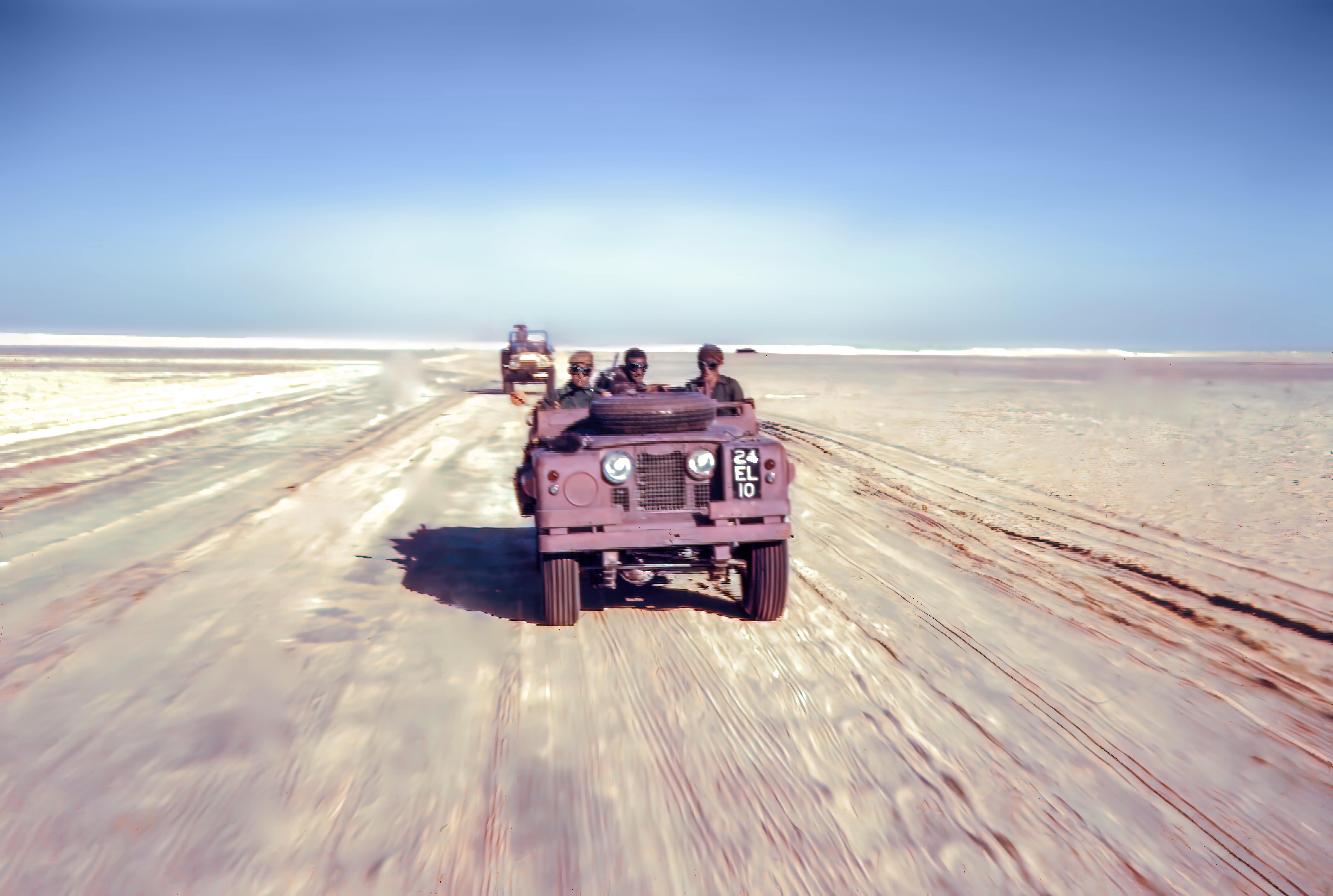 As the British prepared to leave the Arabian Gulf prior to the formation of the United Arab Emirates, intelligence of dissidence and insurgents in the Omani enclave to the north of the country prompted a small, covert military operation into protecting British interests in the region.

Operation Intradon was a British-led counter-insurgency operation in the Omani enclave of Musandam which ran from December 1970 to March 1971. A short skirmish and a long hearts-and-mind campaign, the operation sought to ensure Oman’s control over the region and handle a suspected strong dissident presence as Britain began to withdraw from the region.

Dr. Athol Yates, Assistant Professor, Department of Humanities and Social Sciences, has investigated this little-known operation to secure British interests in the Gulf for an article in Small Wars and Insurgencies. With Dr. Geraint Hughes, King’s College London, Dr. Yates presents an overview of the operation and offers insight to what the operation says about the way British military operations were crafted in the Gulf.

Since the early 1800s, Britain exercised considerable influence over the Arab Gulf States, including the now United Arab Emirates, Bahrain, Qatar and Oman. In 1968, the British government announced it would withdraw all British troops from the region, leading to the formation of the UAE in 1971, an independent nation neighboring British-supported but independent Oman.

“Given the scale of this operation, it is surprising that little has been published on it,” Dr. Yates noted that the operation was driven by the political aim of forcing the Sultan of Oman to take administrative control of the ungoverned Musandam enclave. “This would then provide protection to the Strait of Hormuz oil route and remove a threat to the process of federating British protected states into what became the United Arab Emirates.”

The Strait of Hormuz is a narrow sea line between Iran and Arabia, through which a third of the world’s oil supplies are shipped each day. The Musandam is a mountainous peninsula overlooking the Strait and an enclave of Oman, separated from Oman by the northern UAE. Omani sovereignty over this peninsula and British involvement in the articulation and retention of this control is a recurring theme, culminating in Operation Intradon in 1970. At this time, the majority of Musandam’s inhabitants were from the Shihuh tribe, with the political centre in Khasab.

“The Sultan appointed a wali, or governor, to oversee the Musandam, though his influence didn’t extend much further than Khasab due to very limited resources and power to enforce the Sultan’s wishes,” Dr. Yates explained. “The security environment along the west coast of Musandam was further complicated by an ongoing dispute between Shihuh groups and the ruler of Ras Al Khaimah. Given the numbers of Shihuh in both Musandam and Ras Al Khaimah, the ruler feared a Shihuh ‘invasion’ and rebellion, both of which could destabilize the other Emirates. As noted by British officials, unless the Sultan started exercising control to defuse the political issues, ‘this area will remain a constant source of trouble and embarrassment for us here.’”

Feeding into tensions in Musandam was the desire by some Shihuh sheikhs to gain independence or autonomy from the Sultan of Oman. In 1966, an intelligence report noted that one Shihuh sheikh tried to enlist the help of the rulers of Dubai and Abu Dhabi to persuade the British to regard his territory as independent. The British, however, hoped that if the Omani Sultan established control over Musandam, separatist efforts by the Shihuh would end.

In 1971, the British government would fully withdraw from the then Trucial States, and the United Arab Emirates formed. Maintaining influence in the region remained important to the United Kingdom, for oil supply, trade and investment reasons. The Musandam peninsula had morphed from a point of strategic interest to a vital component of Gulf security for the transit of oil tankers.

“The British were particularly concerned to avoid a repeat of the withdrawal from Aden in 1967 and its aftermath,” Dr. Yates said. “The Aden withdrawal occurred under fire, and soon after Britain withdrew, the British-supported sheikhs were overthrown, with South Yemen becoming a Marxist-Leninist state. A similar outcome in the Trucial States would threaten British political and economic interests in the region – notably, the continued flow of oil through the Strait of Hormuz.”

Operation Intradon targeted an estimated 10 to 30 ‘hardcore’ anti-British and leftist insurgents, who were reportedly subverting the local tribes, namely the Shihuh. The operation started on 17 December 1970 and ended on 29 December 1970, although its tail continued until 31 March 1971, as the British recognized that while it would be desirable for the Omani ruler to rapidly establish administrative control, he would need support to do so. At this time, the Sultan of Oman had no police, military or civil service representatives in Musandam, just the wali, meaning it was effectively self-governed by the Shihuh and some smaller in number tribes.

“The threat posed by dissidence could only be permanently addressed if the Sultan was able to establish a lasting presence in the region and effectively administer Musandam,” Dr. Yates said. “Musandam is an enclave with no land border with Oman itself.”

Any dissidence to any of the political decisions would pose an increasingly serious threat to security as far as the British were concerned. There had been news of threats posed to British interests by dissidents in Musandam, leading to British prime minister Edward Heath approving Operation Intradon.. It involved the deployment of a Special Air Service (SAS) squadron by both boat and parachute, and help from the Special Boat Service (SBS).

The plan for Intradon noted that ‘very little is known about their numbers, equipment, whereabouts and aims’ of the insurgents. In comparison to the 10 to 30 insurgents suspected in Musandam, Intradon involved hundreds of men drawn from all three British armed services and the Trucial Oman Scouts (TOS), a British-led but locally raised light infantry force based in the Trucial States that included several hundred Emiratis.

On 17 December, the operation was supposed to start with the covert insertion of SAS troops from the sea, but this was postponed by a day because of poor weather. Additionally, a cartographic error meant that the TOS squadron meant to secure one village actually landed in another two miles south. Despite this, over the course of a three-day search, the TOS captured ammunition, uniforms and documents that appeared to have been left by the suspected insurgents, with the Royal Navy intercepting dhows with arms and ammunition, although these discoveries were not deemed to be connected to any insurgent activity. At the end of this phase, the SAS and other British forces were withdrawn from Musandam, with no suspects captured and no combat casualties.

Intradon’s other objective was to establish the Sultan’s control over Musandam, with the chosen political representative flown in via helicopter on 17 December. The helicopter returned to Muscat with the local sheikh who was loyalty to the Sultan was suspect.

Between 18 and 29 December, the TOS patrolled on foot, visiting the majority of the villages in Musandam. No insurgent opposition was encountered.

“In addressing Intradon’s outcomes, it can be argued that Britain’s tactical goals and political aims were achieved,” Dr. Yates said. “Tactically, Intradon succeeded in disrupting the activities of the dissidents in the area, and politically, the operation resulted in the Sultan having an administrative and security presence in Musandam, which gave him the foundation from which to end separatism in the region. It also denied any hostile forces a base from which to launch subversive activities into the Trucial States, preventing them from potentially undermining the process of federation or harrying British troops during withdrawal. The operation also contributed to the key British political interest in the Gulf: ensuring the safe passage of oil through the Strait of Hormuz.”

In the article in Small Wars and Insurgencies, Dr. Yates offers some opinion into how events like Operation Intradon highlight Britain’s approach to military operations in the Arabian Gulf, particularly when its occupation was ending.

“The assessment of Britain’s success in this operation rests on some questionable assumptions, the most obvious being that there was a serious insurgency threat in the first place,” Dr. Yates said. “The evidence indicates that this threat was a phantom: no insurgents were observed and no firefights occurred. Even had the intelligence on the dissident threat been accurate, post-operation history makes it questionable that such groups actually threatened the process of federation of the Emirates. How Operation Intradon came about shines a light into how British military operations were crafted in Britain’s informal empire in the Gulf.”

Department of Humanities and Social Sciences