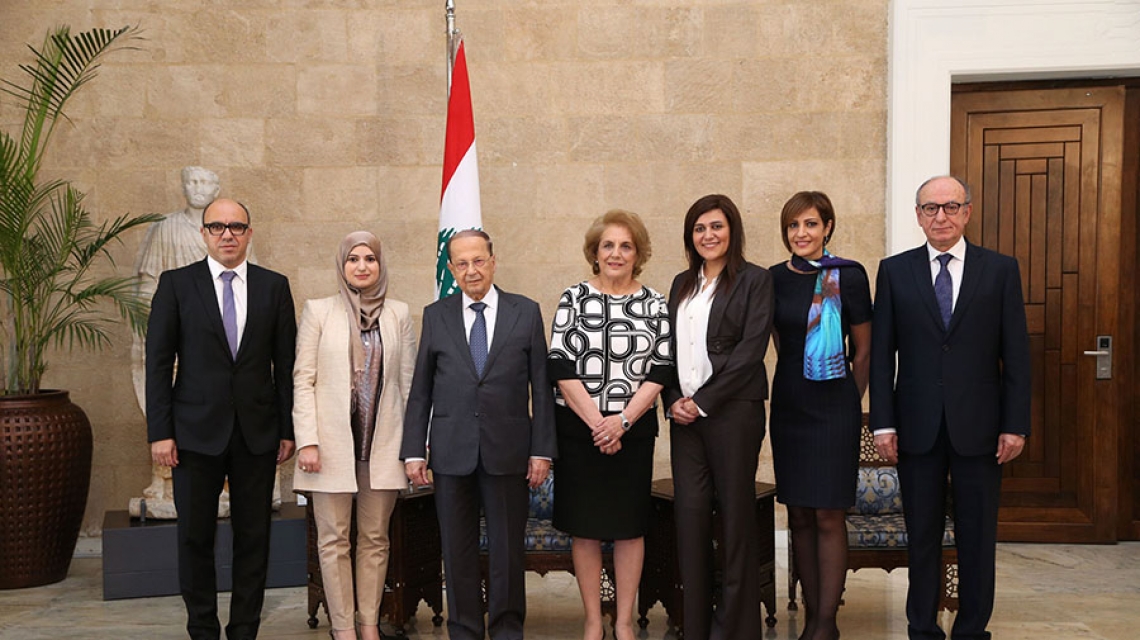 His Excellency Michel Aoun, President of Lebanon, and His Excellency Saad Hariri, Prime Minister of Lebanon, have honored Masdar Institute PhD student Nazek El-Atab, winner of the 2017 L’Oréal-UNESCO For Women in Science (FWIS) Rising Talent Award for the African and Arab region.

At a ceremony organized by L’Oreal Levant at the Presidential Palace in Baabda, overlooking the Lebanese capital Beirut, El-Atab was honored along with two other Lebanese winners of the L’Oréal-UNESCO For Women in Science (FWIS) awards – Prof. Nivine Khashab and Dr. Tamara Elzein. Others present on the occasion included Philippe Patsalides, Director, L’Oreal Levant, and Dr. Mouin Hamze, Secretary-General at National Council for Scientific Research, Lebanon. Previous winners of the same award from Lebanon and other L’Oreal Levant officials were also present.

Separately, El-Atab met with His Excellency Saad Hariri, Prime Minister of Lebanon, at the prime minister’s headquarters in the Grand Serail, Beirut. His Excellency Hariri expressed his pride and continuous support for the ‘women in science’ cause.

El-Atab said: “It was an extreme honor to meet the Lebanese President, and the occasion was especially special for me because it was organized to honor us – the Lebanese women in science.”

“His Excellency Aoun enquired about our research projects and said that he was very proud of our achievements. He hoped that I remain a role model and encourage other women to contribute to society through science and technology. He also expressed his continuous support and willingness to provide us with funds, if needed, to continue working on our research and registering more achievements beneficial to the global community.”

A PhD student at Masdar Institute, part of the newly established Khalifa University of Science and Technology, El-Atab recently received her award at the International Rising Talent Gala, during the 19th edition of the L’Oréal-UNESCO For Women in Science awards, held in Paris. She was awarded for her research in miniaturizing electronics without losing memory. El-Atab is also one of the four recipients of the 2015 L’Oreal-UNESCO FWIS Middle East Fellowships award.

Professor Niveen Khashab was chosen as one of the five laureates and was honored at the 2017 Edition of the L’Oréal-UNESCO For Women in Science Awards gala event in Paris. She was recognized for designing novel nanoparticles that could improve early detection of disease. Dr. Tamara Elzein, was honored for her work in trapping radioactivity in the Material Sciences area.