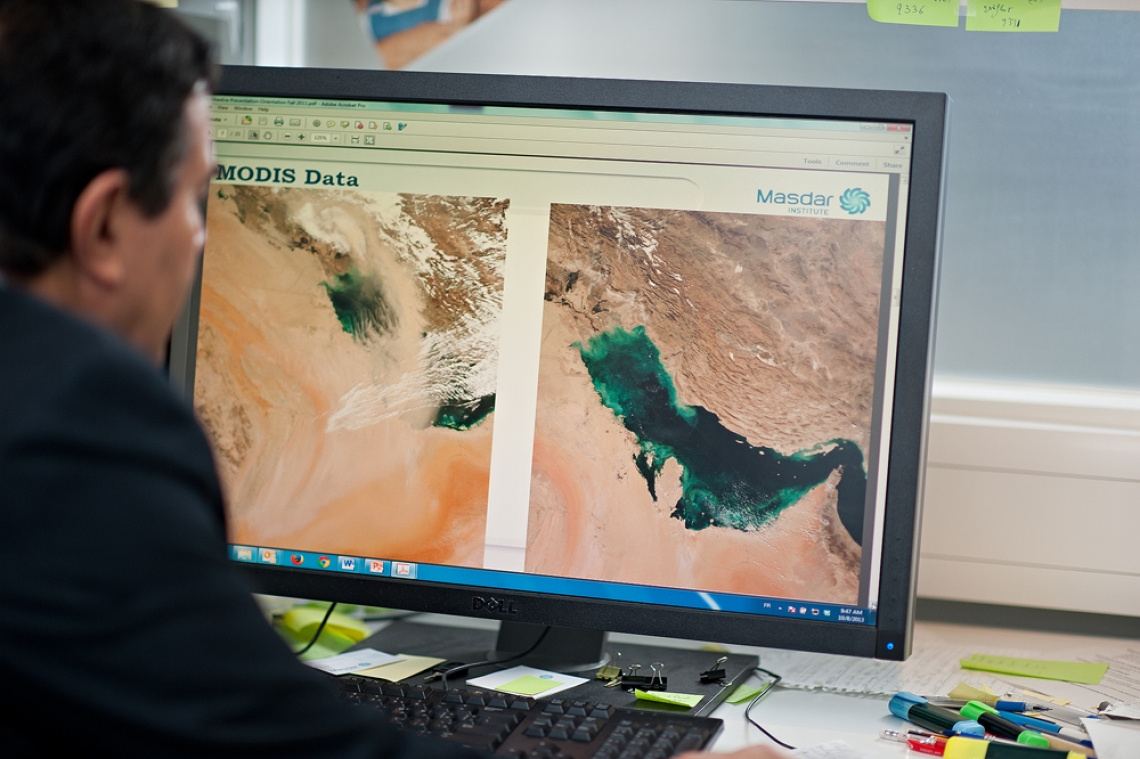 The UAE is no stranger to dust storms. While dense dust in the air can seem to be just a mere nuisance, the UAE’s dust storms can pose real health hazards. Reducing visibility for road and air traffic and producing spikes in asthma cases are just a few examples of dust’s potential to wreak havoc across the country.

This has prompted post-doctoral researchers Dr. Shaik Ghouse Basha and Dr. Phani Kumar Devulapalli, from Masdar Institute’s Water and Environmental Science Program, along with Dr. Taha B.M.J. Ouarda, Professor of Water and Environmental Engineering and Head of the Institute Center for Water and Environment (iWater), to undertake the region’s first comprehensive dust climatology study. The researcher aim to find critical answers to the UAE’s dust storms, including where they come from and how they affect the atmosphere.

Speaking about the importance of the study and its impact on the UAE, Masdar Institute’s Interim Provost Dr. Behjat AlYousuf said, “In-depth research of the country’s dust is critically important to the development of advanced climate models, which will help the country detect and mitigate the effects of dust storms on health, transportation, renewable energy and agriculture.”

The UAE is located in the Northern Hemisphere and sits on the global ‘dust belt,’ which wraps around North Africa, the Middle East, Central and South Asia, and China, and accounts for nearly 80% of the world’s dust. Yet, in a region so strongly affected by high levels of dust most of the year, dust is often not included in local climate modelling parameters. The dust climatology study is looking to change this by providing dust modelling data for more advanced climate models, which in turn can better predict dust storms and their impact on climate, health, energy and agriculture.

Their research so far tracks the origins of the UAE’s dust to two deserts – the Sahara and Rub’ al Khali, the world’s largest sand desert encompassing most of the southern third of the Arabian Peninsula.

“We used a combination of data collected from ground-based weather stations over the past 33 years and climate model datasets to determine various dynamics associated with dust storms and the storms’ effect on surface parameters, like precipitation, temperature, aerosol and optical properties. From surface observations, we learned when these dust storm hit and, using modeling data sets, we were able to pinpoint where the dust came from,” said Dr. Basha.

They found that on average, dust storms reduce the UAE’s atmospheric temperatures by 4.5 degrees Celsius. The dust storms begin in December, occur with the most frequency between February and March, and start decreasing until August. The average dust storm lasts 21 hours and occurs more frequently over Abu Dhabi.

During a dust storm, there are huge increases in aerosols – tiny particles of soot and organic matter emitted by power plants, factories and volcanoes, as well as mineral dust wafted off from the Sahara and other large deserts. Dr. Basha and Dr. Devulapalli are working to determine which type of aerosols are present during the storms and their chemical compositions.

Dr. Devulapalli said, “These aerosols can affect climate in many ways. For example, the aerosols affect the sun radiation reaching the Earth’s surface, temperature and cloud formation. They also affect the earth’s atmospheric layers differently. One notable effect of dust storms is the heating of the atmosphere. And in some layers, the aerosols during dust storms cause more heating, whereas in other layers relatively less heating is observed. We are interested in finding out why we see the diverse dust effects across different atmospheric layers.”

The researchers believe their analysis and explorations will contribute to better climate models of the region that more accurately predict when dust storms will occur and how they will affect the atmosphere and relevant economic sectors in the short and long-term.

While the direct economic impact of dust storms may seem minimal compared to other major natural disasters (dust storms in China cost on average about US$6.5 billion per year), long-term consequences of dust storms may take a heavy health, agricultural and energy toll on the people who live in dust-affected areas. During dust storms, the poor air quality causes breathing difficulties, creating spikes in respiratory diseases and hospital visits.

The dust storms kick up the UAE’s fragile topsoil, causing further desertification – a degradation process by which land becomes progressively more arid – severely limiting soil productivity and damaging crops, resulting in decreased food production, which is a blow to the country’s agricultural industry.

The dust can also impact the solar energy sector, making it harder to achieve Abu Dhabi’s goal of attaining 7% of its electricity production capacity from renewable energy sources by 2020. Dust accumulates on solar photovoltaic panels, making them less effective. The suspended dust in the air also reduces the amount of sunlight that reaches the ground for solar energy capture technologies. Though researchers at Masdar Institute are investigating solar technologies that are dust-resistant and/or self-cleaning, atmospheric dust will continue to create challenges even as these technologies move toward commercialization.

Dust can also have severe impacts on land and air transportation. During a dust event, dust particles in the air reduce visibility to very low  levels, especially on roads in desert areas with no windbreaks, leading to serious accidents. Sand tends to accumulate on the highways, making it difficult for motorists driving at high speeds. Dust can also cause significant disturbances to aviation, including cancellation of flights, rerouting due to poor visibility and disturbances to airport operations.

Going forward, the researchers will investigate how dust from different regions contribute to the UAE’s dust  as well as the types of weather conditions that could trigger more severe dust storms.