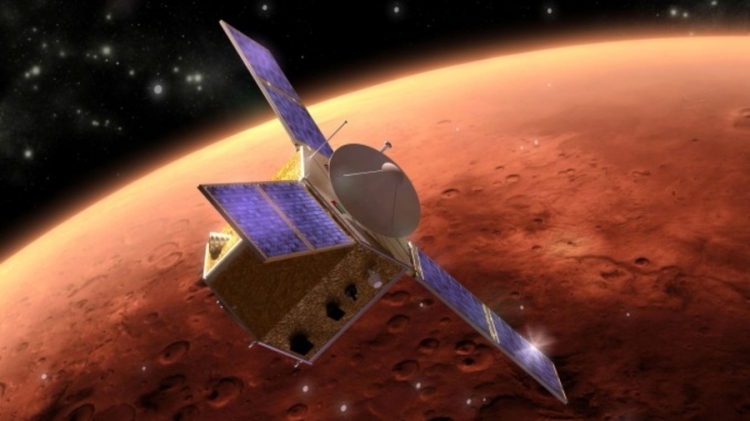 Earth and Mars have a lot more in common than you may realize. Both have polar ice caps, seasonable weather changes and observable weather patterns. The planets’ similarities and differences offer a unique research opportunity as they relate to climate change, and how each planet evolved given their unique circumstances.

The Martian atmosphere is of particular interest to the scientific community, as it relates to issues of meteorology, atmospheric origin and evolution, atmospheric dynamics, and chemical stability. The atmosphere on Mars is composed mostly of carbon dioxide and has far less pressure than that of earth – equivalent to only about 1% of Earth’s pressure at sea level. The pressure, temperature, vapour, and atmospheric composition result in a constantly dusty atmosphere.

Being able to gather and assess high quality and detailed data on critical parameters of the Martian atmosphere would allow scientists to compare Mars with Earth, which could help us understand the atmospheric evolution of not only Mars, also of Earth. That is why Mars is of particular interest to the international scientific community, and is a focus of the Emirates Mars Mission (EMM), which has a goal of sending an unmanned probe to Mars by 2020.

In response to the great scientific value of Mars and expected data produced from UAE’s successful probe, Khalifa University’s Research Center for Renewable Energy Mapping and Assessment (ReCREMA) is concentrating on the Martian lower atmosphere and meteorology as part of the center’s focus on planetary and interstellar research.

In particular, we are responding to the technical goals of the mission, which intends to use three imagers and spectrometers — Emirates eXploration imager (EXI), Emirates Mars Infrared Spectrometer (EMIRS) and Emirates Mars Ultraviolet Spectrometer (EMUS) — to characterize the state of the Martian lower atmosphere by measuring its key constituents. We are working to develop the skills and insights required to analyse the data obtained from EMM’s imagers/spectrometers. We hope to optimise the use and analysis of these data for the characterisation of the spatial structure and variability of the Martian atmospheric constituents.

The EMM instrumentation are scheduled to undertake extensive and continuous imaging of the Martian atmosphere, which would allow us to advance identification of the dust-loading mechanisms, quantification and characterisation of the mass of Martian airborne material. This would facilitate a better understanding of the color differences resulting from the solar phase angle when using reflectance spectroscopic from EMIRS and EMUS and multicolour imaging from EXI in applying corrections when inferring composition measurements.

The temperature profiles of Martian latitudes throughout its seasons will also be obtained, which, when analysed and integrated with analog, seasonal and spatial thermal tidal amplitudes, can be synthesized into Mars global climate and circulation models. Data that will be obtained over continuous and long periods of time would inform on the interannual climatic variability, quasi-periodic climate variations, and long-term climate change. This would result in an improved knowledge of the Martian climate, which is expected to significantly improve predictions of Mars’ atmospheric circulation and meteorology.

Our goal is to build local capacity in atmospheric modelling methodologies for the Martian lower atmosphere, to extend the satellite image processing knowledge developed at Khalifa University to the specific characteristics the Martian land cover and atmosphere. Given the in-house expertise developed at ReCREMA in dust mapping and modelling, special focus has also been given to broaden the acquired knowledge to the modelling of dust storms on planet Mars and relate them to the surface mineralogy and meteorology.

By developing these capabilities, the planetary and interstellar research at the ReCREMA is expected to contribute to the development of the science and technology sector in the UAE and enhance UAE’s contribution to the international and global space science community.