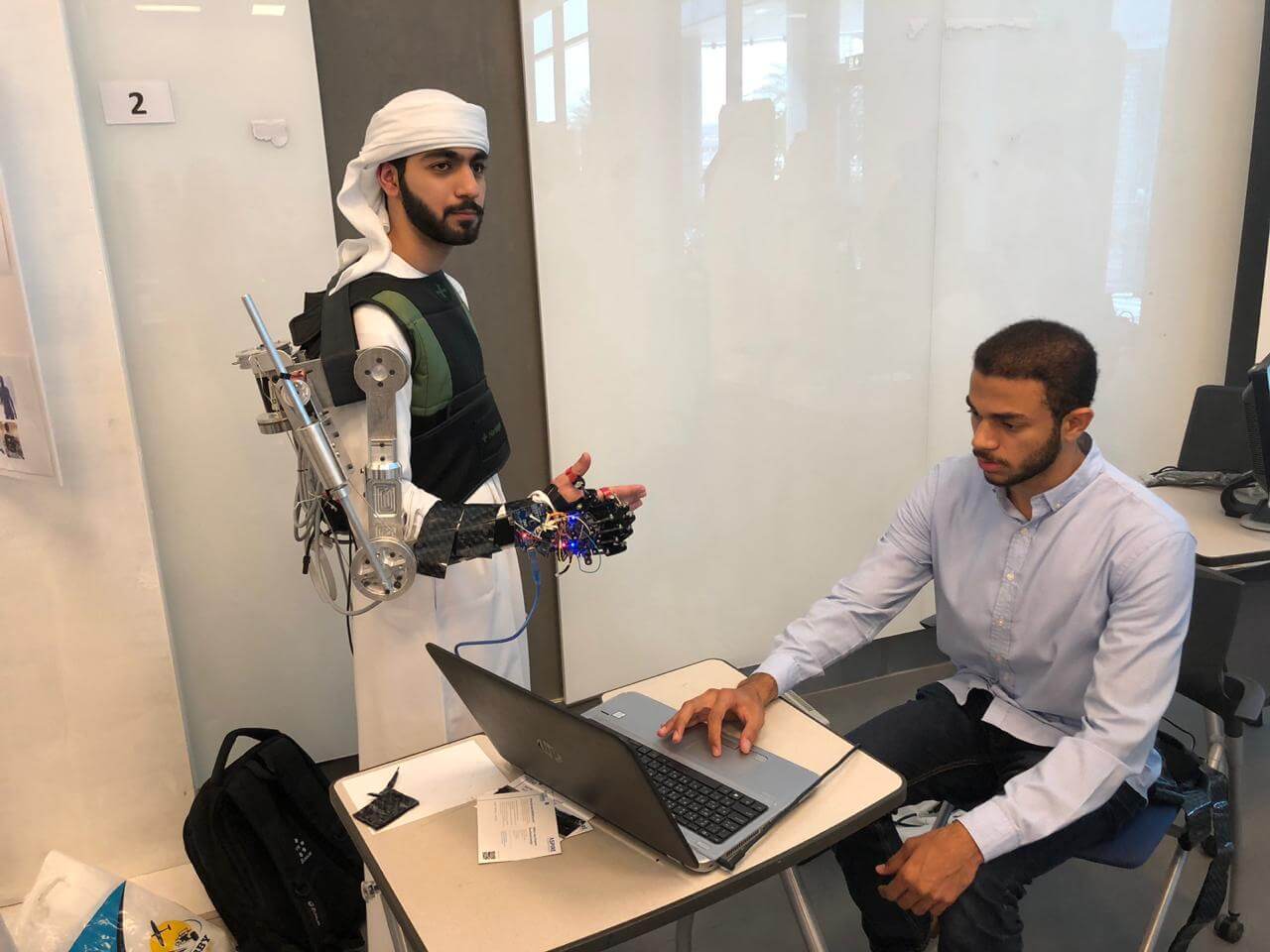 A team of senior engineering students at Khalifa University have created a wearable exoskeleton to help construction workers carry heavy loads. The Upper Body Exoskeleton multiplies the wearers’ strength, which could help all kinds of people in the future – from the elderly to people who have lost control of their arms – carry things around more easily and gain greater mobility.

The lightweight, low-cost exoskeleton is made primarily from marine grade aluminum. The entire system weighs only 7.5 kilograms, making it one of the lightest powered aiding machines in its category.

The team reports that a person wearing the KU exoskeleton can carry objects up to 25 kilograms without causing any muscle fatigue, by distributing the weight across the whole body.

The exoskeleton consists of two major parts: a back plate and an arm support. The back plate is made of reinforced carbon fiber and it is attached to a vest that is strapped around the body. The vest stores the major electrical components, including the battery, which can power the entire exoskeleton for up to two and a half hours, the 90-watt motor, which gives the exoskeleton the ability to lift heavy weights, and the main controller, which controls how the exoskeleton moves in terms of speed and position.

The motor’s lifting power is transferred to the arm itself via a steel cable. Whenever the motor rotates, the arm rotates with it, mimicking natural arm muscle movements.

“We developed the exoskeleton by looking at the natural movements and joints of the human body. We then created artificial joints for the exoskeleton arm, so that it can move in the same profile as a person’s actual arm,” said Ali Mohammed Soliman, aerospace engineering student and project lead. He developed the project with team members Majed Alhammadi, Badar Alzaabi and Abdullah Alhammadi for the KU Senior Design Project (in course AERO497), under the supervision of Dr. Dongming Gan, Assistant Professor of Robotics.

“When an arm muscle contracts, the other arm muscle relaxes and vice versa. This is how the cable functions. As for the arm part, it was primarily designed to match almost all of the normal human’s arm joints, motions, and degrees of freedom. It consists mainly of bars and bearings that mimic a human’s arm shape and method of moving in order to not be cumbersome for the wearer,” Soliman added.

Another unique feature relates to how movement of the exoskeleton arm is controlled. The arm is controlled through ‘somatosensory gloves’, which read each finger’s motion and convert their movements into commands that the arm can follow. By moving the fingers in a certain way, the arm either lifts, drops or stops the motion in response. This feature makes the exoskeleton particularly useful for patients who have lost mobility in their arm, but still have full control over their fingers.

Finding ways to make exoskeletons that will work in better harmony with the human body is critical to the development of effective exoskeleton supports.

“Exoskeletons are still an emerging technology,” Soliman shared. “And we would like to be on the forefront of discovering and developing this specific frontier.”

An exoskeleton is an external frame worn to support the body. Worn as responsive leg braces, arm supports, or full-body suits, they essentially “motorize” muscles, augmenting a person’s natural strength and mobility. Powered by a system of electric motors, these wearable, external frames give limbs extra movement, strength and endurance.

Although there are hundreds of commercial and experimental exosuits now operating globally, many of them are too big and bulky, and expensive. The KU Upper Body Exoskeleton is extremely lightweight, weighing in at 7.5 kg, and perhaps most importantly, it is inexpensive.

“The entire exoskeleton was developed using approximately AED10,000. Actual exoskeletons that are available in the market range from US$100,000 to US$250,000,” Soliman said.