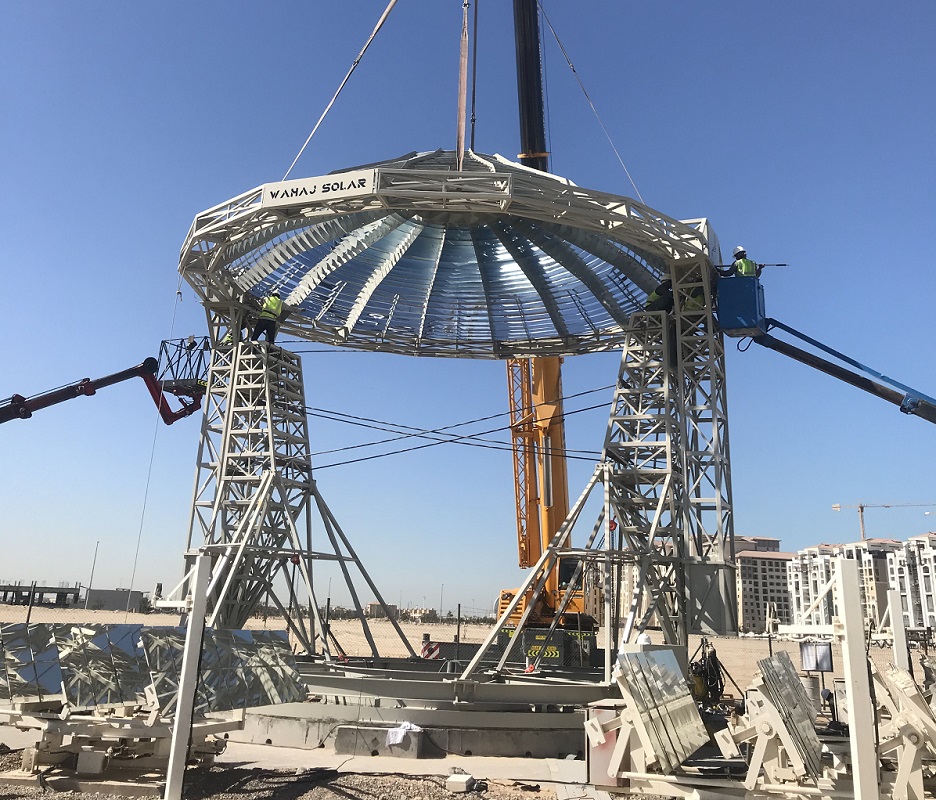 The ASC10 model, a 10-meter diameter pre-commercial scale solar concentrator, designed and developed by UAE-based Wahaj Solar, is located at the Masdar Institute Solar Platform (MISP) located at Masdar City. The MISP is also part of the Masdar Solar Hub, which was launched in 2015 with focus on accelerating and testing pilot scale solar technologies.

The newly installed concentrator – a metallic reflector-based giant Fresnel lens with fixed focal point relative to the ground – will offer a concentration ratio close to 1000 suns and temperatures above 1000 degrees Celsius, enabling the system to achieve higher temperature with less mirror surface, compared to conventional CSP systems. It can be combined with a more efficient high-temperature power generation system, helping to convert more solar energy into electricity. Moreover, high temperature thermal energy storage can be integrated with the ASC10.

Dr Arif Sultan Al Hammadi, Executive Vice-President, Khalifa University of Science and Technology, said: “The installation of UAE’s first-of-a-kind solar concentrator marks the next stage of Masdar Institute Solar Platform’s advancing research in solar energy technologies. The MISP stands as an example for innovation and we are keen to contribute to seeking new solutions to increase efficient clean generation of 24/7 power, which remains one of the strategic areas for the UAE. We believe the MISP will further enhance its significance to innovations in the energy sector, especially solar power, while attracting more industry collaborators.”

Motasim Al Daour, majority shareholder at Wahaj Solar, said: “After realizing the potential of the ASC technology and its coherence with UAE policies regarding innovative solar energy reliance especially in the topic of CSP, we decided to invest in developing and verifying the ASC and to introduce this breakthrough technology to the world from UAE. We are setting a unique example in the region where a private small company is created for the sole purpose of developing innovative new products with completely private investments”.

“Through combining technologies in power generation and storage, solar energy is becoming an increasingly reliable provider of electricity at night as well as during the day,” said Yousef Baselaib, Executive Director for Sustainable Real Estate at Masdar. “The launch of the UAE’s first Solar Concentrator at Masdar City will help to accelerate this exciting industry development, while providing further evidence of the potential for homegrown innovation here in the UAE.”

“As the natural home for innovation in clean-tech and sustainable urban development, Masdar City is delighted to be working alongside Khalifa University and Wahaj Solar to support R&D into concentrated solar power, a sector where Masdar is already playing a leading role. The Solar Concentrator will also complement other pilot projects hosted at the city and attract even more clean-tech businesses to Abu Dhabi and the UAE.”

Wahaj Solar proposed an innovative metallic-reflector-based Fresnel lens beam-down concentrator, called Ayman solar concentrator (ASC). A 40cm-prototype of this was successfully demonstrated in 2016 in Jordan. Based on this laboratory-scale proof-of-concept and an optical model, a new design of a 10-meter diameter pre-commercial scale unit was developed. This is currently under experimentation at the MISP in Masdar City. The system is protected by patents registered in the US, European Union Countries, GCC, and the World Intellectual Property Organization covering 150 countries worldwide.

Dr. Ayman Al-Maaitah, the inventor of ASC and the managing partner of Wahaj Solar said: “We have decided to launch this breakthrough technology form the UAE because of its vision in supporting innovation especially in the solar energy field. Khalifa University strongly declares its devotion to research and development and support of innovation. The Masdar Solar Platform at KU is an ideal location for testing and verifying new innovative solar technologies which will help us to obtain a verification from a respected third party of our system and hopefully to further develop its applications. “

With the newly installed concentrator, Khalifa University can develop other relevant projects to work on high-temperature thermal energy storage systems including thermochemical energy storage or solar fuel production. At a later stage, this could even lead to consider solar metallurgy by melting metals such as aluminum with solar energy alone.