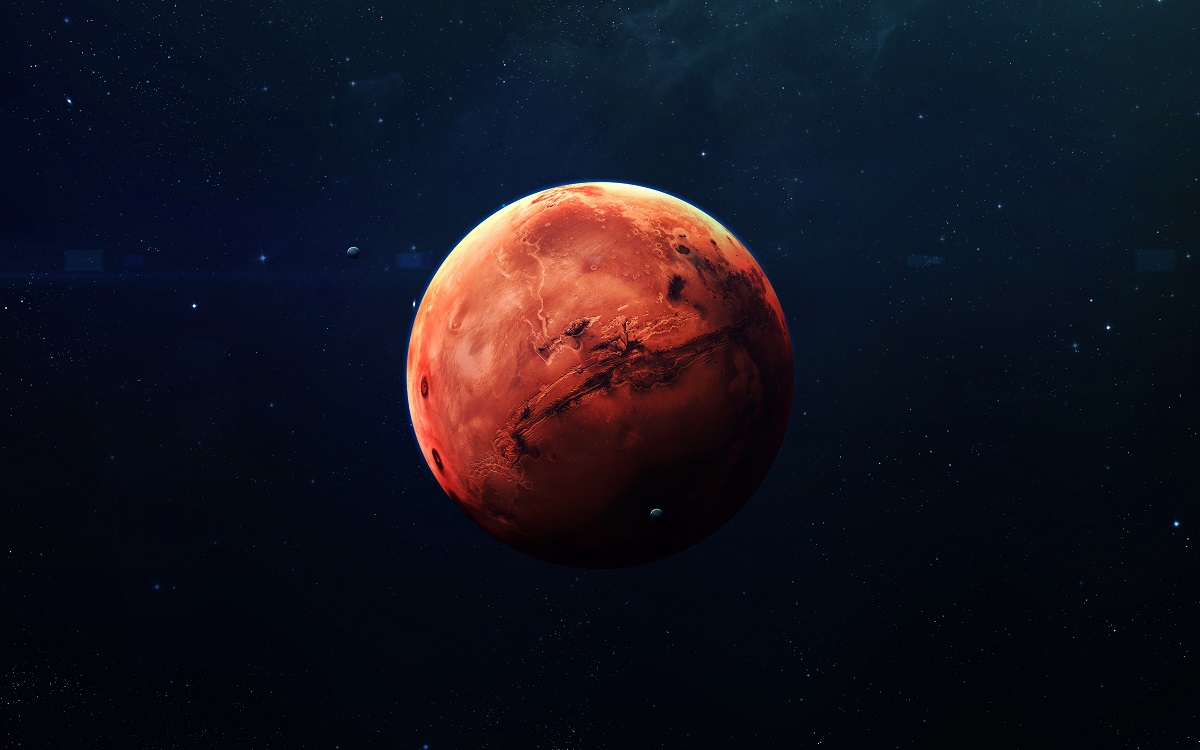 “Orbital magnetometers and the InSight lander discovered strong crustal magnetic fields in some regions of Mars, despite the lack of a detectable core dynamo,” explained AlHantoobi to a room full of respected and established researchers in their field. “This strong crustal magnetism is unexplained given that previous models of Mars’ ancient core dynamo are of approximate strength to Earth’s current field and would not produce such strong remnant magnetization if Earth-like lithologies are assumed. However, the crust on Mars is more iron-rich than Earth’s crust, which may lead to rocks with significant proportions of magnetic phases such as magnetite, hematite, pyrrhotite, and titanomagnetite.”

The lithology of a rock unit is the description of its physical characteristics to map and investigate areas by correlation between different rock types.
The dynamo theory proposes a mechanism by which a celestial body, such as Earth or Mars, generates a magnetic field, a process through which a rotating, convecting, and electrically conducting fluid can maintain a magnetic field over astronomical time scales. This conductive fluid in a geodynamo, like a planetary body, is liquid iron in the outer core, with the magnetic field induced and maintained by the convection of the liquid iron in the outer core. As the

Earth rotates, the Coriolis effect supplies the rotation in the outer core, and it is this rotating fluid that induces the magnetic field.

While Mars lacks a detectable magnetic field of global scale, it boasts a rich spectrum of magnetic fields at smaller spatial scales. On average, the Mars crust is ten times more intensely magnetized than the Earth’s, and theories suggest that the Mars crust acquired this remnant magnetism from its dynamo shutting down for reasons as yet unknown.

“Previous models of Mars’ ancient core dynamo suggest that its strength was similar to that of Earth’s current magnetic field and would not produce such strong magnetic anomalies as seen,” explained AlHantoobi. “We know that Mars contains more iron than Earth when considering proportions, so the presence of very iron-rich rocks isn’t unexpected in the crust.

The Mars Global Surveyor Mission in 1996 provided a wealth of data into Mars’ evolution and the magnetic record of the crust. However, its data was collected from orbit, at great distance from the rocks containing the history of the planet’s magnetism. Until space exploration missions can use surface or aerial magnetometer surveys or even return a piece of Noachian crust (from an early time period on Mars) to Earth, researchers like AlHantoobi are using the data they already have to propose explanations for the remnant magnetism.

When an igneous rock, formed through the cooling and solidification of magma or lava, cools, it acquires a thermoremanent magnetization (TRM) from the Earth’s field. This remanence can be very stable and last without significant change for millions of years. If a rock is heated above its Curie temperature— the temperature above which certain materials lose their permanent magnetic properties—it can be permanently demagnetized.

“The lack of magnetic anomalies in regions with large impact basins and large shield volcanoes implies that Mars’ dynamo shut down before heavy bombardment and volcanism,” said AlHantoobi. “Magnetic minerals in regions of volcanic activities are susceptible to heat above the Curie temperature, leading to demagnetization if the global magnetic field is no longer present.”

It appears that around four billion years ago, the global magnetic field on Mars collapsed. Now, the history of its magnetic field is archived in its crust.

“We can see that in the five regions where Mars’ crustal field is particularly strong, there is a strong positive correlation coefficient between magnetic field strength and iron content,” said AlHantoobi. “It’s possible that this is due to thermoremanent magnetization of iron-rich basalt with abundant single-domain magnetic carriers such as magnetite, and therefore high magnetic susceptibility.

“This theory hasn’t been explored before. We used a model of the magnetic field created using data from the Mars Global Surveyor mission and MAVEN, and mineral maps from TES to explore the potential relationships between the magnetic field observed and the mineralogy of the Martian crust.

“A possible explanation for some of the strong crustal magnetic fields observed from orbit is local mineralogical enhancements of those regions,” explained AlHantoobi. “Therefore, Mars’ ancient core dynamo does not need to produce an extremely strong global magnetic field to explain the strong magnetic anomalies. Instead, the rocks may be much better recorders for the magnetic field than typical lithologies available on Earth.

Research such as AlHantoobi’s is crucial for better understanding the universe around us and offers unprecedented access to the history of Earth’s nearest planetary neighbor. NASA’s InSight lander touched down on Mars in November 2018 to investigate the Martian crust and measure the strength and direction of the planet’s magnetic field, among many other intelligence gathering missions. Data from InSight will hopefully clarify whether the strong magnetic signal coming from the rocks beneath the lander is coming from rocks deep underground or closer to the surface. If the magnetism is coming from rocks nearer the surface, it would imply the strong magnetic field persisted around Mars for longer than currently thought.

Additionally, the Hope Mars Mission from the Emirates Mohamed Bin Rashid Space Center will study the atmospheric layers of Mars and help explain how the collapse of the planet’s global magnetic field contributed to the stripping of the atmosphere that could have sustained liquid water. Understanding the magnetic history of the red planet could help researchers determine whether there ever was any life on Mars.