How Agricultural Waste Can Contribute to the UAE’s Food, Water and Energy Security 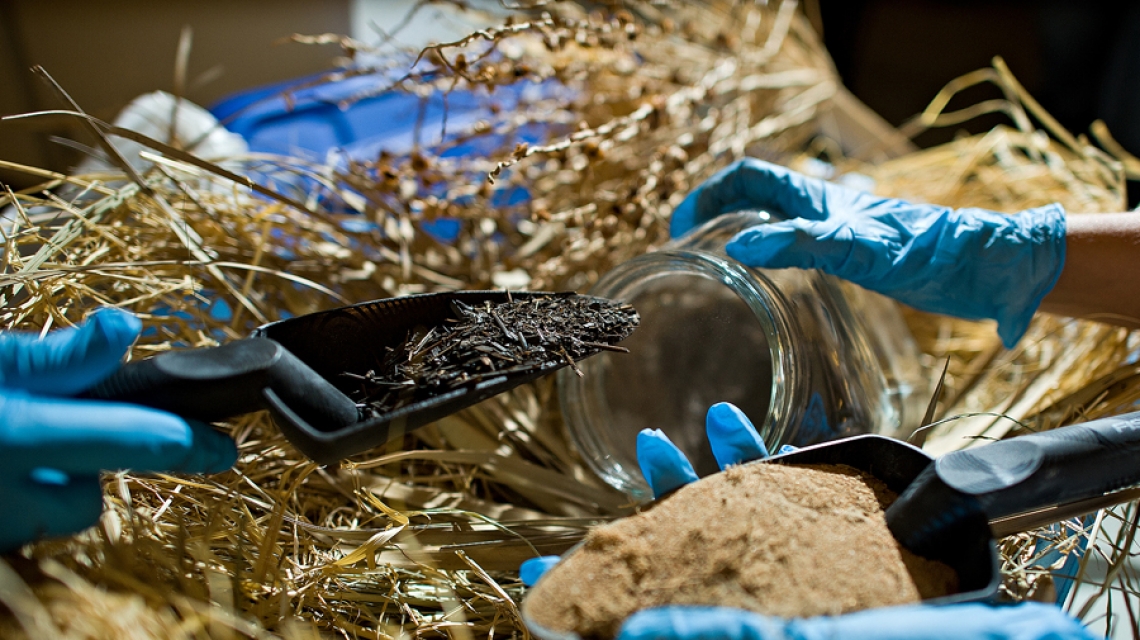 Masdar Institute researchers are converting agricultural waste into a valuable resource that could significantly bolster the UAE’s ability to produce locally-grown food sustainably – critical innovations that respond to the food-water-energy nexus.

“Agriculture is inseparable from water, energy, and the environment,” said Dr. Lina Yousef, Assistant Professor of Water and Environmental Engineering at Masdar Institute. She leads several projects that look to improve the UAE’s agricultural productivity, some of which were showcased at the Global Forum for Innovations in Agriculture (GFIA) – a summit designed to catalyze innovations for sustainable agriculture – held earlier this month in Abu Dhabi.

“The UAE’s agricultural sector is the largest consumer of water, accounting for a substantial amount of the country’s freshwater use, and it takes a lot of energy to generate freshwater. We are developing technologies that will help promote more efficient crop growth in a way that does not squeeze the UAE’s precious freshwater,” she added.

The food-water-energy nexus is felt deeply in the UAE. Water and energy are required to produce food, and in the UAE, energy is required to produce water, making these three critical resources interlinked. The nexus is impacted by the UAE’s shrinking groundwater levels, which are reducing by 0.5 cm per year, requiring more of the country’s freshwater needs to be met by energy-intensive desalination methods. These methods currently produce 40% of the country’s freshwater, but that number will likely increase in the coming years as the country’s population grows.

The UAE’s agricultural sector is a significant user of the country’s limited and precious resources, accounting for approximately 72% of the total freshwater consumed. However, despite its large water footprint, the agricultural sector produces less than 20% of the UAE’s food. The remaining 80% is sourced through imports.

The UAE government is keen to increase agricultural productivity to achieve greater food security in a way that does not negatively impact the country’s water and energy conservation efforts. In response to this need, Dr. Yousef is developing technological innovations that will help farmers grow more crops with less water.

Her research leverages the waste generated by farmers – agricultural waste represents roughly 7% of the UAE’s non-hazardous solid waste – to develop soil enhancement technologies that can help UAE farmers grow more food in an energy-efficient way, thus supporting sustainable crop growth and greater water, food and energy security. This technology also provides the country with a way to transform its agricultural waste, which would otherwise end up in landfills, into a valuable product.

Soil quality is key to sustainable agriculture, which is why Dr. Yousef’s project is aimed at improving the UAE’s soil productivity potential. The soils in the UAE are severely affected by desertification – the degradation of land, especially in dry climates, caused by the erosion of topsoil.

To improve the structure of soil so that plant roots can absorb water more easily and thus grow more efficiently, Dr. Yousef is looking to add an important element – carbon, made from organic agricultural waste – to the soil.

“Using the process of pyrolysis – decomposition brought about by high temperatures – we intend to turn readily available green farm waste into an inert form of carbon known as ‘biochar’, which can then be mixed back into the soil. Such material is otherwise wasted in landfills or burned – neither of which is environmentally ideal,” she explained. Biochar also helps sequester atmospheric carbon dioxide into the earth as soil carbon, which will help the UAE achieve its carbon-emission reduction goals.

In addition to agricultural waste, Dr. Yousef is looking at other waste streams that she believes can be leveraged to improve the fertility of soils and their ability to retain water.

“My team is developing formulations from water-absorbing minerals that, when mixed with different clay residues, produce high-quality residues that are rich in carbon, phosphorus and nitrogen, which could enhance the fertility of UAE’s soils,” Dr. Yousef explained.

“Our goal is to improve water-use efficiency, fertility and soil texture so erosion is limited and crop yields are enhanced,” Dr. Yousef said.

The UAE’s ability to feed its people without straining its water and energy resources requires innovative technologies that support sustainable agriculture. The solutions being explored at Masdar Institute aim to help increase sustainable crop production from UAE farms while conserving groundwater and reducing overall water consumption, which would in turn reduce over-reliance on energy-intensive seawater desalination, thus contributing to greater energy, water and food security in the UAE.