Getting More Energy out of Sunlight 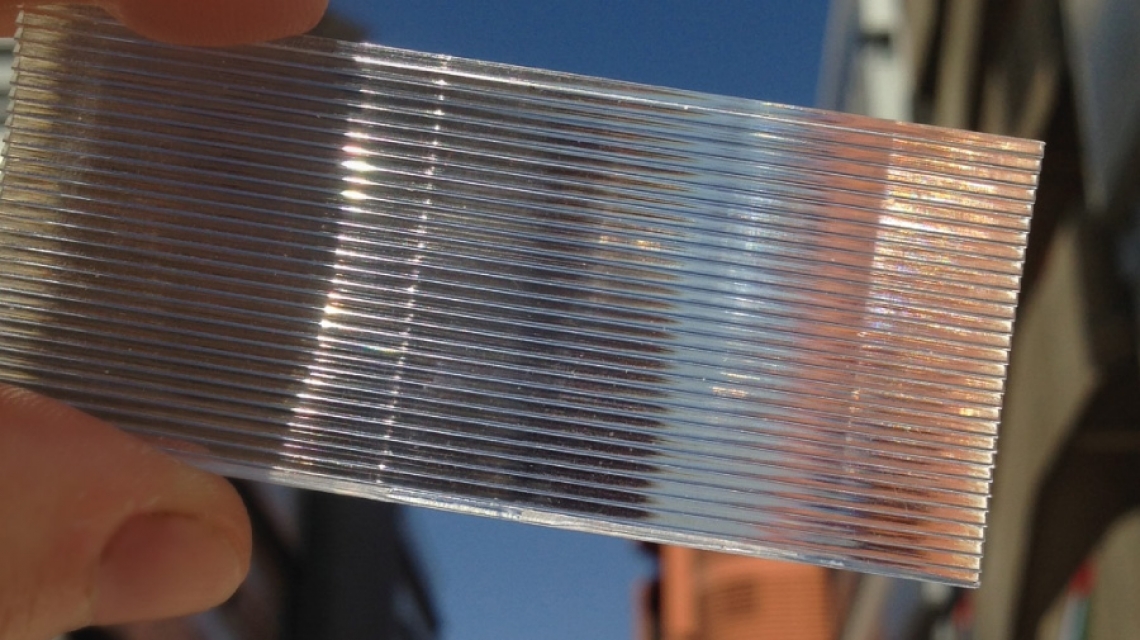 “The spectral splitting concentrator we have designed for this promising solar energy capture technology is a combination between a prism, which separates the different colors or wavelengths of sunlight, and a lens, which concentrates the light,” explained Masdar Institute PhD student Carlo Maragliano.

In a traditional silicon-based photovoltaic (PV) cell, only some of the sun’s wavelengths from the visible light spectrum are absorbed and converted into electricity.  Much of the sunlight at the shorter blue and green wavelengths is inefficiently absorbed – and none from the infrared region is absorbed – resulting in conversion efficiencies between 15% and 18% in commercial modules.

With Maragliano’s novel optical device – which disperses and concentrates visible and infrared light – each slice of the solar spectrum is absorbed by spectrally-matched solar cells, significantly increasing conversion efficiencies up to a theoretical maximum of 38%.

Currently, multi-junction solar cells, which feature multiple vertical layers of materials geared towards absorbing specific wavelengths of light, are considered to be among the most promising solar technologies, with efficiencies upwards of 40%. For example, the top layer may be designed to absorb blue light, while the bottom layer designed to absorb red light. However, the complex fabrication required to build multi-junction solar cells is costly and imposes a severe constraint on the type of materials that can be used in the solar cell.

To overcome this challenge, the optical device developed at Masdar Institute enables solar cells to absorb a fuller range of the solar spectrum in a side-by-side position rather than a stacked one.

“Stacking solar cells requires tight lattice matching of mono-crystalline materials,” Maragliano explained. “One way to avoid stacking the cells is to disperse the sunlight laterally, so that the energy-matched solar cells can be placed side-by-side. Because each cell is independent of the others, it allows for a wider range of materials that can be used to create each solar cell and significantly reduces the fabrication costs.”

Being able to fabricate the solar cells independently is only one aspect of the proposed solar harvesting system that makes it affordable. The optical device itself is made out of polycarbonate – a transparent, inexpensive plastic material – and is fabricated by injection molding, which allows for economical mass-scale production.

The device is designed to simultaneously separate and concentrate the sunlight, feeding the highly-concentrated beam of each wavelength to energy-matched solar cells, allowing for high optical efficiency.

“The idea is to make the light of a given wavelength coming from different prisms land on the matched spot on the receiver plane,” Maragliano stated. “We do this by arranging several prisms on a curved shape in such a way so that each wavelength lands on the focal plane.”

Concentrating sunlight onto a solar cell, a technology known as concentrating photovoltaics (CPV), is a way to convert solar energy to electricity with high efficiency due to the concentration of sunlight on solar cells. CPV systems use optical equipment, such as lenses and mirrors, to focus great amounts of solar energy onto high-efficiency multi-junction solar cells. The disadvantage of CPV systems, however, is that they typically utilize expensive multi-junction solar cells and require precise tracking of the sun to maintain focus of sunlight on the cells throughout the day.

Pairing solar cells that absorb energy from separate slices of the solar spectrum with a low-cost optical device that both concentrates and disperses sunlight, Maragliano and Dr. Chiesa have designed a highly efficient solar energy harvesting system that could be a fraction of the price of most commercially available solar technologies.

“We know that layering solar cells dramatically improves the overall efficiency of the cells, and we also know that concentrating sunlight can produce more electricity. So, we created a device that can essentially do both, in an economical and convenient way, without the requirements of a CPV-type mechanical tracking system or complex layering required in multi-junction solar cells,” Dr. Chiesa explained.

Dr. Chiesa hopes to commercialize this viable technology within the year, to mark the UAE’s Year of Innovation. “A truly innovative device like this is an answer to the UAE leadership’s call for innovation,” he added.

The spectral splitting concentrator is one of many innovative solar technologies being developed at Masdar Institute, which aims to boost the efficiency of solar cells in order to increase the sun’s role in the global energy supply.