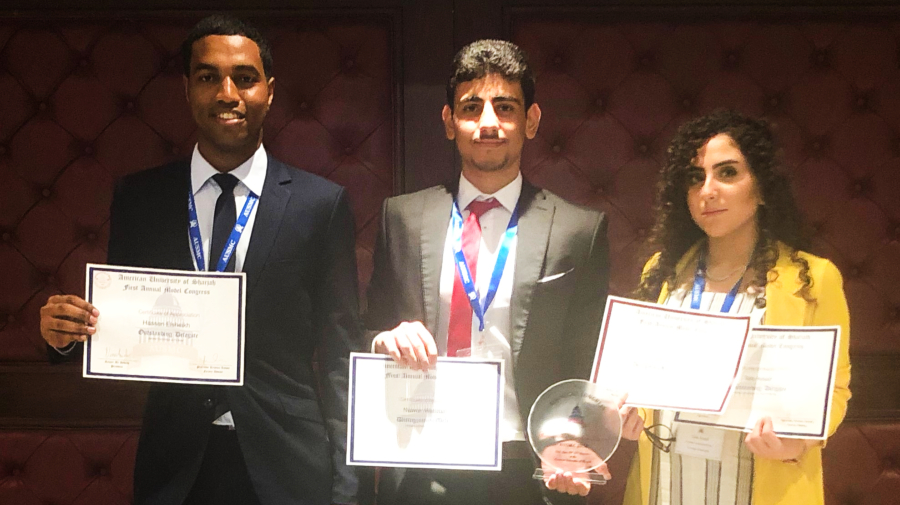 Three members of the Khalifa University Debate Club won the Best Delegation Award for their excellent overall performance at the first American University of Sharjah Model Congress (AUSMC) 2018, which was held on 15-17 November in Sharjah. A total of 20 teams and 273 delegates participated in the congress.

Allabban said: “The competition gave me the opportunity to meet people from different backgrounds. It was an honor to represent Khalifa University at such a competitive challenge, and I am looking forward to being a part of the upcoming events.”

The first of its kind in the world, AUSMC seeks to bring the vibrant and dynamic workings of the US Congress to university and high school students. The student participants were able to test their debating and negotiation skills in a wide variety of situations and scenarios modelled
around the US Congress.

Elsheikh said “My experience at AUSMC gave me insight into how complicated matters such as passing legislation and enacting laws are done in one of the world’s most complex political systems. It was a great honor to be awarded the Outstanding Delegate Award in my committee
and the experience as a whole was incredible!”

For Assaf, it was a thrilling and informative conference. She said: “From the US Constitutional law to the bills written to find a cohesive solution, the AUS Model Congress was an inclusive platform. I enjoyed every moment and learnt a lot. I also realized that what we say and how we
say it, could have the most profound impact on others. That adage will resonate with me forever.”