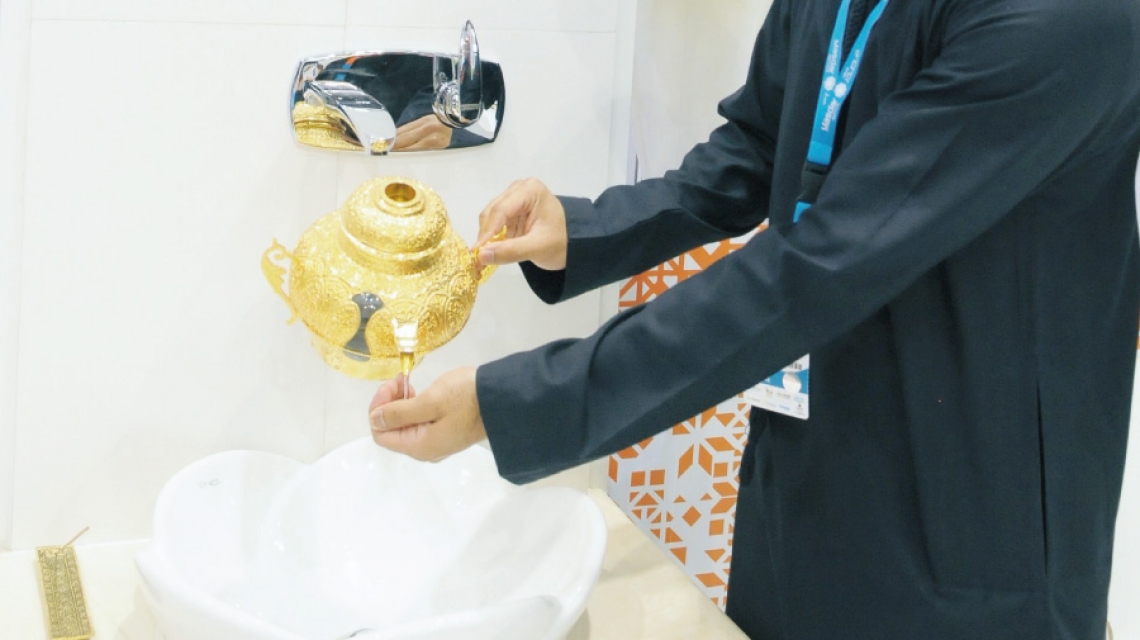 Abu Dhabi-UAE: 14 July, 2015 – As mosques across the UAE experience their maximum water consumption during the heavily-attended Ramadan prayers, a novel device from a Masdar Institute and UAE national faculty and student is being eyed with the promise of water- and cost-savings.

Dr. Ahmed Al Jaberi, Assistant Professor of Mechanical and Materials Engineering at Masdar Institute, is working with PhD student Mohamed Al Musharrekh to develop a water-saving device for mosques that promises to save up to 95% of water during the pre-prayer ablution process known as wudu. They are currently in the final preparation stages of getting their wudu device installed at a number of mosques in the capital to test and demonstrate its ability to save precious water.

“With Ramadan greatly increasing attendance in mosques, the time is ripe for a new, affordable and easy-to-use device that can save water during wudu,” Dr. Al Jaberi explained.

The sustainable and ornately-designed wudu device can help reduce water-wastage by informing users of how much water they have used while performing their wudu. The device displays levels for water usage and can easily be attached to mosques’ water faucets without any changes to existing infrastructure.

After the device is filled with water, the user will tip the device down to wash. The device automatically goes back to the upright position once it is released, limiting waste and restricting the user’s total water consumption to the amount held by the device, which is 1.2 liters. There is a line on the device at 600 milliliters, to encourage users to use this amount of water, as this was the amount used by the Prophet Muhammad and thus is a guideline for how much water should be used for making wudu.

“My traditional, easy-to-implement and easy-to-use device offers a solution to the national need to conserve water,” Dr. Al Jaberi said, adding: “The culture of innovation permeating Masdar Institute is what makes inventions like this wudu device possible.”

Wudu is the ceremonial washing of hands, face, arms, neck and feet before Islamic prayer. Though it traditionally is meant to use only half a liter of water, fast-flowing taps coupled with bad habits, such as letting the water run while rolling up sleeves or removing socks, often result in far higher consumption. The result is instead of using 600 milliliters of water to complete prayer, it has been estimated that the average Muslim uses roughly 24 liters of water. Over the course of the day (which includes five prayers), that can amount to 120 liters. Such unnecessary water for wudu is even more problematic in a country like the UAE, which is both predominantly Muslim and ‘highly water scarce,’ relying on treated seawater and limited groundwater for its freshwater needs.

In response to the UAE’s need to preserve water while honoring Islamic values, Dr. Al Jaberi’s device, which he has developed with the support of his student Al Musharrekh, will enable users to easily use the prescribed 600 milliliters of water for wudu while minimizing waste.

Al Musharrekh said, “We plan to test the first model of our device during Ramadan by fixing it onto some of the faucets in one of Abu Dhabi’s mosques. We will fix flow meters onto all the pipes in order to measure the water consumption for the pipes that use the wudu device and for the pipes that don’t. Then we will determine the real savings from the device.”

UAE officials have been keen on reducing water consumption in mosques for years, taking concerted efforts to equip mosques with water-saving technologies. They believe such efforts could help lower the UAE’s high per capita water consumption – which is currently pegged at about 500 liters per person per day.

In 2012, a team of Abu Dhabi-based university students won a US$5,000 award to implement their ‘green wudu’ idea, which collects used ablution water for re-use as landscape irrigation around the mosques.

And in 2010, 20 self-stopping taps were installed in the Abu Hamed Al Gazali Mosque in Dubai, dropping consumption by over 15,000 gallons, or 30% of total consumption. The new taps reduced consumption from 45,509 gallons in one month to 30,205.

“These efforts reflect the UAE’s commitment to sustainability, while supporting the message of the Prophet Mohammad, who said, ‘Do not waste water, even if you perform your wudu on the banks of an abundantly-flowing river,’” said Al Musharrekh.