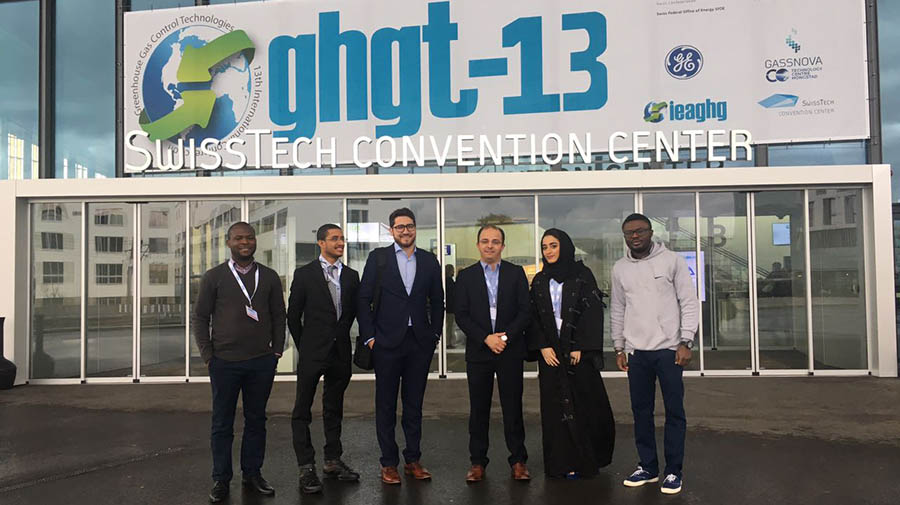 The prestigious conference attracted over 1,100 delegates and facilitated networking opportunities among leading scientists involved in carbon capture and storage (CCS) research to accelerate the development of deployment-ready CCS technologies. Such technologies are expected to play a significant role in reducing the amount of carbon dioxide (CO2) – the harmful, heat-trapping greenhouse gas responsible for warming the planet – in the atmosphere.

The research presented by the MI team focused on various post-combustion and oxy-fuel combustion technologies for capturing CO2 from the smokestacks of the fossil fuel-fired power plants that emit them and burying that captured CO2 underground. Some of the research also focuses on using captured CO2 for enhanced oil recovery, or to produce industrial chemicals, fuels and other high-value products.

As a regional expert in the development of carbon capture, utilization and storage (CCUS) technologies, Dr. Abu Zahra acted as a member of the conference technical program committee and chaired five of the conference’s technical sessions, including the sessions on Solid Sorbents, Liquid Biphasic Solvents, Solvent and Configuration Modelling, Alternative Solvents, and Solvents Properties.

Ustadi co-authored two of the papers presented at the GHGT conference. The first, titled “The Effect of CCS Technology Deployment on the Natural Gas Market in the UAE,” reveals that if 60% and 90% CO2 is captured and used for enhanced oil recovery, a net amount of 5.32 and 21.16 million metric tons of natural gas will be saved yearly, respectively.

Ustadi’s second paper, titled “Potential for Hybrid-Cooling System for the CO2 Post-Combustion Capture Technology,” explored different cooling technologies that would reduce a CCS system’s energy and cooling water demand, including a hybrid cooling approach that uses a steam condenser, which was found to be cheaper than using a water cooler and only marginally more expensive than a traditional air cooler.

Bueno co-authored a paper titled, “The Evaluation of Oxy-Fuel Combustion Deployment at the Mirfa Plant in UAE,” in which he explored the opportunity to use the waste oxygen produced at Abu Dhabi’s Mirfa Plant – a co-generation water and power plant – for a more energy-efficient form of carbon capture. In oxy-fuel combustion, pure oxygen is combusted with the fossil fuel, producing only CO2 and water and as a result, simplifying the CO2 separation. Producing pure oxygen is an expensive, energy-intensive process, which is why re-using the waste oxygen from the Mirfa plant would significantly reduce the cost of oxy-fuel combustion.

In a paper co-authored by Al Hinai, titled “Amine-Blends Screening and Characterization for CO2 Post-Combustion Capture,” he explores how to use multiple amines to absorb CO2, to increase amines’ CO2 absorption capacity and to reduce the amount of heat required to release the CO2 from the sorbent.

Dindi presented a poster, titled “Performance of Activated Fly Ash Impregnated with PEI for CO2 Post-Combustion Capture.” He described his research on the development of a low-cost solid adsorbent material (a chemical compound that adsorbs CO2) made from a waste material, like fly ash, which is the ash by-product produced when coal is burned.

Ogungbenro presented a poster on the ability to use local date seeds as a feedstock for generating activated carbon – a material with excellent adsorption (the ability for CO2 to stick to a material so that it can be subsequently removed). In his paper, titled “Activated Carbon from Date Seeds for CO2 Capture Applications,” Ogungbenro explained how the local date seed has good CO2 adsorption capacity.

Quang presented the poster, “The combination of CO2 Utilization and Solid Sorbent Preparation in One Step Process,” in which he proposed a simple, one-step process for synthesizing a novel solid adsorbent chemical compound for efficient CO2 capture.

Dr. Nashef presented a poster, titled “Novel Green Solvents for CO2 Capture” that explains the work of PhD student Idowu Adeyemi on using environmentally-friendly novel solvents for the capture of CO2. These novel solvents have several advantages compared to the amine-based aqueous solutions, including low volatility, no degradation, higher thermal stability, and lower energy consumption. In addition, these novel solvents can be easily prepared from commercially available, low-cost compounds.

The Masdar Institute team’s CCS research responds to critical environmental challenges in the UAE and wider world. Natural gas-fired power and water desalination plants are responsible for more than one-third of UAE’s CO2 emissions. While across the globe, greenhouse gas-emitting fossil fuels still power nearly 93% of power stations and industrial plants, venting high levels of CO2 into the atmosphere every day.

Through its pioneering research, Masdar Institute is becoming a regional leader in the effort to develop sustainable CCUS solutions needed to reduce greenhouse gas emissions, with the aim of limiting global temperature increase to less than 2° Celsius relative to pre-industrial levels.

Held once every two years, the GHGT conference series has established itself as the principal international conference on greenhouse gas mitigation technologies, especially on CCS.