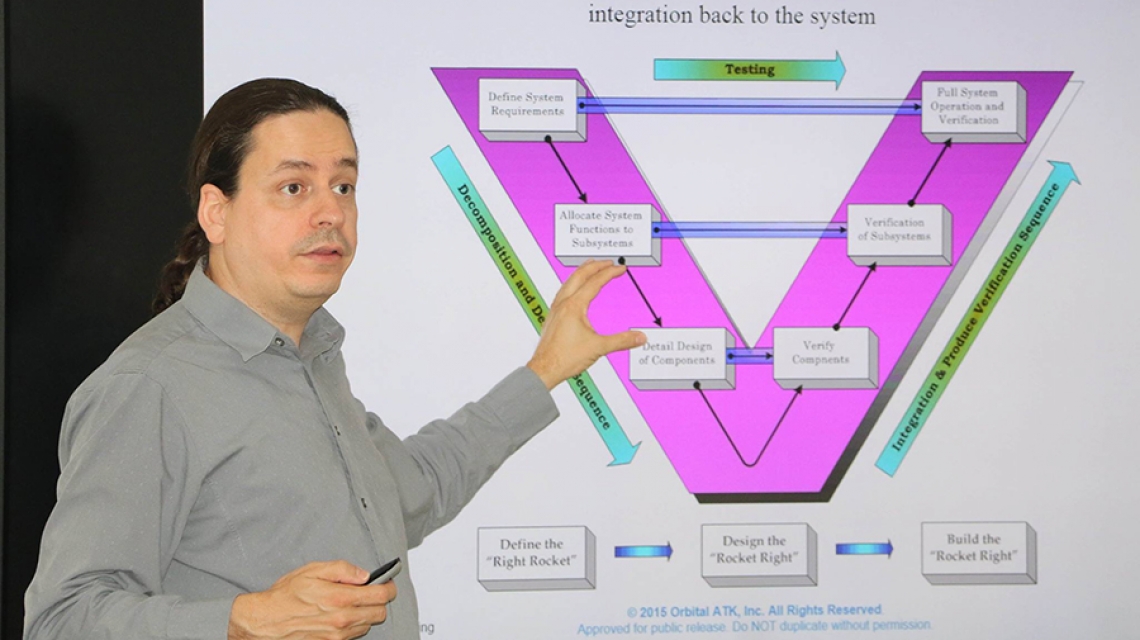 Niederstrasser was speaking at the seminar organized on campus on 19 June. The lecture was designed to help students in Masdar Institute’s Space Systems and Technology concentration to learn more about CubeSats and be able to formulate a relevant thesis topic relating to them.

Niederstrasser said:“One of the primary purposes of universities is to develop the country’s human capital in science and technology,. Moreover, nearly 95% of the educational goals of this program are met the moment the satellite is delivered to the launch vehicle. University programs are always about workforce development, skill-building, and creating in-country capabilities. A student-satellite is also a hands-on project in arguably the ‘most attention-getting’ of engineering disciplines.”

A CubeSat (U-class spacecraft) is a type of miniaturized satellite for space research that is made up of multiples of 10×10×11.35 cm cubic units. CubeSats have a mass of no more than 1.33 kg per unit, and often use commercial off-the-shelf (COTS) components for their electronics and structure. CubeSats also act as a low-cost pathway to conduct research in science, exploration, technology development, education or other space-related operations.

CubeSats have seen explosive growth ever since the US National Aeronautical and Space Administration (NASA) began to get involved in their launch in 2003. More than 40 university-class satellites were launched in 2014 alone. CubeSats are also used for education and training, technology experiment and demonstration, scientific research, biological experiment, communications, earth remote sensing, military projects, space tethering and for navigation purposes. Among these areas, technology demonstration and earth imaging were the two areas in which the most number of CubeSats were launched during 2014 and 2015.

Advising the students at Masdar Institute to focus on industry-compliant practices for better results, Niederstrasser said: “CubeSats need to have only hardware designed for and tested in irradiated environments as they are expected to stay in a sustained low Earth orbit lasting months, probably even years. Radiation-hardened devices need to be used while building these small satellites. They must also comply with the CubeSat Design Specification and focus on products which many treat as standards in CubeSat electronics.”

“Cost-benefits play a key role in the launch of CubeSats,” Niederstrasser said and added that “there are always low cost piggy-back opportunities available for CubeSats on medium and heavy-lift launch vehicles”. However, he pointed out that dedicated launchers now under development could radically alter this trend.

The seminars are of relevance to Masdar Institute’s Space Technology and Systems concentration, which was launched in Fall 2016 train students in satellite design, development and operation  techniques of relevance to other sectors including communication, aerospace, and alternative energy. The concentration also supports the UAE in becoming the first Gulf country to successfully design and build a satellite entirely by students.

Students of the concentration are currently working towards designing, building, testing and flying a nanosatellite, guided by Orbital ATK engineers and mentorship from Al Yah Satellite Communications Company (Yahsat). Overall, the students plan to build up to four CubeSats named MI1, MI2, MI3 and MI4.

Masdar Institute CubeSats are expected to focus on education and training, technology experiment and demonstration, scientific research, communications, and earth remote sensing. They may be used for training across multiple engineering disciplines such as aerospace, electrical and mechanical, as well as for testing efficiency of future spacecraft components such as novel solar panels and batteries and microelectromechanical systems (MEMS) devices.