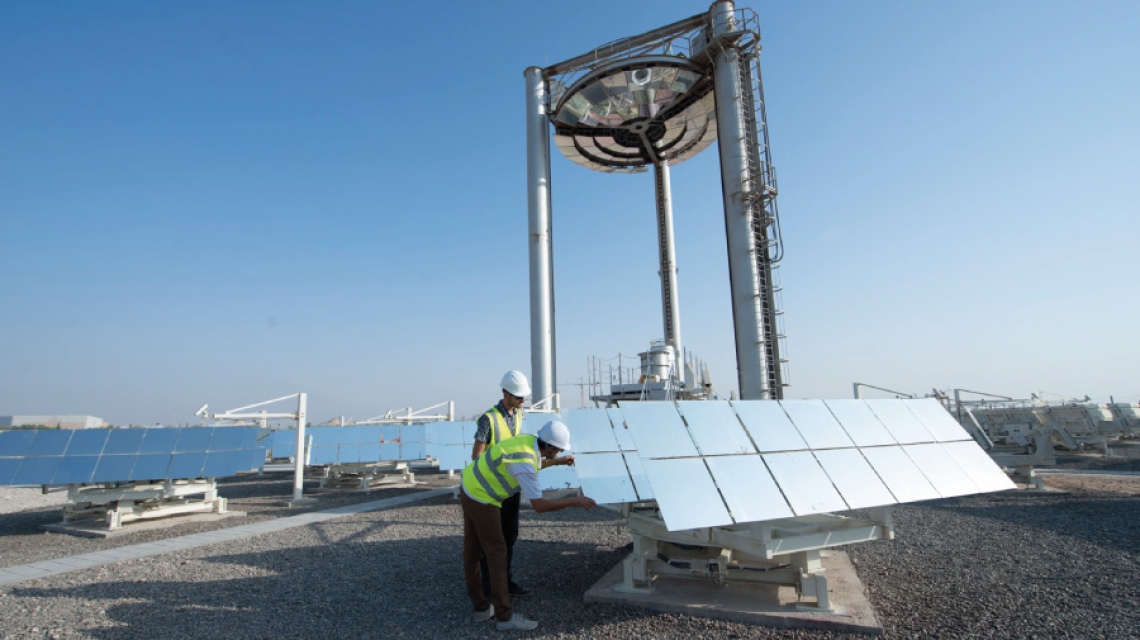 “The CSPonD Demo prototype is expected to directly absorb and store 600 KWh of thermal energy in a one-tank system on the ground, thus avoiding the need to pump molten salt to the top of the solar power tower, which is the method employed by traditional two-tank TES systems. It will produce constant power of 25 kW at all times of the day and night,” explained Dr. Nicolas Calvet, Chair of the MISP and Assistant Professor of Mechanical and Materials Engineering at Masdar Institute.

A traditional two-tank molten salt TES system – like the one developed by the Abu Dhabi Future Energy Company Masdar and Spain-based SENER for the 20 MW-Gemasolar CSP power tower plant in Spain – uses rotating mirrors to concentrate sunlight onto a solar receiver located at the top of a high tower.

Molten salt is stored in a “cold” tank on the ground at 290°C is pumped to the solar receiver through a temperature-controlled piping system. Once heated to 565°C, the molten salt is sent back down to a second hot tank, where it is stored as solar thermal energy.

The CSPonD Demo system avoids the use of pipes, pumps, and double tanks by bringing the sunlight down directly to a receiver on the ground, which it does through secondary mirrors placed at the top of the tower. It also avoids costly receiver tubes that undergo thermal fatigue and can bring the entire system down with the smallest of leaks.

To reproduce the two-tank system in one tank, a divider plate separates the hot molten salt on top from the cooler salt below. As the plate moves, the heated molten salt is fed into a heat exchanger where it can be used to produce steam for power generation with a turbine. Cooled molten salt returns to the bottom of the tank to repeat the cycle.

In order to capture more of the reflected light from the secondary mirror on top of the solar beam-down tower, the team built a concentrating cone that funnels the reflected sunlight evenly into the receiver where it is directly absorbed by the hot molten salt in the top of the tank.

“The six-sided cone we designed is fixed on top of the open receiver, reducing the receiver’s aperture so that less of the molten salt is exposed to the environment. The cone reduces thermal loss while also increasing the concentration of sunlight, enabling the salt to reach higher temperatures,” said Dr. Antoni Gil, a post-doctoral researcher from MIT working on the prototype.

The initial concept for the CSPonD Demo originated from research conducted at the Massachusetts Institute of Technology (MIT), which was published in 2011. Masdar Institute collaborated with MIT to scale-up the original design to create a pre-commercial scale prototype, which they expect to validate at the MISP.

Masdar Institute’s CSPonD activities aim to contribute to a more affordable and reliable form of solar energy capture. Current costs of electricity produced by CSP plants are quite expensive relative to  solar photovoltaics (PV). However, CSP systems coupled with sufficient TES can dispatch electricity at all times of the day and night and thus have an edge over PV as PV presently requires expensive batteries to store electricity produced during the day.

Developing innovative TES and CSP components that can reduce the energy costs for CSP plants is critical to decreasing the cost of electricity produced by CSP. Dr. Calvet and his team hope to drive down energy costs and increase efficiency of CSP plants through their novel one-tank TES system.

The CSPonD Demo is one of nine Masdar Institute-MIT active Flagship Research Projects, which are projects that bring together teams of faculty from both Masdar Institute and MIT to address key strategic research areas with the intent to build critical mass and make sizeable research impact for the UAE and the region.