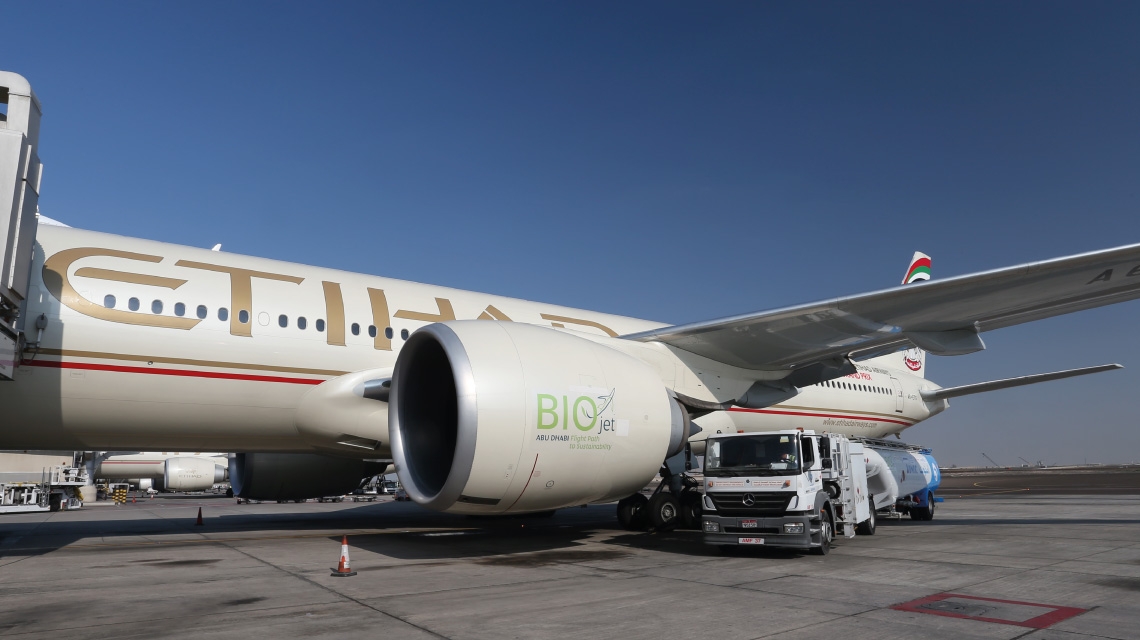 With last month’s flight of an Etihad Airways commercial aircraft powered by fuel produced from plant matter, the UAE has now firmly demonstrated the viability and importance of biofuel development and investment.

More than almost any other industry, aviation needs a renewable fuel replacement. While other sectors – energy supply, carmakers, and manufacturing – are being pushed towards renewable energy for more long-term environmental concerns, aviation is already suffering due to its dependence on fossil fuels.

When the price of oil rises – as it has massively in the past decade – so too does the price of jet fuel, which has more than tripled since 2000 and can now account for 40 per cent of an airline’s operating costs. And not only is it expensive, jet fuel contributes around 2 per cent of global manmade carbon emissions.

Developing an entirely new way of powering flight is not feasible in the medium term, requiring as it would require the replacement of billions of dollars of infrastructure and technology.

For the next 30-50 years, aviation will remain dependent on the basic liquid fuel combustion engines that have powered modern flight since its invention.

We can make the planes more efficient – each generation of aircraft uses around a fifth less fuel than the last – but to achieve true carbon neutrality, we will need to replace the current fossil fuels with a sustainable alternative.

That is why this flight, powered by a plant-based jet fuel refined here in the UAE, is such an important milestone.

The fuel used in that flight is what is known as a “drop-in biofuel” – a hydrocarbon fuel similar to diesel or jet fuel that in this case, was produced from biomass feedstock.

Drop-in fuels are meant to meet fuel quality specifications and be ready to be “dropped-in” to existing infrastructure, reducing the (costly) need to replace infrastructure.

For this fuel to be used in a commercial flight, it has to meet global quality specifications – in this case the D7566-13 standard specification for aviation turbine fuel containing synthesised hydrocarbons set by the American Society for Testing and Materials. Having met this standard, this renewable fuel should soon be ready for commercial production.

The next step now is to make sure all the hard work in developing, testing and certifying this sustainable jet fuel alternative is not wasted.

In order for biojet fuel to become an economic reality, the wider infrastructure and investment for the industry has to be developed.

To facilitate this, as the director of the Sustainable Bioenergy Research Consortium (SBRC) in Abu Dhabi, I am working with others to implement BIOjet Abu Dhabi: Flight Path to Sustainability, a project being led by Etihad Airways that aims to ensure its long term sustainability.

This project brings together the sectors crucial to biojet fuel development, including agriculture, government, water, energy, private sector, aviation, refining, environmentalists, financial/investors, and legal. The result, we hope, will be a national or regional strategy to bring biofuels to market in as short a time as possible.

With the launch of BIOjet Abu Dhabi, the research being undertaken at the Masdar Institute of Science and Technology through the SBRC, the investment provided by its industrial partners Etihad Airways, Boeing, Honeywell UOP and Safran, and the support of the UAE’s government and others, we hope to pave the way for aviation carbon-neutrality in the UAE.

Investing in the UAE’s own biofuel research and production capacity could also provide it lucrative export products, as annual revenue from biofuels production is expected to reach US$7.6billion by 2023, with $69bn invested in new production capacity worldwide over the next 10 years.

Dr Alejandro Ríos G is the director of the Sustainable Bioenergy Research Consortium and a professor of practice at the Masdar Institute.