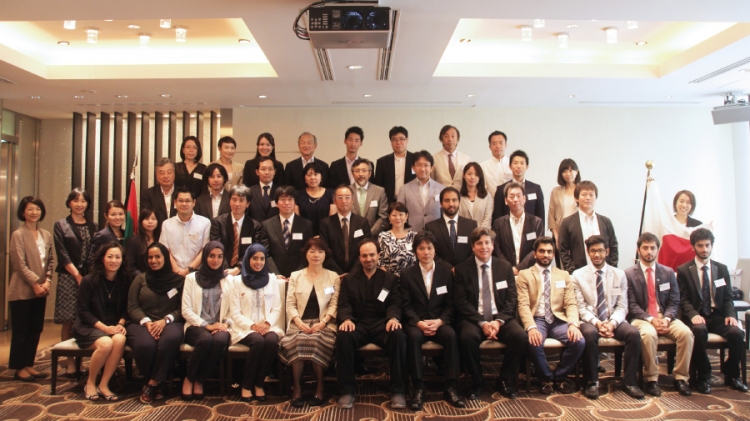 Abu Dhabi-UAE: 11 June, 2014 – His Excellency Saaed Ali Al-Nowais, UAE Ambassador in Japan, attended a welcome reception hosted for the eight UAE national students from Masdar Institute of Science and Technology who are currently in Japan for the third annual summer internship program sponsored by Ministry of Economy, Trade and Industry of Japan (METI) and organized by Japan International Cooperation Center (JICE).

The dinner event was attended by Hideyuki Urata, Director for Petroleum Policy, Agency for Natural Resources and Energy, METI, Ms. Masako Kishimoto, Vice-President, JICE, and officials from various Japanese corporations that are hosting the interns and embassy officials.

The internship that runs from 18 May to 7 July offers students key insights into the various sustainable technologies adopted by Japanese corporations.

His Excellency Al-Nowais commended the students from Masdar Institute and encouraged them to learn from the social and work cultures they are set to experience during the internship program.

Prior to the opening ceremony, the students also visited the Tokyo Metropolitan Government building, located very close to Shinjuku station, one of the major transport hubs in Tokyo. They enjoyed the city’s view from 45th floor observation deck. They also visited and Edo-Tokyo Museum, a place where visitors come to learn more about Tokyo’s history and culture. Founded on 28 March 1993, the building is modeled after an elevated-floor type warehouse and reaches up to 62.2-meter at its highest point.

Organized annually, the JICE internship program aims to offer Masdar Institute interns a closer understanding of the social and work culture in Japan, one of the world’s most technologically innovative countries.

The drive to cut energy costs in production of aluminum