Towards a Smarter, Safer, and More Sustainable Transportation System 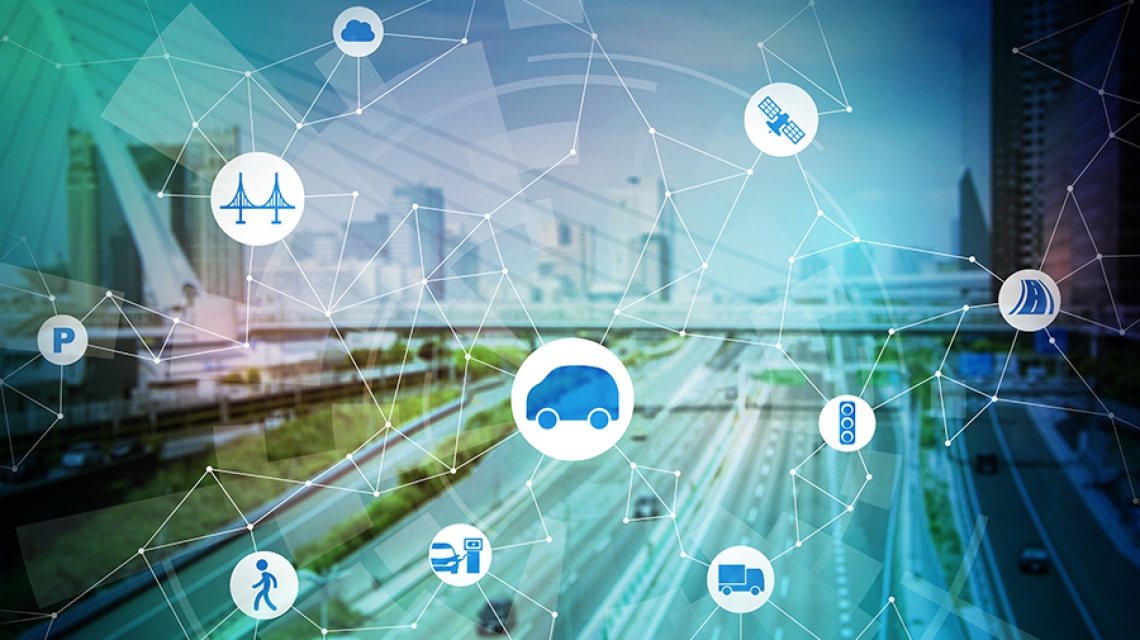 The road transportation systems that we use to shuttle people and goods are on the verge of becoming “smart.” At the heart of this smart transportation transformation is the convergence of internet-of-things (IoT) technologies and transportation systems, Dr. Steve Griffiths, Vice President for Research and Interim Associate Provost at Masdar Institute, highlighted while addressing the IoT in Transportation Conference in Abu Dhabi earlier this week.

IoT technologies – which utilize sensors, communication networks and data analytics to transform information from cars, phones, packages, traffic lights and other objects into actionable insights – are empowering drivers and transit operators with the information they need to make transportation more efficient, sustainable and safe.

That is why a growing number of research projects at Masdar Institute are focused on advancing smart transportation solutions, including a project that leverages IoT technologies to create a smart lighting system, a feasibility study on the potential uptake of electric vehicles in the UAE, and the development of sensors that can improve a plug-in hybrid vehicle’s energy efficiency.

To make the streetlights smart, Dr. Sanduleanu will develop radio frequency (RF) sensors that will be fixed to the streetlight poles, which will collect and transmit data about weather – such as fog, humidity, wind and dust conditions – and traffic – such as vehicle speed – that will help authorities in weather monitoring and in the planning and speed monitoring of traffic. The RF sensors will also enable adaptive dimming of street lighting, so that the light intensity of the streetlight will increase gradually as an object approaches and fade away quickly as the object moves away. This adaptive capability will improve energy efficiency while also promoting driver safety.

The proposed system will further improve the street lighting system’s energy-efficiency by replacing the high power consuming metal halide lamps typically used in streetlights with LED lamps, which require significantly less power to produce the same amount of brightness, resulting in an energy saving of 30% to 50%. LEDs also have a longer lifetime – between 10-15 years longer than halide lamps – which would result in a 50-70% saving in re-lamping and maintenance costs. Another feature of the smart lighting system that will reduce operating costs is its automatic lamp failure diagnostic system, which will detect any total or partial lamp failures and notify authorities right away for replacement.

The collaborative project, which includes support from du – Emirates Telecommunications Company,  the American University of Ras Al Khaimah and Khalifa University, has a two year timeframe once initiated. The research conducted through the project will position the UAE as a global leader in the development of IoT systems, which is estimated to be worth as much as US$6.2 trillion by 2025, and smart transportation systems, which is set to exceed US$138 billion by 2020.

ELECTRIC VEHICLES IN THE UAE

To facilitate the effective adoption of electric vehicles in the UAE, Dr. Sgouris Sgouridis, Associate Professor of Engineering Systems Management at Masdar Institute, has been investigating the benefits and obstacles to electric vehicle adoption in the UAE. His research examines both the economic and technological potential for adoption in Abu Dhabi, with research implications that can be extrapolated across the Gulf.

“We have conducted the first survey in the region to investigate the public willingness to adopt electric vehicles and conducted a techno-economic assessment of how the use of electric vehicles could impact the state- and private-use financing as they interact in the context of fuel subsidies. This interaction suggests that the state is a primary beneficiary when domestic fuel consumption is reduced and therefore should be able to support their adoption through cross-subsidies rather than additional fiscal cost,” he explained.

His research findings asserted that effective electric vehicle adoption in the UAE and other Gulf urban centers would depend on the perception of opportunity costs for fossil fuel use, external cost of pollution and the desire to boost the public profile of these societies.

Dr. Sgouridis advised that if the government decides to subsidize electric vehicles, then it would be better to initially support vehicles that see high utilization, such as those that drive more kilometers on an average day like taxis and commercial fleet vehicles. This method would promote adoption of electric vehicles while ensuring the UAE government is able to derive the greatest benefit from this sustainable transport shift.

Another Masdar Institute project that focuses directly on the convergence between smart transportation and energy innovation is being led by Assistant Professor of Computing and Information Science Dr. Sid Chi-Kin Chau and PhD student Chien-Ming Tseng to improve the efficient use of plug-in hybrid electric vehicles and roadways in general.

Dr. Chau and Tseng have developed an app that will promote the more efficient use of plug-in hybrid electric vehicles and also enhance driver confidence by helping map routes to charging stations and providing ‘distance to empty’ information.

“Plug-in hybrid electric vehicles have a large rechargeable battery and can be plugged-in and recharged from an outlet, allowing them to drive long distances using just electricity. However, many plug-in hybrids adopt a kind of straightforward strategy in a way that they likely run on the electrical battery until reaches its minimal state of charge, and then they switch to the fossil fuel tank. But in some types of driving situations, the electric energy is more efficient, while in other situations, the petrol energy is more efficient. So to make plug-in hybrids more efficient energy consumers overall, we are developing an app that is integrated with a cloud transport system to recommend the ideal driving mode given the driving environment,” Tseng explained. The team tested their research on a Chevrolet Volt.

The problem is that most current plug-in hybrids’ energy systems mainly focus on the car systems, and not as much on human factors, such as driving behavior or traffic conditions. This research aims to optimize a plug-in hybrid vehicle’s energy consumption considering these human factors.

“We estimate that our app could potentially save approximately 20% of fuel consumption if utilized correctly,” Tseng revealed.

The app the team developed can also be used to predict ‘point to empty’ for electric vehicles, which is very useful information as charging stations are not yet plentiful and users have to be careful not to run out of battery charge before reaching the next station. It can also help car users chart the most efficient route for their journeys to reduce idling and city travel, which tends to waste more energy.

The app, which is expected to be released on the Google Play and Apple Store by next year, exemplifies the leveraging of capabilities and expertise in data analytics and cloud computing to develop new technologies that support the UAE’s smart transportation transformation.

Transportation is one of the UAE’s targeted National Innovation Strategy sectors for a reason – it is a system on which we all rely to get to our places of work, schools and homes, yet it can pose severe health risks and reduce overall productivity, and is a significant contributor to global greenhouse gas emissions. To help make the UAE’s transportation system one of the most innovative in the world, researchers at Masdar Institute are leveraging their expertise in IoT technologies and energy system innovations to support the research and development of the technologies needed to transform the current transportation system into one that is smarter, greener and safer.