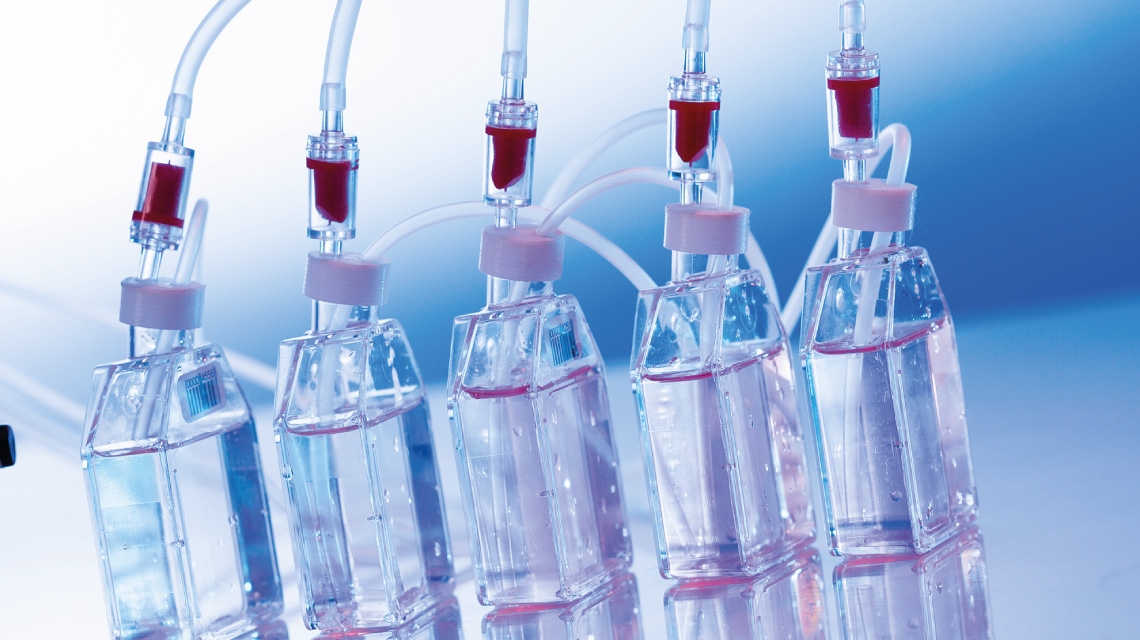 Nature is an amazing designer. It has, over many millennia, evolved systems that are more efficient, productive and capable than what even the cutting edge of modern technology has been able to mimic.  A good example of the result of this evolution is a virus. In its most basic form, a virus is simply a bit of genetic material (made up of either DNA or RNA) contained within a protective protein coat.  It exists to hijack an infected cell in order to make many copies of its genetic material (also called a genome), which is then stuffed into protective protein coats creating new virus particles.  Viruses accomplish this hijacking of a cell mainly by making proteins according to a template contained in their genome.

Their functional simplicity makes viruses appealing to scientists.  In a laboratory technique known as phage display, when a fragment of DNA is inserted into a virus that specifically targets bacteria – a type of virus called a bacteriophage, or phage for short – a new protein sequence representing that inserted DNA will appear on the virus’s surface.  The result is a virus that can express an artificially designed protein sequence on its surface. Phage display has gained popularity as a tool to identify novel interactions, either between proteins and other proteins, or between proteins and nucleic acids (the building blocks of DNA).  Being able to spot these interactions is useful in everything from pharmaceuticals to cutting edge bio-electronic hybrid technologies.

What Masdar Institute is now looking to do is to apply this technology to sustainability-focused nanoengineering.  We are trying to identify bacteriophages that are suited for the manufacture of biomaterials that can be used to create organized nano-structures, bio-filters and biosensors.  By inserting random DNA sequences into a phage known as M13, we will create a “library” of phages that will display a large number of novel and random proteins on their surface.  We hope this library will contain phages that can bind to particular organic and inorganic nanoparticles. We will then make many different types of phages, giving us something akin to a “phage Lego set”, a virus tool box. From there, we will mix and match various phages in the toolbox into combinations that between them can assemble desirable biomaterials.

To begin with, we will use this phage display technique to look for short proteins (also known as peptides) that can be used to make membranes for use in desalination and water treatment – an essential process in a country as dry as the UAE.  Membrane-based desalination – as opposed to the traditional vacuum distillation-based approach – is growing in popularity, but faces some challenges.  A particular difficulty known as biofouling arises due to the growth of unwanted microorganisms on the membranes.

When biofouling becomes too severe, the membrane must either be cleaned or replaced, increasing operational costs.  Our objective is to make a membrane that resists this fouling. To do that, we will screen a pool of viruses for peptides that stop the microbes growing and sticking to the membranes. Once we have found these peptides, we hope that other researchers at the Masdar Institute can help us make new membranes that have the peptides embedded in them.  These membranes will repel the microorganisms or inhibit their growth – meaning that the membranes last longer and end up costing less.  With this area of research, we hope to contribute to the UAE’s development of sustainable solutions that will not only improve the health of the environment, but also provide it with innovative intellectual property that will be in high demand around the world.


Dr. Ahmed F. Yousef is an assistant professor of chemical and environmental engineering at the Masdar Institute of Science and Technology.