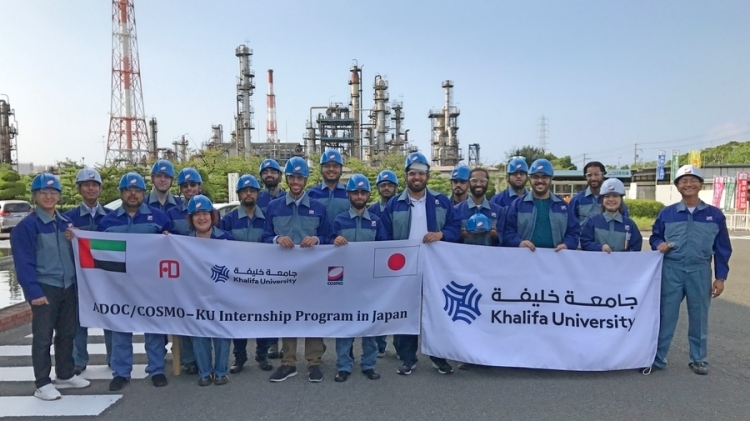 A team of nine Khalifa University students gained insight into Japan’s culture of progressive improvement – known as ‘kaizen’ in Japanese – when they visited the Asian economic powerhouse as part of the ADCO-Cosmo-JCCP Internship Program during the summer.

For intern Taryam Al Katheeri, the visit to Waseda University was moving. He said: “It was inspiring to hear them talk about their research and how they aspire to be petroleum engineers in order to find more efficient ways to produce oil in the Middle East region, which then impacts Japan in an indirect way.”

Khalifa University students participated in a collaborative seminar at Wesada University, where they discussed themes related to oil and gas.

Intern Yaser Yousuf Mohammad Saleh felt language was not a barrier for interaction. He said: “The ability to interact and with work other students helped us realize that it is possible to work with people of different cultures, and the language was not a huge barrier because we were working to achieve a common goal.”

Visiting the Cosmo Sakai refinery in Osaka, which produces naphtha, jet fuel, and diesel fuel, Saleh remarked that it was interesting to see how Japan produces energy by processing gas. He added, “We were able to see the facilities, the control room and even the plant up close.”

For Al Katheeri, the visit to the Toyota manufacturing facility was an eye-opener. He said, “It was astonishing to see how humans and machines work in harmony with such high precision and accuracy within a certain time frame.”

The massive 1.8-million square meter JFE Steel Chita Works offered an amazing experience, according to Saleh. The facility specializes in the production of steel pipes and tubes and boasts the largest selection of steel pipes produced at any single plant in the world. It continues to develop innovative, advanced technologies for pipe making.

The students later visited Hamaoka Nuclear Power Plant, located in the city of Omaezaki in Shizuoka Prefecture on Japan’s east coast, 200km south-west of Tokyo, where they viewed the safety measures and strategies the company has implemented after the tsunami and earthquake.

Regarding their visit to the world-ranked University of Tokyo, Al Katheeri said it was an honor. He added: “The visit enabled us to exchange our research topics with one of the prestigious and top ranking academic institutions in Japan. It was really interesting to see how they approach their research problems and build up their hypothesis.”

The internship program aims to give the UAE’s future engineers the opportunity to visit leading Japanese companies in oil, energy and manufacturing sectors to teach them about their operations, as well as visit renowned Japanese universities. The program also aims to teach students about Japanese culture and history through visits importance sites in Japan. This is the first time students visit was organized under the merged Khalifa University banner, though the Abu Dhabi Oil Co Ltd (Japan) – ADOC- Cosmo-JCCP program has been in operation for the past four years.