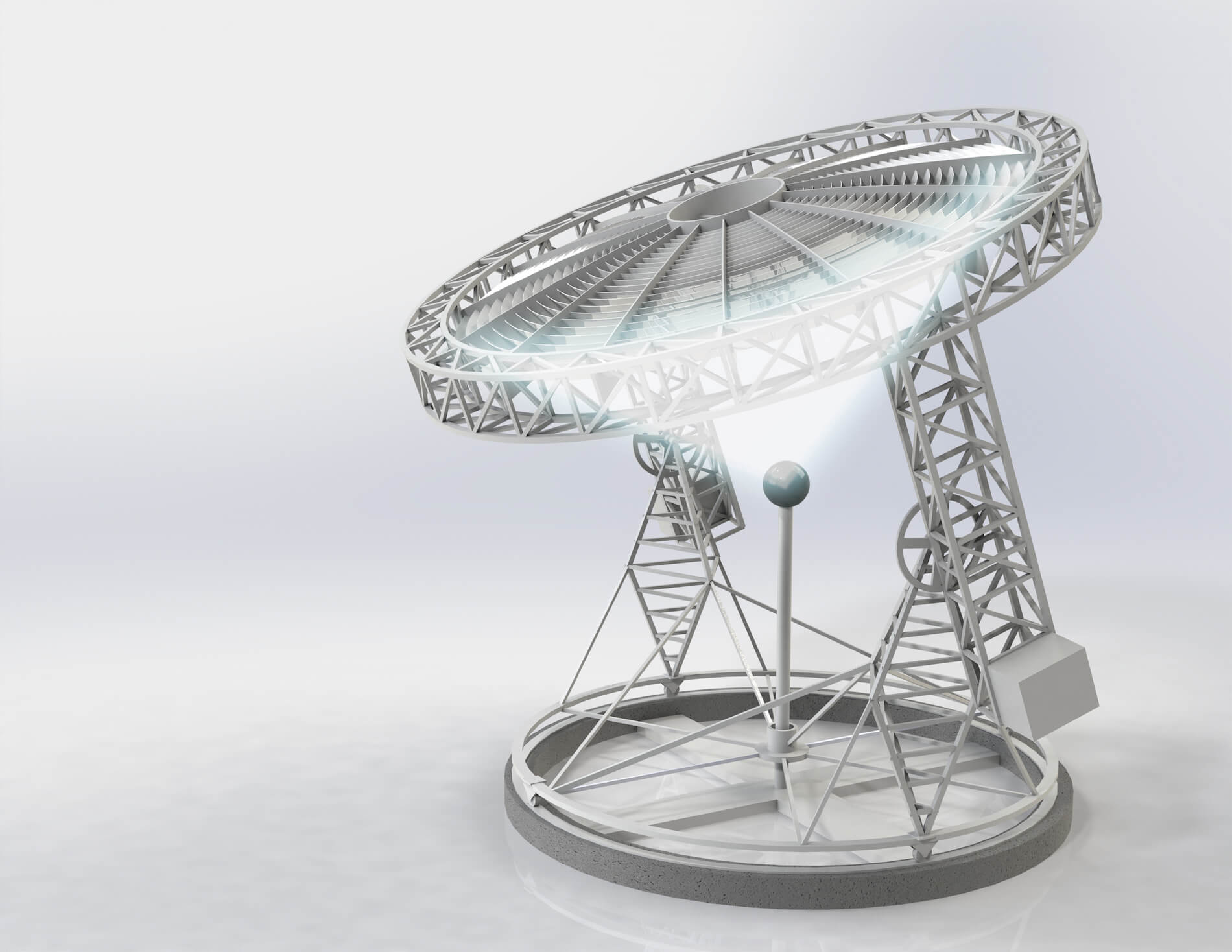 Our “back of the envelop” communication with researchers is that the US $3 per gallon of gasoline equivalent (GGE) per kilogram of hydrogen could be obtainable,” said Al Maaitah, whose start-up VC invests in the beam-down solar concentrator to be tested in the UAE.

Of the four types of Concentrated Solar Power (CSP) technologies, dish has barely been commercialized for power, but its promise is that, with its highly concentrated focus, it can cost-effectively reach the extremely high temperatures needed in solar fuels production; above 800°C. But the solar receiver in a dish must be set in front of its surrounding reflectors, and so it moves in tandem with them as they track the sun, creating challenges.

“Dish has a very good optical efficiency, but its main issue has been that the focal point is moving as it tracks, so to connect the components of the system adjacent to the receiver, you need flexible hoses that can withstand high temperatures. But that’s difficult and very costly, and you can’t connect storage, so dish is almost dead commercially,” noted Mechanical Engineering Professor Ayman Al Maaitah at the American University of Madaba and Mu’tah University.

By turning the concentrator upside down, Al Maaitah has devised the solution to the moving receiver problem, leveraging his experience in the optical aspect of CSP. “My invention basically is that I can focus from up to down at a very high efficiency on a fixed focal area while tracking the sun. We can reach a very high temperature at this focal point,” he explained. “So with this change we can theoretically generate temperatures of around 1,000°C.”

Now CEO of Wahaj Solar, Al Maaitah is a 20-year veteran of CSP research in parabolic trough and Fresnel CSP concentration. (How CSP works: Tower, Trough, Fresnel or Dish)  He has now patented the design of a metallic-reflector-based Fresnel lens beam-down concentrator and formed Wahaj Investment, LLC in partnership with a former colleague, to commercialize it.

They are now in the process of constructing a pre-commercial test at the Masdar Institute Solar Platform at Khalifa University of Science and Technology in the UAE. The Wahaj Solar team first built a small lab-bench model of 40 centimeters in diameter, attached to a small sterling engine, and even this size managed to melt lead, which has a melting point of 327°C. (Such lab-bench temperatures are not unusual in dish. Even a 2 meter dish achieves 950°C in this South African research into solar Manganese ore processing.)

It is not an easy thing to concentrate reflected sunlight down, but the payoff is it puts the most highly concentrated flux in a usable place at ground level where it can be used to supply heat at the high temperatures needed to melt metals or catalyze solar fuels.

Focusing down enables melting in a container

The international network of researchers designing reactors for solar fuels or furnaces for metal smelting have assumed that their receiver-reactor designs might be placed atop the already commercial CSP towers, which can also achieve the temperatures needed. However, a CSP tower has a large solar field which would comprise a relatively high percentage of the cost of simply providing the heat needed in a solar fuels reactor or for the other industrial processes needing high levels of heat.

There are also practical benefits to focusing the sunlight down onto a ground-based reactor rather than up onto one 200 feet up, explained Khalifa University of Science and Technology Professor Nicolas Calvet.

“When the flux comes up from the side then you usually need to have a quartz window on the side, and then melt inside the tank in the window. It is much more convenient to melt something that is in a container with the heat coming from the top, so when it melts you have the container to hold the liquid,” noted Calvet, who heads up the Masdar Institute Solar Platform where beam down tower is already researched, making it a natural contender for this real-world trial.

Calvet is very happy that Masdar Institute’s five-year-old research lab has already attracted industry interest from “a young startup like Wahaj Solar” and he attributes it to the growing CSP market in the MENA region and in the UAE, in particular. “To make solar fuels in the UAE  makes perfect sense, because you move from an oil and gas country to a solar fuel country,” he said. 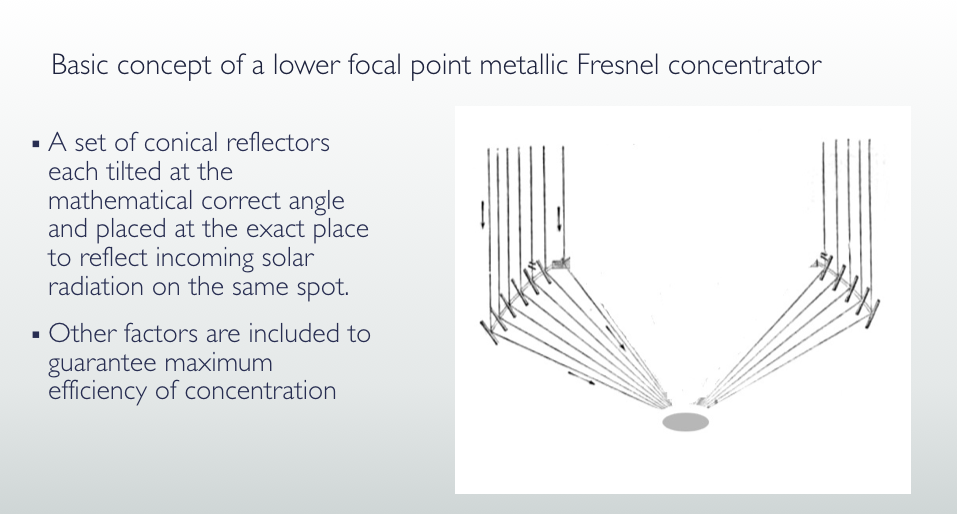 How the Wahaj Solar beam down concentrator works

To reflect the sunlight down, multiple fins fan out between the long spokes of the circle. Each of these is an aluminum reflector that has been mathematically angled in such a way as to bounce the sunlight between adjacent fins so it converges at the focal point underneath onto the receiver.

Wheels rotate the concentrator to track the sun as it crosses the sky each day and a second rotation tracks the sun’s seasonal change in elevation. Concrete counterweights balance the weight as the dome rotates, and “just a few watts” are used of solar PV to power the tracking mechanics. Not illustrated here (because the demo is to test only the optics between the reflectors and the receiver) but the storage tank would be readily integrated underneath the receiver.

Calvet’s initial abstract, Design and Demonstration of a 10-meter Metallic Reflectors Based Fresnel Lens, with Lower Focal Point Fixed to the Ground that will be presented at the SolarPACES Conference 2019 in South Koreanotes that the solar flux at the surface of a flat receiver, 25 cm in diameter can reach more than 11,000 kW per sq. m at the center, with a total flux of 66 kW. 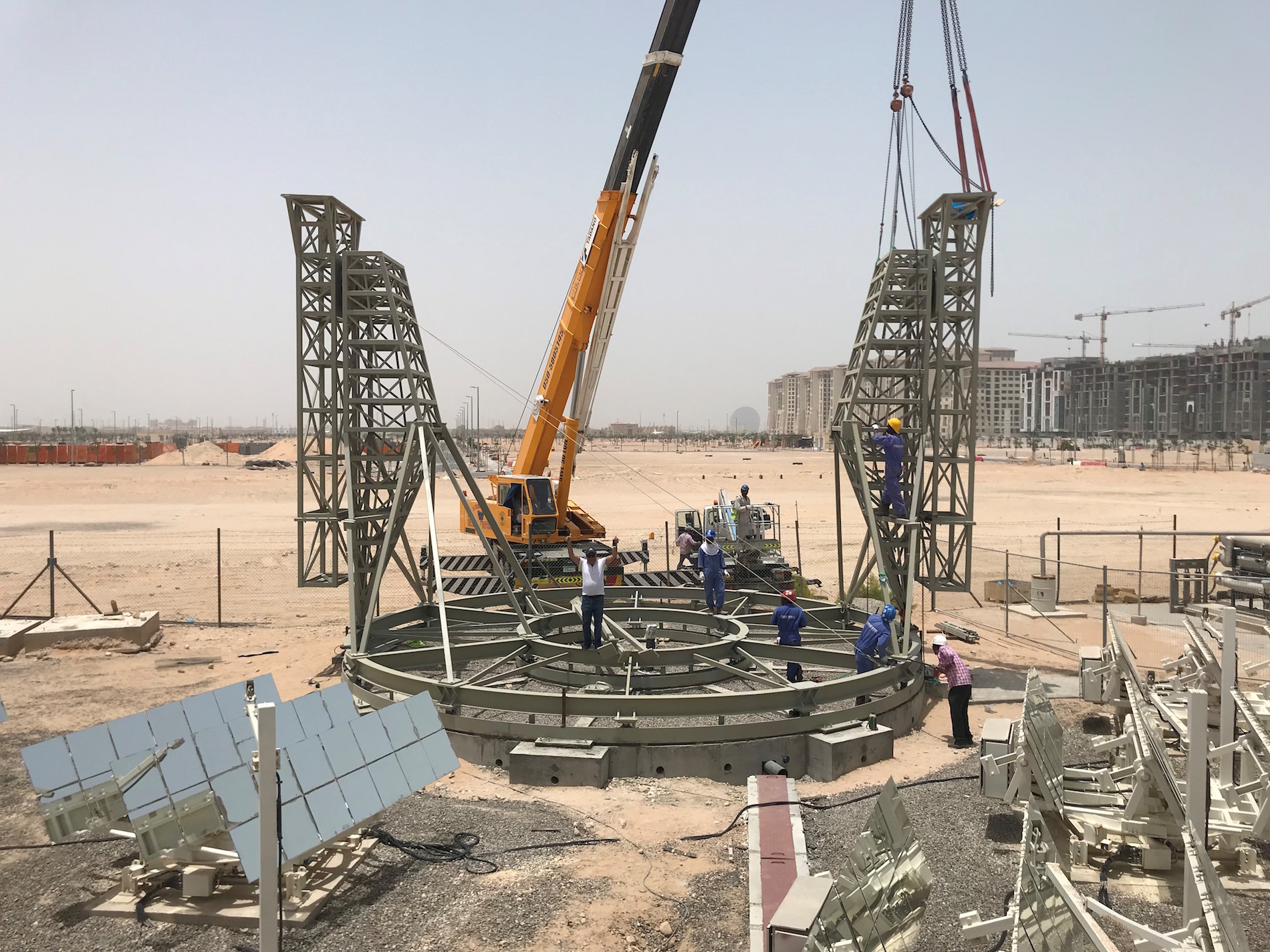 At this size, the power capacity would be about 50 kWth. Calvet explained the relationship between capacity and the concentration, comparing it to the existing high beam down tower research demo.  “Our beam down is 100 kW thermal, and only 100 suns. And this one at 50 kW will be half the power and 1,000 suns. So there’s 10 times more concentration. To reach the higher temperatures, you always have a higher surface of mirror relative to the receiver. The ratio between the total surface of your mirrors and the surface of your solar receiver is its concentration ratio.”

Al Maaitah envisions building larger units at 25 m or more to generate capacity of several megawatts for small scale off-grid power generation for underserved MENA regions, and proposes a larger receiver for the larger surface of mirror concentration to maintain the desired concentration ratio. He sees the advantage here as offering a self-contained system that is modular, so it can add units to generate more power as needs grow.

“For the same size of focal area, the concentration ration of a 25m in diameter concentrator would be 6.5 times that of the current 10m concentrator resulting in much higher temperatures,” he said. “But since we do not need ultra-high temperatures for current applications, we would instead increase the area of the receiver to reach the needed temperatures, while allowing for larger heat transfer area at the receiver.”

Al Maaitah, who’s firm is self-funded as its own venture capital investment, is most excited by the commercial possibilities of solar industrial heat applications, such as for smelting metal and for making solar fuels such as hydrogen.  “Solar fuel production; this is the Holy Grail for us. Because the remarkable thing about dish is you can get the 1,000°C temperatures you need for producing solar fuels like hydrogen.” he said.

“When you can provide 700 or 800°C temperatures, existing thermochemical solar fuels technology is fantastic: It can even split brackish water or wastewater into hydrogen and oxygen! So the water does not need to be distilled water as it does with solar PV or wind to do hydrogen electrolysis, where the water must be pH balanced. Our “back of the envelop” communication with researchers is that the US $3 per gallon of gasoline equivalent (GGE) per kilogram of hydrogen could be obtainable.”

In addition to solar fuels like hydrogen, another commercial need Al Maaitah sees is to replace fossil fuels for high temperature metal smelting. He expects that his technology can be cheaper than heliostat and tower CSP for smelting metals like alumina.

Meanwhile, once the construction is complete this month, the test will begin. Calvet will publish the research results of the test once it is complete. “My point of view as a faculty member is more from the academic side. So I’m more focused on the science and the proof of concept than the commercial possibilities,” he said. “We need to make sure that the dome, which is the most important part, will not bend or become deformed and that it will have a good concentration where we want it. So I’m just the guy who says if it works or not.” But he added: “As for commercial solar fuels; in ten years, why not?”

Getting the oil out of water