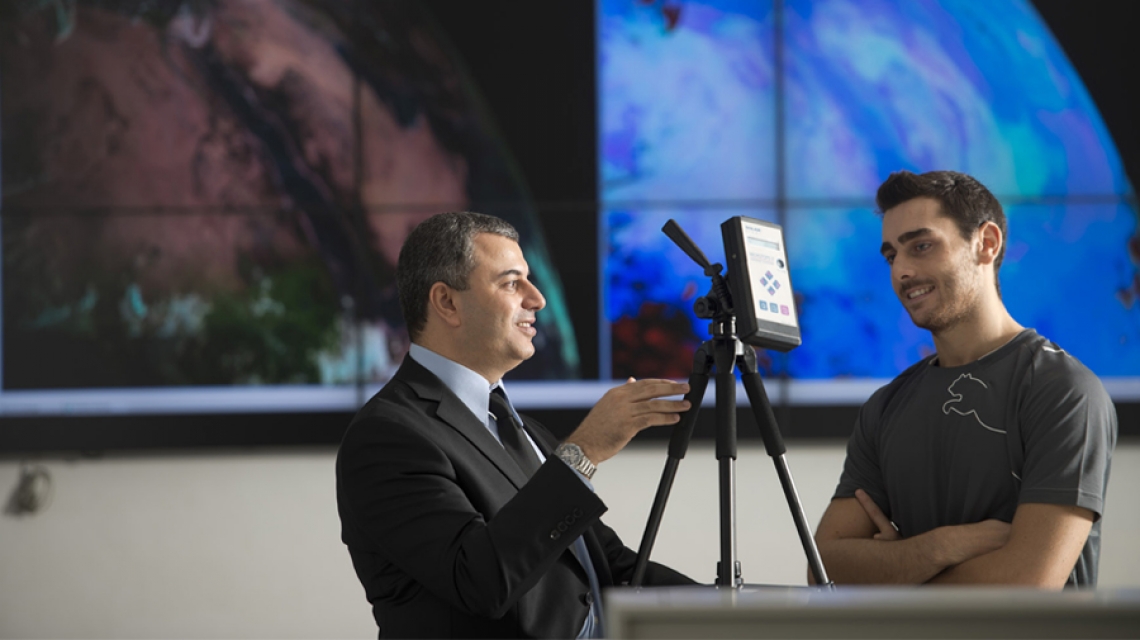 The Masdar Institute’s longest running sponsored research center – the Research Center for Renewable Energy Mapping and Assessment (ReCREMA) – is deepening its engagement with key industrial and government partners to unlock the renewable energy potential of the UAE and wider region and apply the latest innovative technologies to monitoring the health of its precious natural resources, through a number of initiatives that were launched at Abu Dhabi Sustainability Week (ADSW) 2017.

ReCREMA’s strong remote sensing, mapping and modeling expertise have attracted new and enriched collaborative agreements to expand regional and global knowledge of how to best utilize available renewable energy resources, as well as how to preserve important environmental resources, which attendees of  ADSW’s central event, the World Future Energy Summit (WFES) 2017, had the chance to learn more about. Over 30,000 people from around the world attended the summit, which is held yearly to discuss advancing the use of renewable energy, energy efficiency and clean technology.

Two new tools were demonstrated by ReCREMA at the summit, including the UAE Solar Performance Simulator and the Bioenergy Simulator, which was established jointly with the International Renewable Energy Agency (IRENA). The research center also revealed findings from its UAE Solar PV Zoning Analysis Project, which was established last year with support from the UAE Ministry of Energy, and the launch of a collaborative undertaking to develop local applications for an innovative hybrid drone-satellite airship.

Dr. Hosni Ghedira, Director of ReCREMA and Professor of Practice, Masdar Institute, said: “We are proud to be seeing a number of our collaborative relationships lead to mature results and further explorations relating to important issues like optimization of electricity generation from concentrating solar power (CSP), solar photovoltaic (PV) and biomass technologies, and enhanced regional monitoring of key environmental resources.”

Last year ReCREMA launched its UAE Solar Technology Simulator – a web-based geographic information systems (GIS) tool for modelling and simulating the performance of utility-scale solar PV power plants in the UAE. This year the simulator has been expanded to include capabilities for modeling and simulating utility-scale CSP plants in the UAE, as CSP is considered a promising source of solar power for large scale power generation that uses solar thermal energy to drive steam turbines for electricity production.

“Currently, there is no open-access tool available where the performance of a user-defined CSP power station can be mapped,” explained Dr. Mercedes Ibarra, CSP specialist at Masdar Institute.

This first-of-its kind tool will be useful for CSP plant developers and investors to simulate the performance and electricity energy generation potential of future plants with different CSP technologies and thermal energy storage (TES) sizes, allowing them to make better-informed choices regarding both the technology and location for future solar energy plants. Being specifically designed for hot desert conditions, this simulator is expected to increase the knowledge about the UAE’s CSP potential as well as investor confidence, thereby attracting more investors to its solar energy market.

Such knowledge and investor confidence will provide a critical boost to the UAE’s renewable energy efforts and position the country to achieve its targeted goal of generating 24% of its power production capacity from renewables by 2021.

In line with the leading role played by the UAE to foster renewable energy deployment globally, ReCREMA presented another simulator it has developed in collaboration with IRENA. Its Bioenergy SImulator gives users the ability to estimate the electricity generation potential for different types of biomass grown anywhere in the world.

“The launch of the Bioenergy Simulation tool is one more remarkable feat from ReCREMA. The bioenergy simulator demonstrates another key aspect of our contribution to advancing clean energy projects through facilitating access to data,” Dr. Ghedira remarked.

The simulator allows users to select a bioenergy source, which can include crops, agricultural residues, livestock waste or forest plants; a relevant energy conversion process, such as any technology for biofuel combustion; and bioenergy end uses, which include either local transport, heating, or electricity consumption. With all parameters selected, the tool will determine the amount of bioenergy possible in a given location.

“We foresee the launch and inclusion of the Bioenergy Simulator in IRENA’s Global Atlas will highlight our role in knowledge creation in sustainability and clean energy. The simulator is now open for crowdsourcing validation. All users are invited to participate in the validation of the simulator. The feedback will be analyzed and errors assessed in order to improve the results,” Dr. Ghedira shared.

This interactive tool will be hosted and operated at ReCREMA.

The UAE Solar PV Zoning Analysis Project goes one step beyond the UAE Solar Technology Simulator to provide an economic assessment of a potential PV power plant in any location in the UAE.

“In this project, we integrated data from ReCREMA’s solar resource maps, PV plant performance modelling tools, and spatial data layers of various cost factors, to determine the sites that will offer PV electricity at the lowest possible levelized cost, which is the cost of generating electricity over the full lifecycle of the PV plant,” explained Masdar Institute Research Engineer Arttu Tuomiranta.

This site zoning strategy will enable the government to optimize the location of future utility-scale PV power generation plants in the country, which will in turn make generating a higher proportion of the country’s electrical energy from the sun cheaper and easier.

“In the UAE, the government allocates land for power generation projects and commits to purchase the produced power at the agreed price. In order to minimize the price, it is therefore in the government’s interest to allot the projects to economically optimal areas for PV power generation. However, until now, the existing geospatial information about the PV potential in the UAE has been insufficient for proposing a high-resolution plant zoning strategy for the country,” Tuomiranta added.

The data sets developed through this project can be used to select the sites that have the potential to supply solar electricity at the lowest cost.

StratobusTM is a type of high-altitude pseudo satellite (HAPS) that will be positioned at an altitude of about 20 kilometers over its ground station, in the lower layer of the stratosphere. Operating as an autonomous satellite, the stratospheric airship offers an advanced solution for permanent regional coverage of an area measuring 500 kilometers with payloads of up to 250 kilograms. When launched, it will have a number of potential applications, including border and maritime surveillance and real-time environmental monitoring.

As part of this collaboration, ReCREMA will develop a complete technical feasibility study and recommendations for optimum payload technologies and specifications. ReCREMA will assess the potential of StratobusTM to perform coastal water monitoring and atmospheric pollutant monitoring in the UAE. Monitoring the UAE’s coastal waters and land is crucial, as its waters are susceptible to oil spills and harmful algae blooms – both which can destroy marine life and result in millions of dollars in economic losses – and its land is susceptible to desertification – the degradation of land caused by the erosion of topsoil, which negatively impacts agriculture and crop growth.

By exploring cutting-edge monitoring technologies, like the StratobusTM, to monitor the health of key environmental resources, ReCREMA will continue to play a critical role in driving innovation in earth observation technologies to bring sustainable benefits locally, regionally and globally.

The innovative work done through ReCREMA has not gone unnoticed. ReCREMA has established itself as a leading regional research center in the field of earth observation, renewable energy mapping, solar technology simulation, satellite image processing, and atmospheric modeling. The center is now recognized as a regional research hub for adaptation of earth observation technologies for environmental monitoring in desert and arid environments. In fact, ReCREMA was selected by NASA in June 2011 as one of seven global pre-launch test sites for a new Earth observation satellite (SMAP) that was launched by NASA in January 2015.

And now, in 2017, ReCREMA has set the stage for another progressive year through a number of strategic collaborations and research and development activities aimed at producing valuable tools and outcomes that will play a key role in advancing the UAE Vision 2021 National Agenda, which focuses on improving the quality of air, preserving water resources, increasing the contribution of clean energy and implementing green growth plans.