Renewable Energy to Account for 8% of Total Consumption by 2035, BP Reveals at Masdar Institute 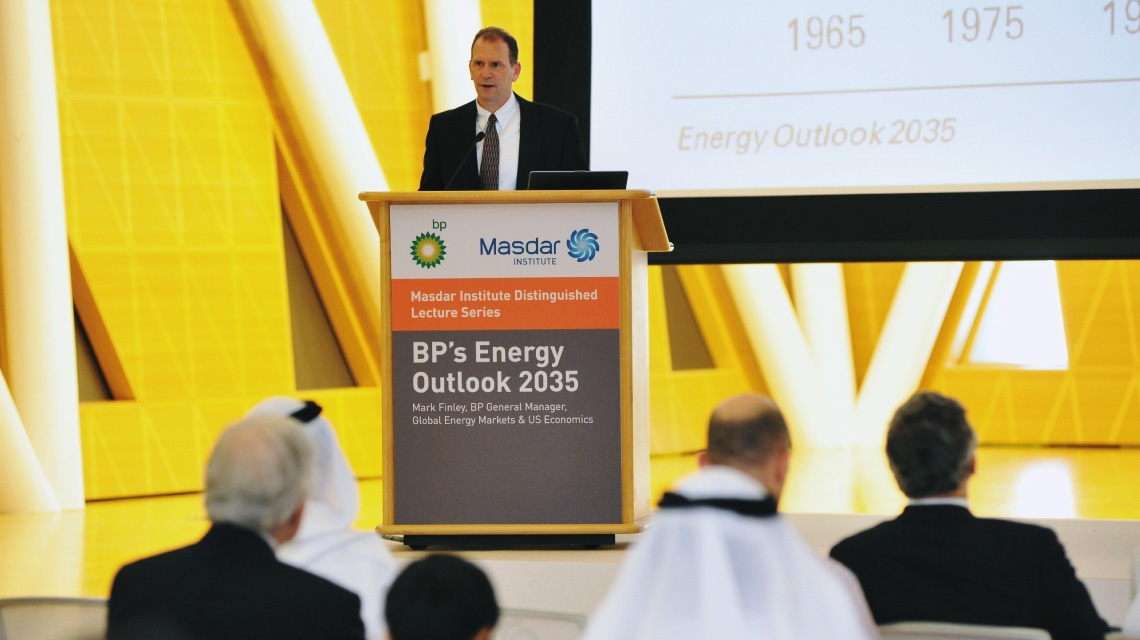 Finley was speaking at the Masdar Institute campus in Abu Dhabi as part of the Distinguished Lecture series hosted by the independent, research-driven graduate-level university focused on advanced energy and sustainable technologies.

Finley said, “The Outlook’s projection of rising CO2 emissions will require additional significant steps by policy makers beyond the steps already assumed, and the Outlook provides comparative information for possible options and their relative impacts on emissions. However, as no one option is likely to be sufficient on its own, multiple options will need to be pursued. This underlines the importance of policymaking taking steps that lead to a meaningful global price for carbon which would provide incentives for everyone to play their role in meeting the world’s increasing energy needs in a sustainable manner.”

The BP Energy Outlook 2035 highlights the relevance and importance of research-based institutions such as Masdar Institute that operate in the sustainability arena. The forecast serves as a strong motivating factor for the students and faculty to consistently pursue with their efforts in bringing sustainable solutions to help tackle energy and climate-related challenges.

In his talk the BP official also highlighted the BP ‘Energy Outlook 2035’ finding that among non-fossil fuels, renewables are expectedly to rapidly gain shares in the coming years, from around 3% today to 8% by 2035, overtaking nuclear in the early 2020s and hydro in the early 2030s. The BP Outlook assesses the implications for global energy demand and supply of expected changes in global economic growth, population growth, technological change, and policy support for renewable energies, energy efficiency, and other sources of energy supply.

Finley said that the growth of renewable fuels in areas outside the Organization for Economic Co-operation and Development (non-OECD) region will be roughly the same in volume as in the OECD. But there will also be significant increases in non-OECD nuclear and hydro-power. Renewables will eventually account for 16% of the growth in power generation in the non-OECD areas, it adds.

He noted that among the exporting regions, the report states that the Middle East will remain the largest net energy exporter, but its share will fall from 46% in 2013 to 36% in 2035. Russia will remain the world’s largest energy exporting country, while Asia’s import dependency will rise from 23% in 2013 to 27%. Oil will account for 60% of that rise, with imports accounting for over 80% of Asian oil consumption by 2035. Asia’s oil imports in 2035 will be almost as large as OPEC’s current entire oil production, the report points out.

Citing the BP Energy Outlook 2035, Finley pointed out that nuclear energy at the rate of 1.8% per annum and hydro-electric power at 1.7% per annum will grow faster than the total energy sector. However, among fossil fuels, natural gas will grow the fastest at 1.9% per annum with oil at 0.8%, marginally ahead of coal, also 0.8%.

According to the report, over 70% of carbon emissions will be produced from non-OECD countries, although per capita emissions in the non-OECD will still be less than half the OECD level. Total carbon emissions however will increase by 25%, the report adds.
It also predicted that by 2035, all the fossil fuel shares will be clustered around 26-28% with no single dominant fuel – for the first time since the Industrial Revolution. Fossil fuels in aggregate will lose share but will remain the dominant form of energy in 2035 with a share of 81%, down from 86% in 2013.

On the emissions front, the report says the profile for emissions will be well above that recommended by the scientific community. Total carbon emissions from energy consumption are expected to increase by 25% between 2013 and 2035 at the rate of 1% per annum, with the rate of growth declining from 2.5% over the past decade to 0.7% in the final decade of the Outlook, says the report.

The report also predicts that the US, Russia and Saudi Arabia will supply over a third of global liquids fuel (crude oil) output by the year 2035, while the Organization of the Petroleum Exporting Countries’ (OPEC) share of the global liquids market by 2035 will be around 40% – the same as over the past 20 years.

The lecture, which was attended by faculty, students, staff and other guests, covered global market share of fuels, outlook for US tight oil and shale gas supply, the significance of US energy renaissance for global markets, the likely changes for China and the implications for CO2 emissions. Earlier, Finley was received by Masdar Institute officials, who took him around the campus on a tour of the research projects and the sustainable architectural elements.

In addition to analyzing the economics and politics of the world oil market, Finley has produced market assessments for natural gas and carbon. He manages the annual production of the BP Statistical Review of World Energy (now in its 63rd year), and he regularly presents BP’s views on global energy markets to external audiences.