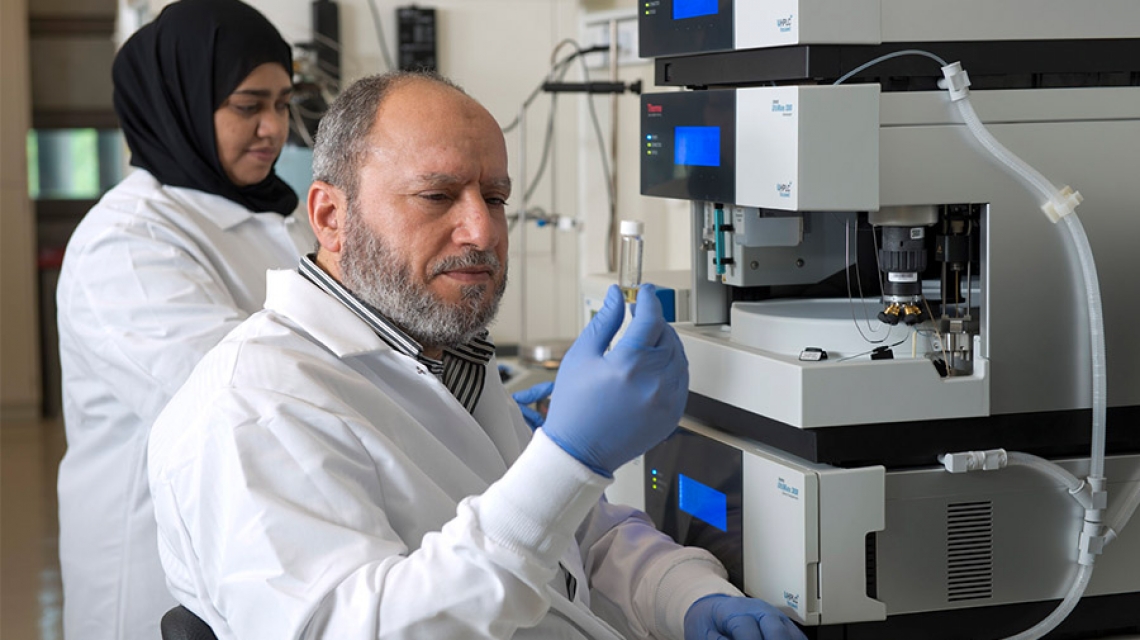 A Masdar Institute Associate Professor is capitalizing on the highly reactive nature of free radicals – which are charged and highly reactive oxygen molecules with unpaired electrons – to treat toxic industrial wastewater.

The novel water pre-treatment system being developed by Dr. Enas Nashef, Associate Professor of Chemical and Environmental Engineering, leverages a type of free radical known as superoxide ion, to destroy toxic chlorinated hydrocarbon compounds present in wastewater in the same way that free radicals in our body damage cells; by stealing electrons from molecules wherever they can.

The free radicals that are produced naturally and continuously in our body, cause oxidative stress – the resulting damage from a molecule losing electrons – to our biological systems. Recognizing the reactive potential of superoxide ions to enhance a number of chemical, biological and industrial systems, scientists have been trying to capitalize on these effective agents for decades.

Now, thanks to research by Dr. Nashef, scientists will be able to use superoxide ions generated in ionic solvents to break down or synthesize organic compounds in numerous new applications.

One such application of superoxide ions generated in in ionic solvents is for the conversion of carbon dioxide into carbonate, a valuable chemical with a diverse range of industrial applications. One of Dr. Nashef’s PhD students is currently working on this project and expects to publish the research findings soon.

Another potential application of superoxide ions in ionic solvents that is being explored by Dr. Nashef is the extraction and destruction of sulfur compounds trapped in oil.  If successful, the research could contribute significantly toward the UAE’s efforts to advance sustainability in its oil and gas industry.

For the pre-treatment of wastewater, Dr. Nashef is working with a PhD student to utilize superoxide ions in ionic liquids to remove chlorinated hydrocarbons from industrial wastewater.

“Sometimes after chlorine is used to purify wastewater, the chlorine reacts with the hydrocarbons present in the water, resulting in a high level of chlorinated hydrocarbon compounds. The superoxide ions in ionic liquid that I generated are able to break down the compound and reduce it to something benign,” Dr. Nashef said.

The ability to use free radicals to prevent the formation of toxic compounds in wastewater is a direct result of the new generation technique that Dr. Nashef developed to synthetically create highly reactive, non-toxic superoxide ions.

In an attempt to make superoxide ions more accessible for a wider range of applications, like treating wastewater, Dr. Nashef discovered a way to generate superoxide ions in an ionic liquid – which can serve as an environmentally-friendly “green solvent” – so that the superoxide ions can be used to catalyze chemical reactions without producing toxic chemicals as a by-product.

This innovative research was included in a critical review paper of superoxide ions, titled “Superoxide Ion: Generation and Chemical Implications,” which was recently published in the journal Chemical Reviews. The paper was authored by Dr. Nashef, along with first author Dr. Maan Hayyan, Senior Lecturer in Civil Engineering, University of Malaya, and Dr. Mohd Ali Hashim, Professor of Chemical Engineering, University of Malaya.

In the paper, the researchers discuss and analyze superoxide ion generation and detection methods, the types of reactions superoxide ions undergo, and current and potential applications of the free radical, which include the destruction of hazardous chemicals and synthesis of organic compounds.

“A critical review of superoxide ions is a valuable contribution to the scientific community, as the chemistry knowledge of superoxide ions is rather scarce. A number of studies on superoxide ions have been conducted over the last 50 years, which is why collecting and critically analyzing these research findings is extremely important to further advance research and understanding of this unique and highly reactive ionic compound,” Dr. Nashef said.

The associate professor said he was especially proud that the manuscript was accepted into Chemical Reviews, which is one of the most highly regarded and highest-ranked journals covering the general topic of chemistry.

Dr. Nashef will continue to study and explore the reactive capabilities of superoxide ions and how they can be further leveraged to support innovation across the UAE’s key water and energy sectors.