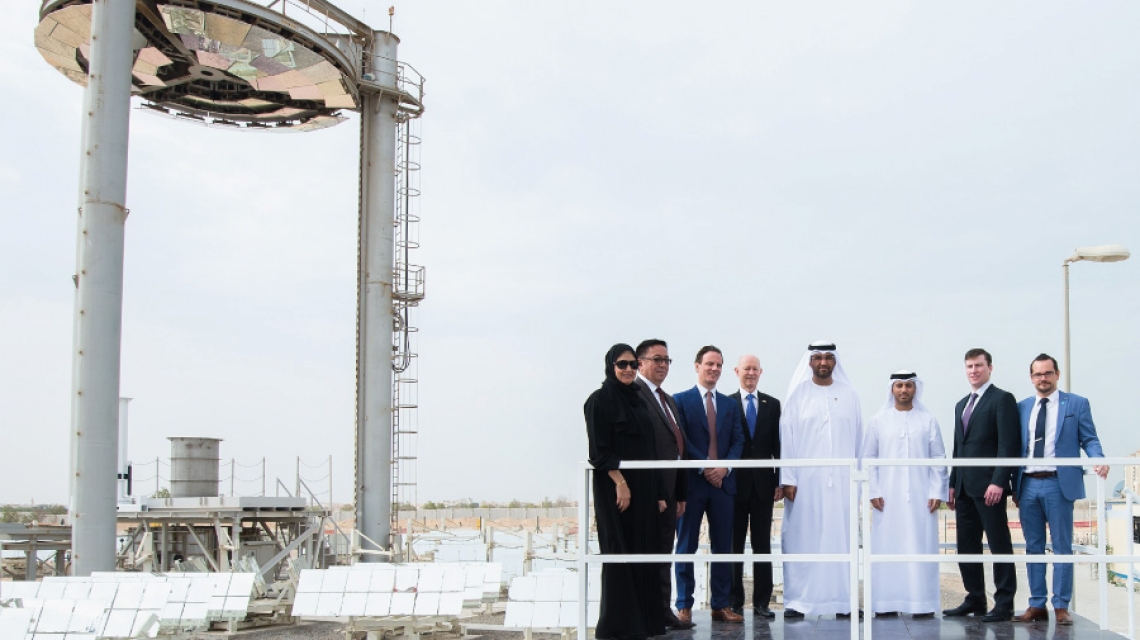 Masdar Institute has launched its new Masdar Institute Solar Platform (MISP) to spur the development of UAE-tailored concentrating solar power (CSP) and thermal energy storage (TES) technologies. The innovative CSP research conducted through the platform could lead to more affordable and efficient solar technologies, which could give a critical boost to the UAE’s solar power generation capacity.

The inauguration of the MISP was attended by His Excellency Dr. Sultan Al Jaber, UAE Minister of State, Chairman of Masdar, and Chairman of the Masdar Institute Board of Trustees Executive Committee. His Excellency Jens Eikaas, Norwegian Ambassador to the UAE, delivered opening remarks on the importance of UAE-Norwegian research and development collaborations.

The launch of the facility featured an announcement by EnergyNest, a Norwegian thermal storage technology developer, that it has validated at the facility its thermal energy storage (TES) pilot that stores thermal energy up to 400°C, making it the first high-temperature thermal energy storage system in the Middle East. This innovative new technology, which uses a special concrete as storage media and a smart modular configuration, has the potential to drop the costs of TES systems in CSP facilities significantly.

The launch also featured an in-depth panel session, which explored the opportunities and potential of the MISP and the Masdar Solar Hub to accelerate the UAE’s growth in the solar energy markets.

Dr. Behjat AlYousuf, Interim Provost, Masdar Institute, said: “We are pleased to announce the official launch of the Masdar Institute Solar Platform, which will provide pioneering solar power companies, universities and our own faculty and students a place to research, develop and test concentrating solar and thermal energy technologies. The Masdar Institute Solar Platform will help to validate CSP and thermal energy technologies at the pre-commercial level by providing the tools and expertise required to test these systems at Masdar Institute’s unique solar beam-down tower, which is the critical link required to translate next-generation CSP systems into commercially viable products. The MISP will help to position the UAE as a global hub for CSP technologies and a leader in the evolving energy market.”
Guests at the MISP launch enjoyed tours of the the platform, where a wide range of innovations are currently being tested on-site, including new silicon mirrors that can better handle the UAE’s harsh desert conditions and the storage of thermal energy for the production of power  using a novel single-tank storage system.

Using Masdar Institute’s one-of-a-kind 100 kW beam-down CSP facility, the aim of the Solar Platform is to build a high-performance CSP research and demonstration infrastructure in the region. This will provide the foundation for new product development, cooperation with local and international companies and academic organizations, and the creation of human capital highly trained in CSP and thermal energy storage (TES) systems in Abu Dhabi — efforts which directly support Abu Dhabi’s initiative to provide 7% of its power generation capacity from renewable energy technologies by 2020.

Dr. Christian Thiel, CEO, EnergyNest, said: “The platform at Masdar Institute allows for a truly unique storage technology to be demonstrated and showcased to the world. We are extremely excited over the prospects of our new thermal storage technology for the region – and we look forward to continuing research efforts and expanding our collaboration activities with Masdar”

Another collaborator currently leveraging the platform’s CSP testing capabilities is Ibiden Co. Ltd., a Japanese electronics and ceramics company. Ibiden is using the MISP to test the ability of its new silicon-carbide mirrors to withstand extreme desert conditions. Testing and adapting CSP technologies and their components to handle the challenging weather of the UAE and wider region is an important focus of the MISP.

In October, Dr. Calvet installed the collaborative Masdar Institute-Massachusetts Institute of Technology (MIT) TES prototype system called the Concentrated Solar Power On Demand Demonstration (CSPonD Demo) at the platform. This prototype directly absorbs and stores thermal energy in the form of molten salts in a single-tank system, which is considerably more efficient  than the conventional two-tank system commonly used today.

The main purpose of the MISP is to develop and leverage both human capital and solar resources to increase the implementation and utilization of CSP in the UAE, which is considered a promising source of solar power for large scale power generation.

“Right now, there is a big focus on PV since costs have come down thanks to investment in research. CSP coupled with TES is an alternative to PV that is capable of producing constant power 24 hours a day, making it well suited for system integration and overcoming the storage challenges that PV currently faces,” said Dr. Calvet.

The innovative R&D outcomes produced by the MISP intend to lead to the creation of next-generation CSP and TES technologies that are more affordable and efficient, making thermal solar energy a more viable option for solar power generation in the UAE and around the world, helping the UAE reach its innovative renewable energy ambitions.

MISP joins the Masdar photovoltaic (PV) testing facility, which was launched in January 2015, as part of the Masdar Solar Hub — the first independent solar testing and R&D facility in the UAE, established through a collaboration between Masdar and Masdar Institute.