Modeling the climate and the hydrology of the UAE 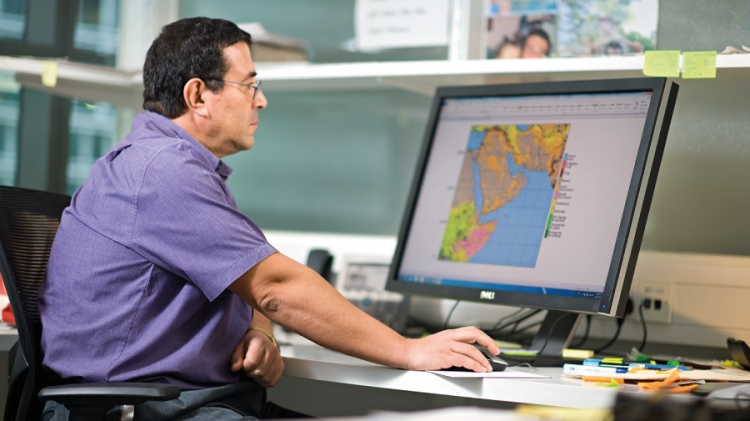 Weather and climate here in the UAE might seem a one-dimensional affair: it is nearly always hot and dry. But there is far more to it than simply an abundance of warmth. The weather has a great bearing on the country, the health of its people, and its energy and water efficiency. Climate is not just temperature, but humidity, sun light, wind, and rain – all of which affect daily life and the viability of any sort of project. In order to understand that impact, and plan for it, scientists and engineers use hydro-climatic modeling, gathering and analysing past climatic data to accurately predict future weather and its patterns. The model can then be put to all kinds of uses – from designing buildings that stand up to extreme wind gusts, to assessing the impact of dust storms on health.

The Masdar Institute’s hydro-climatic modelling lab is studying the evolution of the climatic and the hydrologic variables in the UAE. As well as helping conserve our scarce water resources, it should help plan future wind and solar energy production. For example, we have been looking at the impact of dust on solar energy potential – something overlooked by previous models. We are also trying to model the evolution of the UAE’s overall availability of resources, as well as the uncertainty associated with these estimates – the aim being to plan for rare and extreme weather events.

The models we generate should help others make decisions in a number of fields. For instance, public health officials need estimates of the future range of temperature and humidity – which are linked to cardio- respiratory diseases – and wind – which because of its link to dust in the air has a strong impact on respiratory diseases. We can help in renewable energy projects, too. Projections of radiation, wind, temperature and so on will feed into realistic estimates of the future potential of wind and solar energy.

Those planning new infrastructures – of which there will continue to be plenty in the UAE – also need to know the conditions under which it will have to function. And not just how strong the wind  (for example) will be on average, but what is the strongest gust of wind it might have to withstand during the several decades of its life. Similar, planners need to know how much, how often and how hard it is likely to rain, to build adequate urban drainage networks, and to build small dams and other water retention structures in wadis. In each case, we need not just an average, but the most that will ever be required. Failure to allow for this could be catastrophic.

The Lab will hence have strong interactions with other groups at Masdar Institute such as the Center for Renewable Energy Mapping and Assessment and the newly announced Centre for Water Technologies.

We need to look at the oceans, too, as they play a major role in climate systems and affect weather patterns through their thermal and dynamical inertia. So we are trying to model the interactions between oceans, land and atmosphere. That research, naturally, will focus on simulating the conditions in the Gulf, partly in order to assess the present and future environmental impacts of the desalination plants it feeds. This, in turn, will help others analyse the future state of fish habitats, to work out what rate of fishing is likely to be sustainable.

Finally, we are developing forecasting tools and early warning systems for extreme weather events such as dust storms and flash floods, to avoid a breakdown of infrastructure and prepare response plans in the case of natural disasters. The UAE needs plans for a wide range of natural disasters (floods, droughts, storm surges, and so on) under changing climatic conditions.

This kind of modelling is vital for the UAE. With the establishment of this lab, Abu Dhabi is taking a step closer to its goals of increased welfare, security and sustainability for its people and their future.