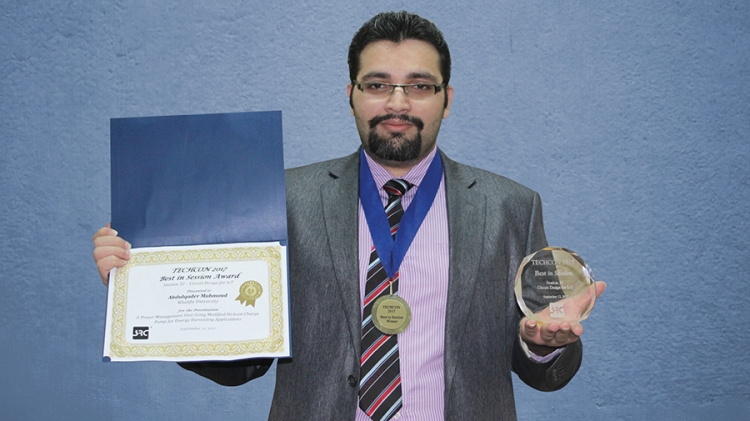 The SRC is a university-research consortium for semiconductors and related technologies with which Khalifa University of Science and Technology and its constituent institutes have been affiliated.

Mahmoud presented his paper titled ‘Power Management Unit (PMU) Using Modified Dickson Charge Pump for Energy Harvesting’ at the TECHCON session on ‘Circuit Design for the Internet-of-Things (IoT)’. His paper focused on a proposed charge pump-based PMU that can be used to regulate the output voltage for any IoT device. A charge pump is a direct current converter device that uses capacitors to increase or reduce the power source voltage.

Mahmoud’s faculty adviser Dr Baker Mohammad Associate Professor Electrical and Computer Engineering said: “I congratulate Abdulqader for winning the ‘Best in Session’ award. His award is a testimony to the Khalifa University of Science and Technology’s high caliber research and helps our new university on the same stage with leading US universities and industry.

” “This research focus is particularly important for the UAE as it enables healthcare-based devices especially for diabetic patients who need to be continuously monitored ” Dr. Mohamed explained.

Mahmoud’s research is part of the Advanced Technology Investment Company (ATIC) SRC Center of Excellence for Energy Efficient Electronic Systems (ACE4S) a collaborative research center established in 2013 by the SRC ATIC MI and KUSTAR to develop energy-efficient wireless sensors and will aim at making advances in the areas of sensor technologies power management energy harvesting and wireless communications circuits.

A delightful Mahmoud said: “I am truly happy to receive this award and proud of being part of Khalifa Semiconductor Research Center and the Khalifa University of Science and Technology in general. I was the only Master’s level student in my session and the rest were all PhD students in their final years from the top universities worldwide. My award reflects the quality of education and hands-on experience that we receive in Khalifa University of Science and Technology’s laboratories through lectures by expert faculty.

TECHCON is the primary event for the SRC to showcase the best research sponsored by its members and students. The technology conference features research progress among hundreds of university students faculty and industry experts and brings together those involved in microelectronics research to exchange news about the progress of new materials and processes created by SRC’s network of more than 100 of the top engineering universities