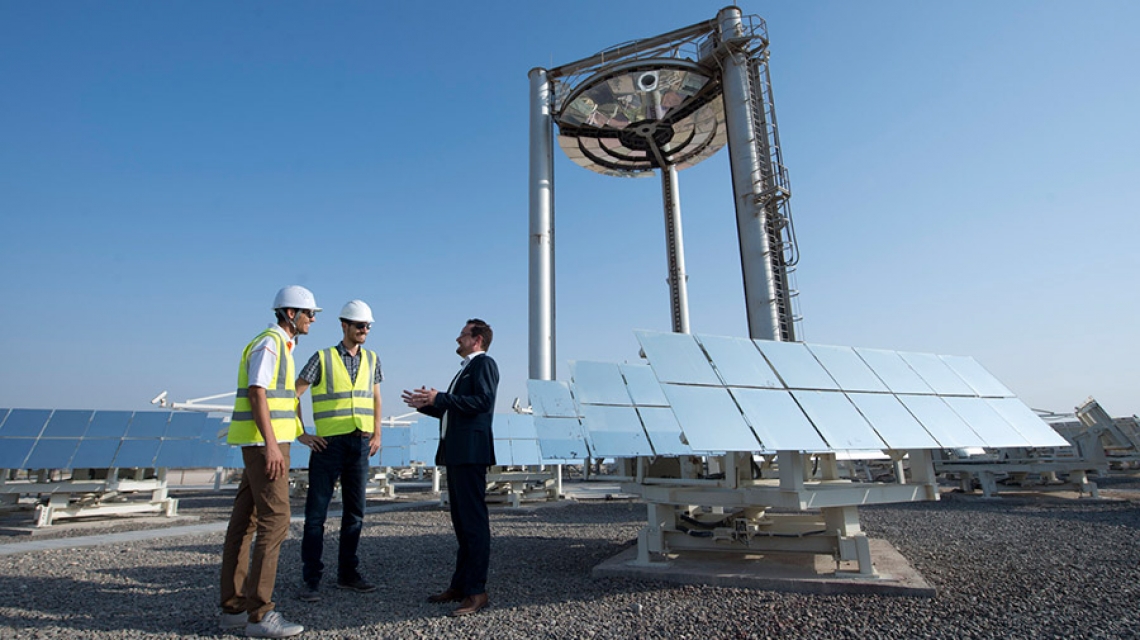 Advancement of solar power technologies in support of the UAE’s renewable energy goals has been getting a critical boost thanks to the Masdar Institute Solar Platform (MISP).

“The MISP provides the opportunity for concentrating solar power (CSP) technologies to develop on a significant scale by providing the region with access to a high-performance CSP research and demonstration infrastructure. The importance of this research is underscored by the Dubai Electricity and Water Authority’s (DEWA) recent announcement that they will launch CSP projects in Dubai that by 2030 will generate 1,000MW of solar power,” said Masdar Institute’s Dr. Steve Griffiths, Vice President for Research and Interim Associate Provost.

Earlier this month DEWA announced the plans for the CSP facility at the Mohammed bin Rashid Al Maktoum Solar Park, which is to be the largest CSP project in the world. A group led by Abu Dhabi’s renewable energy company Masdar recently  won the bid to build the third phase of the park, which includes 800 megawatt solar power plant.

CSP systems are considered a promising solar power technology for large-scale power generation. When CSP is coupled with thermal energy storage (TES), it is capable of producing constant power (baseload) for up to 24 hours a day , making it well suited for integration to the electric grid.

The MISP was launched last year in recognition of the increasingly important role CSP will play in achieving the UAE’s renewable energy target of making 24% of its energy mix come from renewable sources by 2021.

Using Masdar Institute’s one-of-a-kind 100 kW beam-down solar concentrator facility, the aim of the MISP is to provide local and international research institutes and solar companies the opportunity to research, test and validate new CSP components and TES systems capable of withstanding the UAE’s harsh desert climate in order to increase the implementation and utilization of CSP in the UAE and wider world.

The 20-meter high tower is surrounded by a solar field of 33 heliostat mirrors in three concentric rings, which adjust their angle to track the sun as it moves across the sky, and direct the reflected light to the top of the tower. Lining the top of the tower is a 45-mirror array which redirects the light from the heliostats toward a receiver at the tower’s base.

In conventional CSP tower systems, the light is concentrated on a receiver at the top of the tower. However, the MISP’s beam-down tower concentrates the light on a ground receiver, which is perfectly configured and convenient for research purposes.

The facility is also being used to test reflector technologies, absorber tubes, heat transfer fluids, mirrors and a variety of components used in the CSP industry.

In order to bring novel CSP technologies to the market, the technologies must first be validated in the field. This pre-commercial testing phase is pivotal to the technology’s transformation into a market-ready product. Currently, two unique TES systems are being validated for their market readiness at the MISP, while one has already completed its validation.

The first one, which was developed by EnergyNest, a Norwegian thermal storage technology developer, uses a special blend of concrete as the medium for storing energy in a smart modular configuration. The system allows for storage of thermal energy up to 400°C, making it the first high-temperature thermal energy storage demonstration system in the Middle East. This innovative new technology has the potential to drop the costs of TES systems in CSP facilities significantly.

Dr. Nicolas Calvet, Chair of the MISP and Assistant Professor of Mechanical and Materials Engineering at Masdar Institute said: “According to our industrial partner EnergyNest, this system could be 30% to 70% cheaper than the conventional two-tank molten salt technology depending on the size of the storage. The pilot results are better than expected and now we need to confirm the results on a longer-term basis.”

In May 2015, Masdar Institute and EnergyNest successfully completed a comprehensive 2 x 500kWh proof-of-concept for the EnergyNest TES technology. Since then, EnergyNest has increased its technical support to demonstrate its TES pilot project’s performance over many charge/discharge cycles, as there is no industrial benchmark for solid-state thermal energy storage systems to use as reference. Therefore, to develop a commercial TES with an expected lifetime of 30-plus years, it has become critically important for researchers to obtain as many charge/discharge cycles as possible within the shortest timeframe to demonstrate the technology’s stability and performance over time.

Thus, by contributing to the development of industrial benchmarks to ensure novel TES systems are technologically feasible on a long-term basis, MISP is contributing important benchmarking data for the CSP industry.

The innovative prototype directly absorbs and stores thermal energy in the form of molten salts in a single-tank system, which is considerably more efficient than the conventional two-tank system commonly used today.

“The CSPonD Demo prototype is expected to directly absorb and store 600 KWh of thermal energy in a one-tank system on the ground, thus avoiding the need to pump molten salt to the top of the solar power tower, which is the method employed by traditional two-tank TES systems. It will produce constant power of 25 kW at all times of the day and night,” explained Dr. Calvet, who is leading the project.

A traditional two-tank molten salt TES uses mirrors to concentrate sunlight onto a solar receiver located at the top of a high tower. The CSPonD Demo system avoids the use of pipes, pumps, and double tanks by bringing the sunlight down directly to a receiver on the ground, which it does through secondary mirrors at the top of the tower or hill side heliostat field. It also avoids costly high-temperature receiver tubes that undergo thermal fatigue and can bring the entire system down with the smallest of leaks.

Another collaborator that leveraged MISP’s CSP testing capabilities is Ibiden Co. Ltd., a Japanese electronics and ceramics company. Ibiden used MISP to test the ability of its new silicon-carbide heliostat mirrors to withstand extreme desert conditions. The goal is to use as little water as possible to clean the light-weight mirrors, which accumulates sand and dust overtime, thus avoiding the over-use of scarce freshwater resources.

Ibiden completed its testing in September of 2015, demonstrating the success of MISP in validating a key CSP technology and helping to position it as a market-ready product.

MISP enhances the research activities of Masdar Institute faculty and students by providing them with a unique research facility where they can test the performance of their innovative sustainability-related technologies.

Masdar Institute Assistant Professor of Mechanical and Materials Engineering Dr. Khalid Askar is using the MISP to test the specialized coatings his research group is developing for durability and weather resistance. His team is also examining the abrasion resistance as well as the dust- and sand-repelling properties of the coating, which he aims to apply to solar photovoltaic (PV) panels.

Other research projects capitalize on facility to monitor circumsolar radiation and aerosol levels, which are important weather factors that affect CSP performance.

A third research project led by Dr. Calvet plans to leverage MISP to test a novel sand-based TES system, which is currently at lab-scale but has the potential to store thermal energy at higher temperatures, up to 1000°C. Being able to reach extremely high temperatures means hotter steam for the turbine – and more efficient electricity production. Utilization of waste with similar properties from the local steel and aluminum industries is also being evaluated as potential TES media.

A TES system based on such a local and natural material like sand or utilization of industrial waste also represents a new sustainable energy approach that is relevant for the economic development of Abu Dhabi’s future energy systems.

The innovative research and development outcomes produced by the MISP intend to lead to the creation of next-generation CSP and TES technologies that are more affordable and efficient, making thermal solar energy an increasingly viable option for solar power generation in the UAE and around the world, helping the UAE reach its innovative renewable energy ambitions.

MISP joins the Masdar PV testing facility as part of the Masdar Solar Hub – the first independent solar testing and R&D facility in the UAE established through a collaboration between Masdar and Masdar Institute – in bringing game-changing solar technologies to commercial maturity.