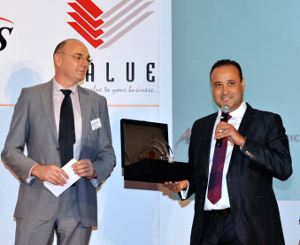 Abu Dhabi-UAE:  21 November, 2013 â€“ The â€˜UAE Solar Atlasâ€™ developed by the Research Center for Renewable Energy Mapping and Assessment (ReCREMA) at Masdar Institute of Science and Technology in collaboration with the International Renewable Energy Agency (IRENA), has received the â€œTechnology of The Yearâ€ award from the Middle East Solar Industry Association (MESIA).

The UAE Solar Atlas project was declared winner in the â€˜Technologyâ€™ category from among three shortlisted finalists at the second annual Middle East Solar Awards (MESA). The award was presented to Dr. Hosni Ghedira, Director, ReCREMA at a gala ceremony that was held at the Intercontinental Hotel, Abu Dhabi. The Middle East Solar Awards acknowledge and celebrate exceptional talent and achievements in the solar sector in the MENA region.

Dr Fred Moavenzadeh, President, Masdar Institute, said: â€œThe MESA 2013 Technology Award for the UAE Solar Atlas strongly indicates the extent of advanced technology tools and the special expertise available at Masdar Institute for a project of this magnitude. With the help of the countryâ€™s leadership, we have created resources that will continue to benefit the global community in identifying clean energy project sites for dynamic investments. All stakeholders including our faculty and staff deserve to be commended for this industry recognition.â€

Dr Steve Griffiths, member of the MESIA Board of Directors, said: â€œThe UAE Solar Atlas project was selected as the winner for its technological contributions to advancing the state of solar power in the region and the technical expertise provided from ReCREMA at Masdar Institute. As an industry organization that represents our stakeholders in the region, MESIA aims to acknowledge and reward the most remarkable technology developments in the solar arena. We congratulate Masdar Institute and the professionals behind the UAE Solar Atlas project for winning this award.â€

A robust satellite-based solar mapping tool developed and validated by Masdar Institute scientists at ReCREMA was utilized for producing hourly/daily/yearly of three solar irradiance maps for the UAE Solar Atlas that is part of IRENAâ€™s Global Atlas.

Dr. Hosni Ghedira said: â€œAn accurate assessment of the spatial distribution of solar resources, with detailed and bankable data for specific potential sites, is designed to help attract investments for creating new solar energy capacity. The entire team at Masdar Instituteâ€™s ReCREMA deserves to be honored for this industry recognition. We are also grateful to all the stakeholders for their support in making the UAE Solar Atlas project a remarkable technological feat.â€

Commissioned officially during the Rio+20 Summit in June 2012, the UAE Solar Atlas, was made publicly available to the international community through the Global Atlas online portal that was developed by IRENA. Masdar Institute was mandated to develop the UAE solar and wind energy resource maps, in addition to developing regional knowledge and leadership in renewable energy assessment and mapping for the Arabian Peninsula and countries with similar climate, mainly in Africa.

Officially launched in April 2012, ReCREMA at Masdar Institute was mandated by the UAE Government to develop national-level solar and wind resource mapping tools. It is actively engaged in research in solar resource assessment in desert and arid environments, solar technologies, climate modeling and remote sensing fields.

The UAE Ministry of Foreign Affairs played a prominent role in initiating the national contribution to the IRENA Global Atlas project. Other local stakeholders in the project include the Dubai Supreme Council of Energy, the Environment Agency-Abu Dhabi (EAD), UAE National Center of Meteorology and Seismology (NCMS) and Masdar Clean Energy.