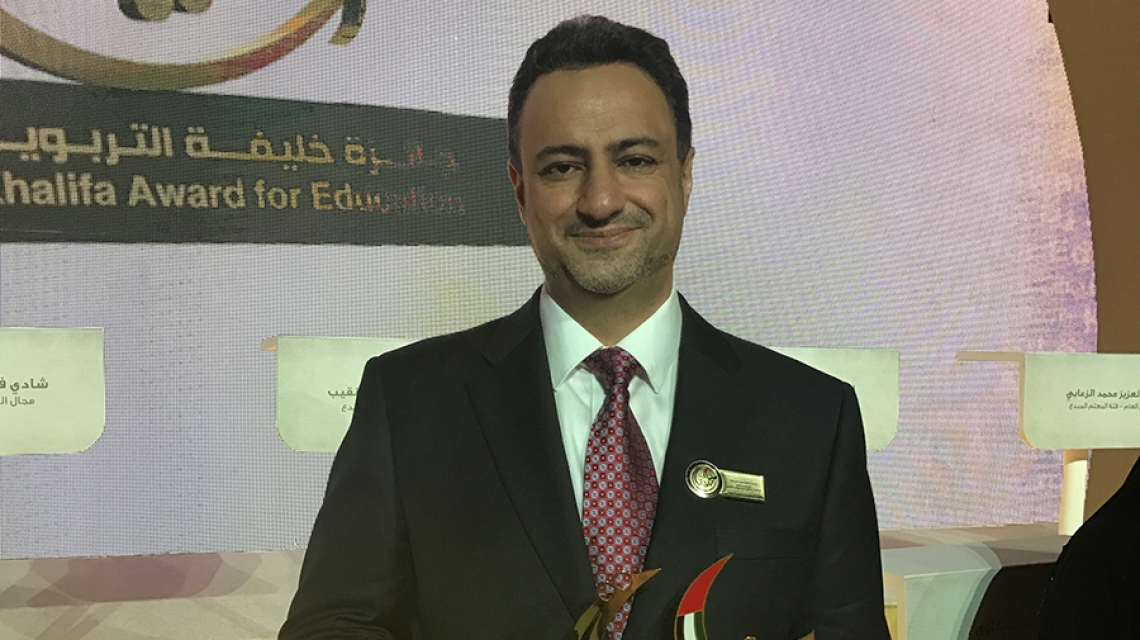 His Highness Sheikh Mansour Bin Zayed Al Nahyan, Deputy Prime Minister and Minister of Presidential Affairs, and the Chairman of the Council of Trustees of the Khalifa Award for Education, presented Dr. Hassan Arafat, Professor of Chemical and Environmental Engineering at Masdar Institute of Science and Technology, with the prestigious ‘Khalifa Award for Education’ at a gala ceremony.

Dr. Arafat won the ‘Distinguished University Professor in the Field of Scientific Research’ award in the ‘Higher Education within the UAE and the Arab World’ category. Dedicated to university professors who teach academic courses, the award committee selects winners on the basis of criteria such as teaching, scientific research and serving the university and the community.

Dr. Behjat Al Yousuf, Interim Provost, Masdar Institute, said: “We congratulate Dr. Arafat for winning this prestigious award that recognizes his commitment to excellence in research. He has contributed to advancing science in key areas, like desalination, water treatment, and waste management, which is helping to meet the UAE’s goal of improved water security. Dr Arafat is a credit to the Institute and his award, during Masdar Institute’s ten year anniversary celebrations, could not have come at a better time.”

Masdar Institute is celebrating ten years since it was established through presidential decree in 2007 to ‘support scientific research and technology in the emirate’ within Abu Dhabi and across the UAE.

The Khalifa Award for Education Award aims to promote education in the UAE and the Arab world through encouraging and motivating creative and outstanding individuals. It aims to usher in a new dynamism in the educational process, in tune with contemporary advancements in scientific knowledge and information technology.

Dr. Arafat said: “This award would not have been possible without the continuous support from Masdar Institute. The research culture, the talented students, the excellent lab facilities and equipment, and the academic freedom to pursue frontline research, were all instrumental in transforming me into the researcher I am today, with achievements worthy of such high recognition. I express my sincere appreciation and gratitude to everyone at Masdar Institute for all the support.”

He added: “The award also highlights that institutional support for research and research excellence is well-recognized in the UAE.”

Dr. Hassan Arafat leads the Membrane and Sustainable Desalination Research Group (MSDR) at Masdar Institute, where he focuses on developing sustainable desalination processes through innovative membrane technologies. This includes synthesis, characterization, and process testing of novel, high-flux and fouling-resistant membranes for desalination applications, especially in membrane distillation (MD) and reverse osmosis (RO). In addition, he has projects on system, economic and thermodynamic modeling of desalination processes. He also has research interests in water and food security.

During his career so far, Dr. Arafat has received 21 research grants, totalling AED 40.4 million (US $11 million). He is also a recipient of several prestigious awards. Most notable among these is the United States Department of Energy’s (DOE) 2013 Secretarial Honor Award, which he received with several of his former colleagues and collaborators in DOE-affiliated labs for research on treatment of nuclear waste. In addition, Dr. Arafat has received the Mondialogo Award by Daimler Co. and UNESCO in 2005 and the University of Cincinnati Distinguished Dissertation Fellowship in 1999. He has also received three international research fellowships – two German DAAD Fellowships in 1995 and 2007 and the Open Society institute/Soros Foundation Fellowship (NY, US) in 2009. He has co-authored more than 200 books, book chapters, peer-reviewed journal publications and conference papers, in addition to many other official technical reports (published by the US DOE). He delivered 43 keynote speeches, seminars, and invited talks worldwide and supervised 29 graduate students and postdoctoral fellows.