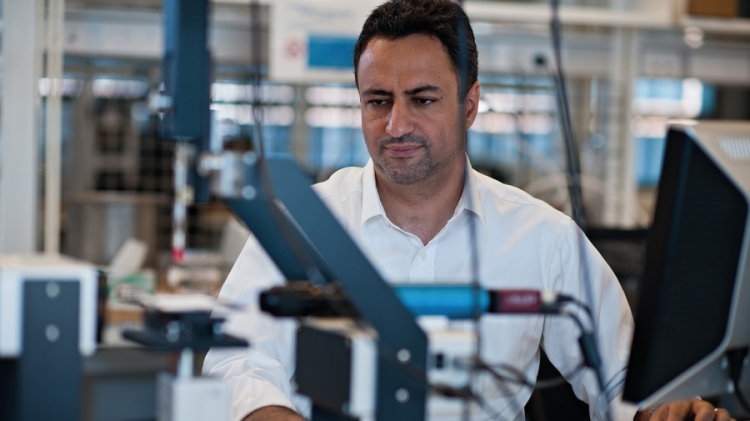 Abu Dhabi-UAE: 09 March, 2014 – Masdar Institute of Science and Technology an independent, research-driven graduate-level university focused on advanced energy and sustainable technologies, today announced that one of its faculty members has been awarded the 2013 Secretarial Honor Award by the United States Department of Energy (DOE).

This prize is the DOE’s highest form of non-monetary employee recognition and is being awarded to Dr. Hassan A. Arafat, Associate Professor, Institute Center for Water and Environment (iWater) and Department of Chemical and Environmental Engineering, Masdar Institute, for research he performed during his time at Argonne National Lab (ANL) in the United States.

The winning team, comprising Dr. Arafat’s former colleagues at ANL, a few collaborators at Oak Ridge National Lab (ORNL) and several other DOE-affiliated individuals, was selected for this award after being nominated for their work on ‘caustic side solvent extraction technology’, which was developed for the treatment of nuclear waste at DOE sites.

The technology developed by the team successfully made it through the R&D stage, then to pilot testing and finally to full implementation at the DOE sites. Using this technology, four out of 34 million gallons of high-level radioactive waste have been treated at the DOE’s Savannah River Site since its implementation in 2004 till date.

Dr. Fred Moavenzadeh, President, Masdar Institute, said: “The DOE’s highest form of non-monetary employee recognition for Dr. Arafat through the DoE award reflects the world-class expertise of our faculty body. With the guidance of the UAE’s leadership, Masdar Institute has assembled a team of qualified and respected scientists and researchers who focus on developing human capital in renewable energy. We congratulate our faculty member and hope to see more such honors in future.”

The award citation says: “This remarkable collaboration between DOE laboratories, industry, and academia has moved fundamental DOE research in the chemical sciences to full process implementation. This promises to save billions of dollars in clean-up costs and will accelerate the disposition of millions of gallons of the nation’s most dangerous legacy wastes. It will also accelerate the completion of one of DOE’s highest-priority environmental missions.”

Dr. Arafat said: “This is one of those very rare cases where researchers see their developed processes make it through R&D to full implementation. I was fortunate to have had a chance to work with a team of brilliant scientists from two US national labs and the US Department of Energy to develop a successful innovation. Seeing this process finally put into action to clean hazardous radioactive waste was a dream come true. The Secretarial Honor Award was the bonus. With time and with the support of Masdar Institute, I hope I can utilize my skills to serve the UAE and this region too.”

In 2010, Dr. Arafat joined Massachusetts Institute of Technology (MIT) as a visiting scholar for six months, after which he moved to Abu Dhabi where he is now employed as an Associate Professor in the Water and Environmental Engineering Program at Masdar Institute. He has co-authored more than 110 peer-reviewed journal publications, conference papers, and official technical reports (published by the US DOE). He delivered 23 invited presentations/lectures at international events and institutes throughout the world.

At present, the focus of Dr. Arafat’s research is on sustainable desalination processes and innovative membrane technologies. During his career so far, he has received 15 research grants, totaling US$8.40Million. He is also a recipient of several prestigious awards. Most notable among these are the Mondialogo Award by Daimler Co. and UNESCO in 2005 and the University of Cincinnati Distinguished Dissertation Fellowship in 1999 – one of only two fellowships awarded in open competition among PhD candidates from all University of Cincinnati colleges.