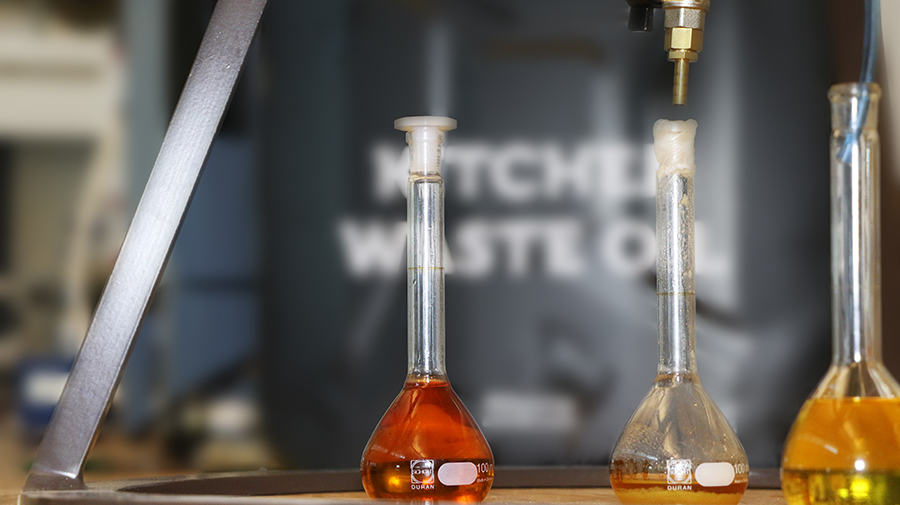 A team of researchers from the Masdar Institute of Science and Technology, in collaboration with Tadweer – Abu Dhabi’s Center of Waste Management, are testing an integrated chemical reactor they have designed that produces high-quality biodiesel from fats, including waste cooking oil, in less time and with less energy and potentially lower cost than traditional biodiesel reactors.

The biodiesel reactor developed by the Masdar Institute team integrates mixing by soundwave agitation, flow mixing by a static mixer, and separation, recovery, and purification for efficient conversion of waste cooking oil into its two main components — biodiesel and glycerol. This process yields much less of the unwanted glycerol and more biodiesel than the high-power mixing method employed by previous reactors and conventional industrial methods.

“The ultrasound method makes biodiesel quickly in a continuous process. Our reactor can produce just as much biodiesel as the large conventional chemical reactors, but at a much smaller spatial footprint,” Hussain explained. Hussain and El Samad co-authored two papers on the optimized biodiesel reactor that were published in the journal of Applied Energy and the International Journal of Thermal & Environmental Engineering, along with three papers that were presented at international conferences.

The biodiesel reactor can produce 50 liters of biodiesel per hour continuously, while a typical industrial-sized reactor may produce 500 liters every 10 hours in a batch process, which is a slower type of manufacturing process that produces products in groups instead of in a continuous flow. Although the production quantities possible are similar, the Masdar Institute reactor has a much smaller physical footprint (occupying 85% less area than conventional reactors) and very importantly can produce a high quality biodiesel.

“We determined the biodiesel’s quality by running it through qualitative tests, then followed with engine performance testing. We found that the biodiesel produced by our reactor generated less soot, nitric oxide, carbon dioxide and sulfur dioxide when compared to the biofuel produced by conventional reactors and petroleum-derived diesel with no compromises in power,” Dr. Janajreh said.

Because of the reactor’s small and compact size, the production capacity is suitable for a large number of organizations that have an interest in sustainable waste transformation. Furthermore, volume can be easily scaled up by linking several reactors together in series to produce the desired quantity of biodiesel.

“Maintaining the size and compactness of the reactor is important, as smaller reactors find more applications,” explained Dr. Janajreh. “This reactor is also fit to convert algal oil, non-edible vegetable oil and tallow from meat processing facilities. We have a long-sighted vision of this innovative reactor where it finds significant international application,” he added.

Biodiesel is a renewable, non-toxic and biodegradable fuel that does not contain sulfur or related compounds that have negative environmental and health impacts. That is why biodiesel has been targetted to play a role in reducing carbon emissions worldwide. The potential of biodiesel for the UAE is particularly good given that the country produces an estimated 20 liters of waste cooking oil per person per year that could be transformed into biodiesel.

Currently, the Masdar Institute team is leveraging their novel chemical reactor to convert the waste cooking oil collected through a community initiative in Abu Dhabi’s Al Raha Gardens into biodiesel.

The next step for Hussain and Dr. Janajreh is to expand their waste cooking oil collection efforts to other communities across Abu Dhabi. Such efforts, the research team believes, could be pivotal to helping the UAE achieve its sustainable energy goals.