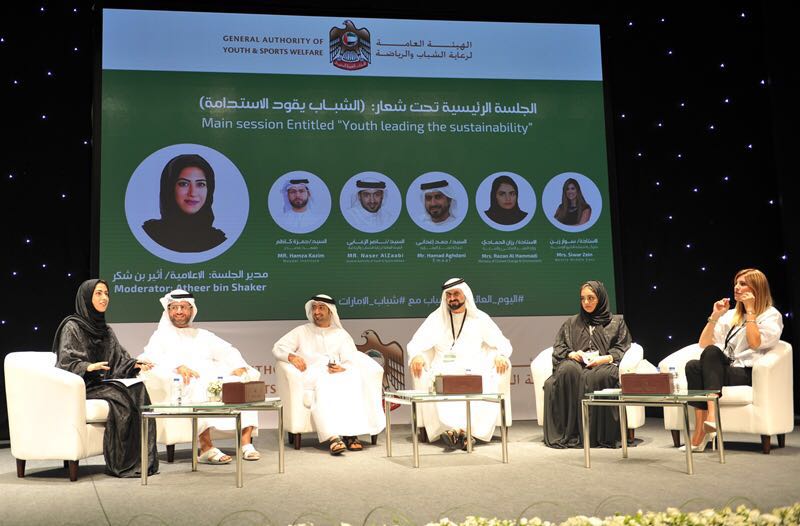 Developing the UAE’s young people into critical thinkers and future leaders who respond to the country’s need for intellectual and human capital in clean energy, water and environment, advanced materials and other sustainable technology-related sectors is a key focus of the Masdar Institute of Science and Technology

Kazim shared this messaged at a panel titled ‘Youth Leading the Sustainability’, organized by the UAE General Authority for Youth and Sports Welfare in Dubai to commemorate the 2016 UN World Youth Day celebrations on 10 August.

Her Excellency Shamma bint Sohail Faris AlMazrui, Minister of State for Youth Affairs, was also present at the event, which was themed “The road to 2030 to eradicate poverty and achieve sustainable development”. Envoys from the UN Secretary General, the Secretary General of Youth and Sport in the UAE, the Resident Representative of the UNDP, and several other officials were also in attendance.

World Youth Day celebrations in the UAE were organized in partnership with the envoy of the Secretary General of the UN, the Office of the Youth Program at the United Nations Development Program (UNDP) and a number of other stakeholders. World Youth Day is an important international event to highlight the aspirations and hopes of the world’s young men and women and facilitate discussion on how youth can be better integrated and empowered to support the development of their communities.

Kazim spoke about the recent visit of His Highness Sheikh Mohammed bin Rashid Al Maktoum, Vice President and Prime Minister of the UAE and Ruler of Dubai, to the Masdar Institute, where a number of UAE national students presented their research projects of relevance to the UAE’s strategic goals and development needs, particularly relating to water, energy and advanced materials.

These projects are the result of Masdar Institute’s collaborative ventures with leading local organizations such as the  Environment Agency – Abu Dhabi (EAD), Dubai Supreme Council of Energy (DSCE),  Mubadala’s Strata Manufacturing, Etihad Airways, as well as global companies such as The Boeing Company, TAKREER, Safran and GE.

Kazim shared various youth development initiatives that Masdar Institute has supported. In January 2011 the UN Secretary General Ban Ki-Moon addressed members of the Young Future Energy Leaders (YFEL) program, an outreach initiative led by Masdar Institute to raise the awareness of students and young professionals in the fields of renewable energy and sustainability.

Kazim said: “Masdar Institute was established as an ongoing collaboration with the Massachusetts Institute of Technology (MIT), to serve as a ‘knowledge-hub’ for the region and works towards creating indigenous R&D capabilities, while addressing regionally-relevant issues. Since inception, we have collaborated with local and international organizations including the UN for sustainable technology research and innovation, achieving outcomes that are relevant to the UAE and the region.”

The Institute’s efficacy as a knowledge hub was validated by its advancement to the 14th spot overall in the 2016 US News and World Report Best Arab Region Universities Rankings, up from the 23rd position last year. The list covers 124 universities spread across 18 countries. Masdar Institute has also been ranked first in the UAE and 20th among Western Asian academic institutions in the Springer Nature Index 2016 annual rankings, which is a ranking systems based on contribution to publications in leading scientific journals.

Kazim concluded: “With such key contributions towards youth and community development, Masdar Institute remains one of the leading academic institutions that supports the UAE’s drive towards creating a knowledge-based economy.”