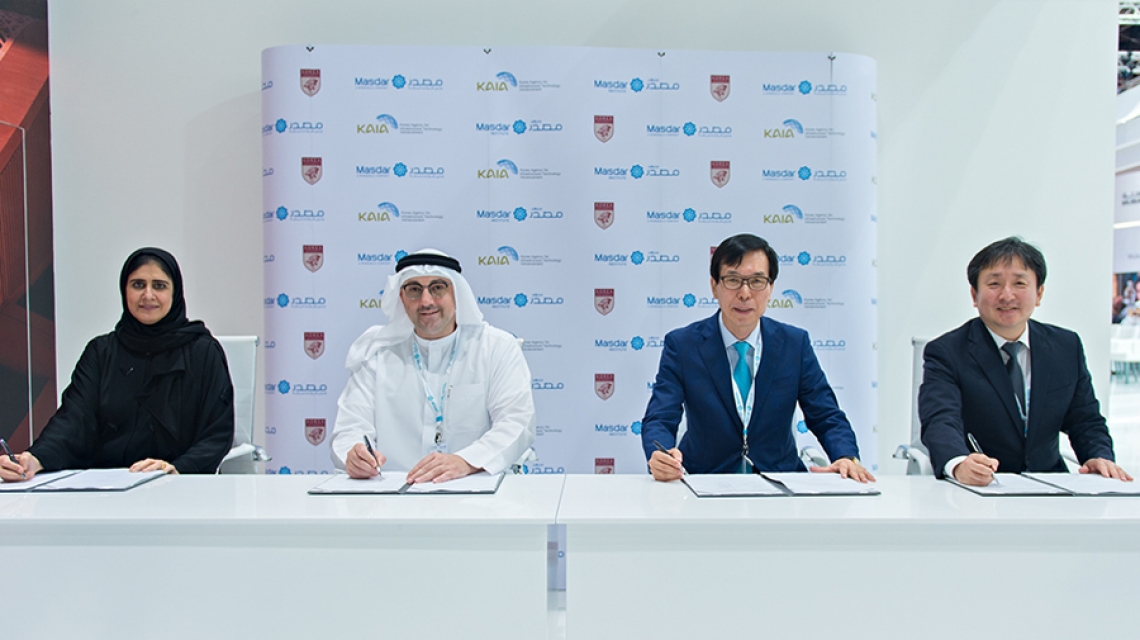 The research project aims to confirm the viability of large-scale production of desalinated water from a plant fully powered by renewable energy. It also aims to demonstrate the potential of using promising innovative desalination technologies to reduce the energy footprint of desalination in the UAE. A consortium of South Korean companies will build a pilot desalination plant in Abu Dhabi to facilitate the research to be conducted by both universities.

The agreement was signed on the sidelines of the World Future Energy Summit (WFES), which is being organized as part of the Abu Dhabi Sustainability Week (ADSW) 2017 at the Abu Dhabi National Exhibition Center (ADNEC). Officials from both universities as well as government representatives were also present at the signing.

Dr. Behjat Al Yousuf of Masdar Institute, said: “For the past many decades desalination has been crucial for meeting the growing freshwater needs of the UAE. Going forward, however, we also recognize that it is also crucial for the UAE to reduce its energy consumption and carbon footprint to attain greater sustainability. Renewable energy-powered and energy-efficient desalination is a win-win that will enable us to do both, and we are hopeful that this collaborative research agreement with the Korea University and the KAIA will help validate the technologies needed to make low-carbon desalination a reality.”

President Kim Byung-Soo of KAIA said: “The Korean R&D project on SWRO desalination, in collaboration with UAE, is expected to strengthen our resilience to resolve global water shortage in response to climate change. We also hope that the innovative technologies obtained through this research will make Korea and UAE more competitive in the global desalination market.”

The research director, Prof. Hong Seungkwan of Korea University also said: “This research agreement provides a strong foundation not only for collaborative innovative research but also academic exchange and cooperation bwtween KU and MI to foster young future leaders in the water and enengy sectors.”

According to the agreement, a collaborative research program will evaluate the performance of the desalination pilot plant. Additionally, it will foster the collaboration with Korea University to develop, test and demonstrate novel pretreatment technologies with high potential for energy-efficient operation.

Dr. Hassan Arafat, Professor of Water and Environmental Engineering at Masdar Institute, will be the principal investigator of the research project, while the research team at Korea University will be led by Professor Seungkwan K. Hong. Dr Arafat has experience in developing desalination technologies and systems, with particular focus on sustainable, low-energy technologies.