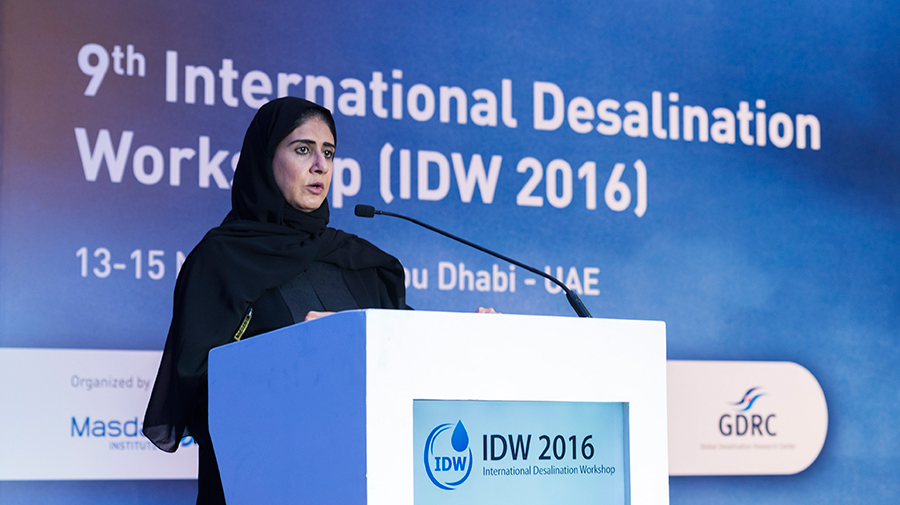 The International Desalination Workshop 2016, which ran from 13-15 November, brought together water technology research scientists and engineers from around the world who are working in both academia and industry. Focusing on all aspects of water desalination, water treatment and reuse, the gathering gave attendees the opportunity to share ideas and hold discussions about their various research projects. South Korea’s Forward Osmosis and Reverse Osmosis Hybrid Center (FOHC) and the Global Desalination Research Center (GDRC) were co-organizers for the event.

In addition to six keynote talks by global leaders in the desalination field, 67 scientific papers focusing on desalination-related subjects were accepted from across the global academic and research community. The shortlisted entries were presented under the categories of desalination and renewables, desalination and energy, novel processes, membrane distillation, forward osmosis, novel membranes, and fouling, as well as a special GCC-Korea session.

Dr. Behjat Al Yousuf, Interim Provost, Masdar Institute, said: “We are privileged to collaborate with our partners to bring the 9th edition of the International Desalination Workshop to Abu Dhabi. Desalination remains relevant to the UAE and all arid regions across the world. Our researchers are already engaged in exploring new innovations for achieving an efficient water desalination process through the use of renewable energy and reduce the cost of desalination. We believe this globally-important event will lead to productive knowledge exchange and result in the deployment of more efficient desalination technologies.”

Prof. Seung-Hyun Kim of Global MVP said: “I am very pleased to host the International Desalination Workshop in Abu Dhabi. The IDW has been successful for the past eight years attracting desalination researchers around the world to South Korea. This year, we’ve decided to move this event to the GCC region at which desalination efficiency is required more than any other regions. I hope this event leads to fruitful collaboration among researchers in the GCC and other regions.”

Among the keynote addresses, Prof. J. Lienhard, Massachusetts Institute of Technology (MIT), spoke about ‘Water scarcity, desalination, and climate change: how can we respond?’, while Prof. E. Drioli, University of Calabria, Italy, discussed ‘A process intensification strategy in desalination and water reuse’. Prof. R. Wang, Nanyang Technological University, Singapore, delivered a talk on ‘Development of Aquaporin-based Biomimetic Membranes for Water Reuse and Desalination’ and Prof. I. S. Kim, from Gwangju Institute of Science and Technology, Korea, spoke on the topic of ‘Economic feasibility of pressure-assisted forward osmosis as a pretreatment for reverse osmosis’. Prof. Hans Vrouwenvelder, King Abdullah University of Science and Technology, Saudi Arabia, also gave a keynote address.

The conference also featured a special plenary session on ‘Low Energy Desalination’ to address the most recent developments aiming to reduce the energy footprint of desalination.

In addition, a two-day intensive professional training course on membrane-based desalination processes (Desal-Pro) was held on 12-13 November at Masdar Institute as part of the workshop. The course delivered a comprehensive understanding of membrane-based desalination technologies from theory to applications, and will cover reverse osmosis (RO), forward osmosis (FO), pressure retarded osmosis (PRO), membrane distillation (MD), and its integrated processes. It was co-organized with Gwangju Institute of Science and Technology, Korea, the University of Hong Kong, and the University of Technology Sydney, Australia.