Masdar Institute among Leaders in Patent Filings from UAE

Abu Dhabi-UAE: 20 MAY, 2013 – Innovation remains the catchword in today’s digital world driven by technology. But what drives this innovation… knowledge-seekers of the academia, industry leaders focused on return on their investments or the government machinery keen to boost R&D?

Patents act as a tool in the innovation ecosystem that allows technologies to be secured, developed and introduced to the public for benefit and enjoyment. In many cases, it’s the only thing preventing smaller companies from being side-lined by the larger competitors. In short, patents provide smaller, developing companies a competitive advantage over their bigger rivals. Patents are filed by some vibrant sectors of the economy, in addition to academia. 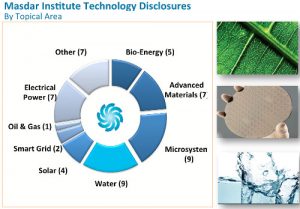 One key indicator of innovation output has traditionally been patent filings. According to the World Intellectual Property Indicators 2012 report, patent filings worldwide grew by 7.8% to 2.14 million in 2011, as  measured at national patent offices. Utility models (UM), industrial designs and trademark filings increased by 35%, 16% and 13.3%, respectively.

The year 2011 also witnessed China’s State Intellectual Property Office (SIPO) overtaking the United States Patent and Trademark Office (USPTO) to become the largest patent office in the world. China’s SIPO surpassed the Japan Patent Office (JPO) in 2010. At the same time, statistics from a GCC office on intellectual property rights (IPR) indicate that there have been 21,121 applications for patent of which 922 originated in 2012. Of the total, 1,291 have already been granted approval.

While patent filings are typically dominated by industry players, academic institutions have also relied more on patents as a tool in protecting and commercializing their R&D. Interestingly, in the US, the 157 universities that responded to an annual survey of the Association of University Technology Managers said they completed 5,398 licenses and filed for 12,090 new patents. They also created 617 start-up companies. These universities and their inventors earned more than US$1.8-billion from commercializing their academic research in the 2011 fiscal year, collecting royalties from new breeds of wheat, from a new drug for the treatment of HIV, and from longstanding arrangements over enduring products like Gatorade, a sports drink.

Even though the year 2011 witnessed 194 international patent filings by UAE applicants, the numbers need to increase even more rapidly in the coming years if the country would like to remain globally competitive. Therefore urgently required are dedicated efforts and intensified contribution from the region’s leading universities and post-graduate institutions.

With one patent issued and 21 active applications pending at present, Masdar Institute remains in the forefront of innovation and R&D in clean energy and sustainable advanced technology. One recent patent filing from Masdar Institute happened in February 2013 for a novel system membrane that enables an ‘in-situ’ membrane cleaning for desalination. Masdar Institute also has the distinction of filing for 13 patent applications in 2012 alone.

Dr. Fred Moavenzadeh, President, Masdar Institute, said: “With publications of papers in 311 peer-reviewed journals, 330 conference papers, two full books and 38 invention disclosures, our success not only quantifies but illustrates the depth of the knowledge imparted to students. With the support of the country’s leadership, as we incrementally strengthen our academic and research offerings each year, we also enhance our capabilities in scientific discovery. We hope to further intensify our contribution and accomplish more innovations in clean energy and advanced sustainable technologies in the future.”

Of special interest to institutions involved in energy-related research is the fact that patent applications for four energy-related technologies – fuel cells, geothermal, solar and wind energy – increased by 8% in 2010 to 34,873. Residents of Japan filed the largest number of applications relating to solar energy and fuel cell technologies, while residents of Germany and the US accounted for the largest numbers of applications relating to geothermal and wind energy, respectively.

Masdar Institute currently has an issued patent titled ‘Apparatus and Method for Energy-Efficient and Environmentally-Friendly Recovery of Bitumen’, that was obtained by Dr Matteo Chiesa, Associate Professor – Mechanical Engineering / Materials Science and Engineering, and others. However, patent applications under review in various international patent offices currently stand at 21. It is expected that several will complete the 2-3 year application process and get issued as patents within the next year. As Masdar Institute research continues to contribute innovative solutions and advances state-of-the-art technologies, it will continue to file additional patents in the coming months.

The most recent filing from the Masdar Institute, for example, occurred in February 2013 to cover a novel system that enables an ‘in-situ’ membrane cleaning for water desalination purposes. Masdar Institute also has the distinction of filing for 13 patent applications in 2012 alone.

One of the most significant patent filings during 2012 was for ‘Networked-Cellulose Gel’ or ‘NC Gel’. The technology invention led to multiple patents and more are being filed on this material developed by a team of scientists that includes Dr. Raed Hashaikeh, Associate Professor – Materials Science and Engineering, with Dr. Boor Lalia and students Ali Asghar and Yarjan Abdulsamad. Based on the NC Gel, Dr. Hashaikeh’s team has made a ternary solid polymer electrolyte for Li-ion batteries with ionic conductivity on par with organic solvents and currently the material is being tested in lithium-ion coin cells. The interesting properties and behaviour -upon drying – of the NC material has proven applicability in several areas, ranging from pharmaceutical excipient, membrane support, and water retention material.

But one fundamental factor that is most required to drive innovation is R&D spending. As recent reports point out, the GCC and the MENA regions lag behind others in this area. Comparatively, China spends more than US$100 billion on R&D each year, says a Bloomberg Businessweek report. According to a report titled ‘Building Bricks: Exploring the Global Research and Innovation Impact of Brazil, Russia, India, China, and South Korea’ released by business-information provider Thomson Reuters, China plans to increase the proportion of its GDP spent on research and development from 1.75% in 2010 to 2.2% in 2015. By comparison, the US spent 2.79% of its GDP on research in 2010, the latest year for which data are available, the report adds.