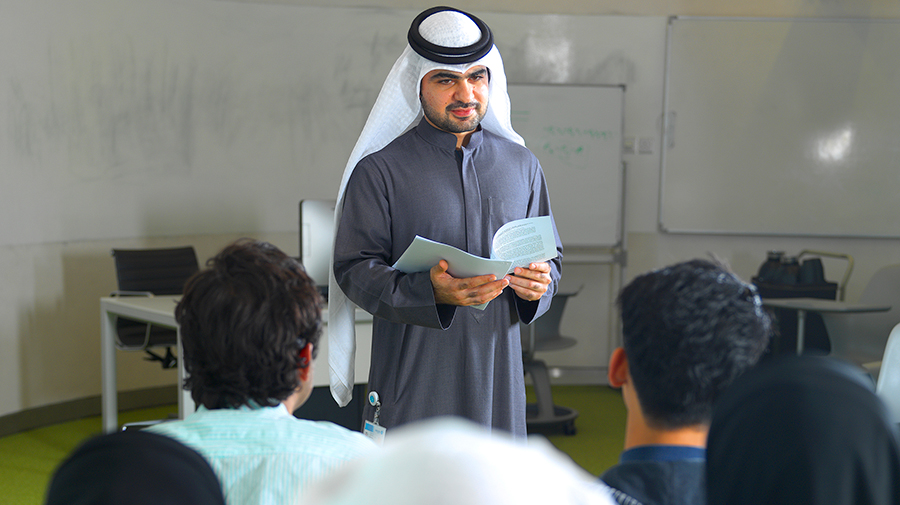 Since MI hosted its first commencement in 2011, members of its 585-strong alumni community have been pursuing careers that leverage the enriching experiences and broad range of skills gained during their academic studies to advance sustainability in the UAE and abroad, proving the value of their engineering degrees while advancing the legacy of MI to change the world. Following is the journey of how six notable MI alumni are putting their degrees into practice post-graduation through activities centered on improving energy access in developing countries, enhancing sustainable technologies for clean energy solutions, and inspiring the next generation of innovators.

Ayu Abdullah and Kyle Weber, both Class of 2014 MSc in Engineering Systems Management graduates, transferred the skills they gained from their studies at Masdar Institute into a new company that builds on the energy access-related research that was the focus of their thesis work to bring clean energy to developing countries.

The team said that they are inspired to continue and advance their work when they can see the real impact of their projects and courses on the communities where they are delivered.

Abdullah and Weber are grateful for the network and experiences they gained at MI, which brought them together and gave them the fundamental skills to pursue their sustainable development ideas.

“MI was very helpful for developing my understanding of complex systems dynamics, which in a startup and development field is extremely important. Being able to understand the local context and plan how best to allocate limited resources to realize the maximum intended impact is a challenge that must be overcome in order for any success to be achieved,” said Weber, who is Technical Advisor at ENACT.

Aaesha Alnuaimi is another one of MI’s highly accomplished alumni. She became the first UAE national to fabricate thin-film crystalline silicon solar cells in the MI cleanroom in 2012 and later received the Young Emirati Researchers Prize from the National Research Foundation for her Master’s thesis on improving the efficiency of crystalline silicon thin-film solar cells.

After receiving her MSc in Microsystems Engineering from MI in 2012, Alnuaimi continued her pursuit of advanced solar photovoltaics research through MI’s PhD in Interdisciplinary Engineering. Alnuaimi is expected to graduate during the seventh annual MI Commencement Ceremony this May.

“The experience and the skills that I gained helped me to become a self-motivated and independent researcher, and taught me how to apply critical research skills and work collaboratively with people from different disciplines and cultures. I believe that through these skills, MI has helped me establish a strong foundation toward a successful career,” Alnuaimi shared.

Meshayel Omran Lehssoni is a another trailblazing alumna who credits the support received during her research at MI with providing her with the knowledge, confidence and impetus to pursue her career goals in advanced energy, sustainability and carbon emissions reduction.

The young Emirati is currently serving as Director of Future Energy and Security of Supply and Chief Officer of Happiness and Positivity at the UAE’s Ministry of Energy.

“During my studies at Masdar Institute, I focused my thesis on carbon capture and storage (CCS) and when I joined the Ministry of Energy, I was able to work and contribute to climate change efforts. I feel I have been strengthened with the different tools and methodologies taught to me at Masdar Institute, and have added my own inputs to them to do exciting work for my country,” she shared.

Since joining the ministry in 2013, Lehssoni has made significant contributions to the UAE’s negotiations in the United Nations Framework Convention on Climate Change and is supporting the UAE in Mission Innovation, a global initiative of 22 countries and the European Union to dramatically accelerate global clean energy innovation. In addition to this, she is also representing the UAE in a number of international fora including the Clean Energy Ministerial.

Another notable alumni who is also putting to use the skills and core principles he learned while pursuing an interdisciplinary engineering doctorate degree at MI is Class of 2015 PhD graduate Dr. Carlo Maragliano.

During Dr. Maragliano’s PhD studies, he helped develop a material that separates the various wavelengths of light and concentrates them for energy harvesting. His innovative research caught the attention of Solar Bankers, an Arizona-based solar energy generation company, which approached him for a job. Dr. Maragliano has been with Solar Bankers ever since and is currently serving as its chief technology officer.

Solar Bankers was recently selected for the 2017 cycle of the Dubai Future Accelerators (DFA) program and will work with the Dubai Electricity and Water Authority (DEWA) to help transform the utility provider’s traditional business model of generating, transmitting and distributing water and electricity.

Dr. Maragliano credits MI and its professors for inculcating in him the in-depth solar energy technology knowledge and presentation skills that have served him in his continuing progress as a technology innovator.

“During my studies at MI I was able to further expand on the skills I had developed during my Master’s studies, particularly in the area of solar energy. I also traveled the world presenting my research at many conferences and universities, which polished my communication and presentation skills,” Dr. Maragliano said.

Another talented alumni to emerge from MI’s PhD in Interdisciplinary Engineering program and return as a faculty member is Class of 2016 PhD graduate Dr. Majid Khonji, who has become the Institute’s most recent faculty addition following his appointment as assistant professor of electrical engineering and computer science.

Speaking about his new designation, Dr. Khonji said, “I am thankful for what Masdar Institute has given me by way of the skills needed to tackle problems, realize solutions, and conduct research effectively, and now they have received me among their team of expert faculty. This is the beginning of a new phase, and I hope I can continue to contribute to the positive development of the UAE.”

As an assistant professor, Dr. Khonji will be able to expand on the research he conducted during his PhD studies, further extending Masdar Institute’s portfolio of advanced electrical power engineering technologies. He is now bringing his smart grid know-how and expertise to the classroom, where he will continue to contribute to the UAE’s efforts to increase its renewable energy supply and indigenous human and intellectual capital, and use his position to help cultivate the next generation of Emirati scientists.

MI HERALDING AN ERA OF INNOVATORS AND LEADERS

MI’s continuous support of frontline research, coupled with its talented faculty and evolving state-of-the-art research infrastructure, have been instrumental in transforming these alumni, and many others, into the innovative engineers and leaders needed to fuel innovation and inspiration in the UAE and beyond.

With the MI Class of 2017 set to graduate later this month, the world will see 108 more highly qualified graduates join MI’s growing alumni community, empowered with the skills needed to build on the achievements of previous alumni to continue the important work of making the world a better, more sustainable place.