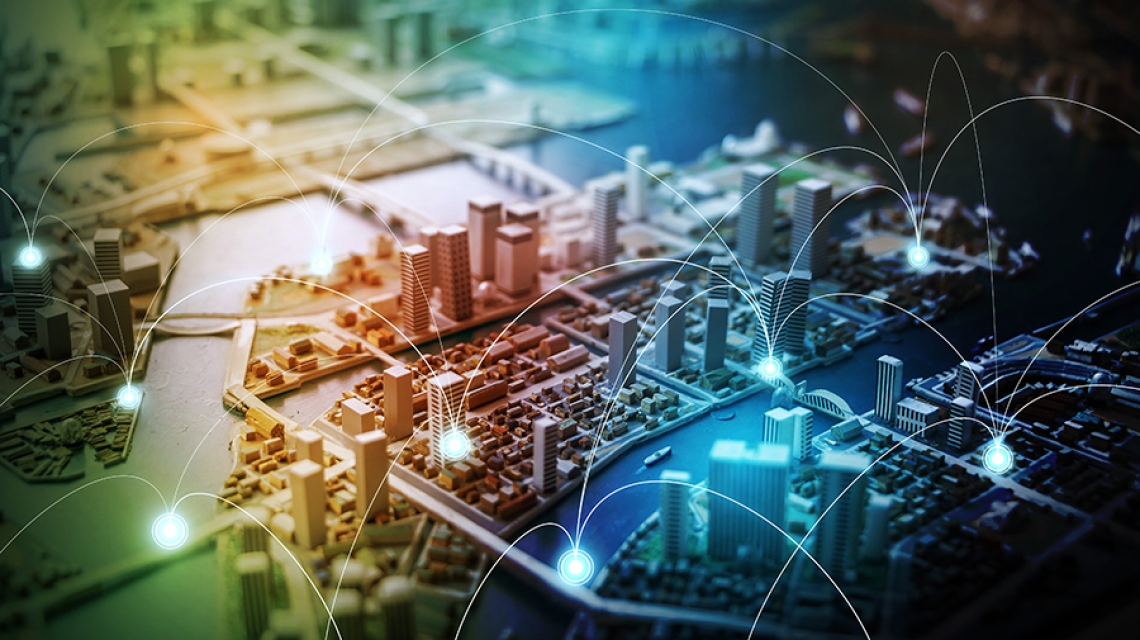 Masdar Institute has launched two research centers aimed at accelerating development of the UAE’s communications infrastructure and preparing the country for the next generation of wireless communications networks, known as 5G wireless.

The newly established Center of Excellence on Integrated Photonics and Center of Excellence on Radio Frequency/5G Communications – which were developed in collaboration with the Semiconductor Research Center (SRC) and GLOBALFOUNDRIES – aim to conduct research and development (R&D) of the key technologies needed to make faster, smoother and more reliable data transmission a reality. Such technologies will be critical to transforming UAE’s cities into connected, smart and sustainable urban centers where tremendous amounts of data will be generated and transferred every second.

“5G technologies will support the development of truly smart cities, as the explosion of data that will need to be transferred between people, cars, buildings and other infrastructure will require extremely fast and diverse data traffic that our current fourth generation (4G) networks cannot accommodate. Integrated photonics is an essential part of the semiconductor industry roadmap to support the next generation of data centers that increasingly rely on the transfer of massive amounts of data but at high efficiency and low cost,” explained Dr. Steve Griffiths, Vice President for Research and Interim Associate Provost, Masdar Institute.

“Masdar Institute developed these new centers of excellence to not only ensure that the UAE will be in a position to capitalize on photonics and emerging 5G networks, but to also put the UAE at the forefront of the semiconductor industry technology roadmap through collaboration with our industry partner GLOBALFOUNDRIES.”

5G technologies and photonics promise to increase data rates from millions to tens of billions of bits per second, or up to 10 gigabits per second – which is over 100 times faster than the rate available from current 4G wireless technologies. This faster speed, coupled with much greater bandwidth – which refers to the amount of information that can be carried through a network – will open up new capabilities, like the ability to download a high-definition (HD) movie in seconds and add billions of internet-connected devices to the network. Most importantly, this rapid internet speed and ultra-low latency (or lag time) will enable the development of the Internet-of-Things (IoT) systems that are at the heart of smart cities.

The smart cities of the future – which aim to improve efficiency through capabilities like monitoring traffic congestion, pollution levels, parking levels, and energy consumption and feeding that information to a smart car or smart device in real time – depend on a robust information ecosystem that can transfer significant amounts of data almost instantly, which requires a high-speed data transmission infrastructure.

However, in order for the full potential of a 5G wireless network to be realized, more research and development of the key technologies that underlie an advanced communications network – particularly in the fields of radio frequency (RF) transceivers and photonics – is required. The Masdar Institute Centers of Excellence have been established in response to this need for innovative, low-cost enabling technologies that will accelerate the development and deployment of key semiconductor technologies needed to support a high-speed data transmission infrastructure both regionally and globally.

Masdar Institute Associate Professors of Electrical Engineering and Computer Science Dr. Mihai Sanduleanu and Dr. Mahmoud Rasras will be heading the two centers. They believe the centers’ pioneering 5G and photonics-focused research will result in the development of valuable human and intellectual capital that could provide the base for a new sector in the form of 5G-capable integrated circuits and photonics in the UAE.

CENTER OF EXCELLENCE ON RF/5G COMMUNICATIONS

The research being conducted through the Center of Excellence on RF/5G Communications will focus on the development of transceivers equipped with integrated circuits embedded with hundreds of antennas capable of high-speed data transfer at the bandwidth frequencies being opened up for 5G networks, which include the 28 GHz, 38 GHz and 73-76 GHz radio frequency bands.

However, while higher frequencies can carry data faster, they don’t travel as far as lower frequencies. The communication range is around 200 meters. To increase the distance that data can travel on higher frequencies, and throughput, or the amount of data that can be transmitted, engineers have developed a technology called multiple input and output (MIMO) antennas to boost signals.

MIMO antennas employ multiple antennas on both transmitter and receiver, creating many paths for data to leave one transceiver and arrive at the other. Advanced signal processing technologies can distinguish between the various paths that data can travel on between the two communication pairs.

A key goal of the MI Center of Excellence on RF/5G Communications is to increase the number of MIMO antennas and develop solutions for increased throughput and low latency. The integrated circuits developed at Masdar Institute and GLOBALFOUNDRIES will be found in devices like smartphones and in the base stations.

“The work we are doing is groundbreaking in the region. We are planning to design and demonstrate new integrated circuits and techniques with ultra-low power transceivers that will enable the proliferation of 5G technologies around the world, while providing the UAE with the intellectual capital to fuel the country’s semiconductor industry,” Dr. Sanduleanu remarked.

CENTER OF EXCELLENCE ON INTEGRATED PHOTONICS

As a compliment to advanced transceiver technologies, silicon photonics supports the transfer of massive amounts of data with high energy-efficiency at a low cost across multiple distances. In photonics, data is transferred between and within devices by optical rays through optical fibers and waveguides instead of by copper wires, which enables more data to travel at much faster speeds and at significantly lower power consumption.

As the world becomes increasingly digitized, data centers – which house large clusters of data servers that store, process and disseminate data to computers and connected devices – must be equipped to store and transmit significantly more data without consuming an excessive amount of energy. In response to this need, MI’s Center of Excellence on Integrated Photonics was established to develop next-generation photonic technologies that will help keep the power consumption of data centers as low as possible while ensuring that data transmission is fast enough to support growing bandwidth demand of more than 40% per year.

“We are working to develop optical components that will enable a larger bandwidth in data centers, while consuming extremely low power,” explained Dr. Rasras.

Dr. Rasras’ team currently faces two challenges. One is increasing the amount of data that a single optical fiber can transmit from the current 100 gigabits per second to 400 gigabits per second to support data centers increased bandwidth demands. The second challenge is the problem of integrating photonic components together with electronic components, including silicon-based transistors, on a single integrated circuit.

Dr. Rasras believes the solution to these problems could lie in silicon photonics.

“In silicon photonic chips, optical components and silicon technology are combined on the same chip, allowing fast transfer and incredible bandwidth,” he explained. “Using silicon for the photonics elements allows them to be integrated with existing electronics, while also being more affordable.”

The associate professor also aims to increase bandwidth of silicon photonics by either bundling up to eight channels onto a single fiber, which will enable the required 400 gigabits of data to be transferred per second – a four-fold increase in bandwidth over current data rates – or by enabling few wavelengths to carry multiple channels.

Ultimately, the MI Center of Excellence on Integrated Photonics will work to improve the energy efficiency and speed of data transmission within data centers by advancing photonics-integrated electronic systems so that the people, cars, devices, and cities that rely on that data will be able to access it instantly.

Masdar Institute is particularly well-suited to lead R&D for the advancement of RF transceivers and integrated photonic components in the UAE. Both of its centers of excellence build upon previous research conducted by Dr. Sanduleanu, Dr. Rasras and others through the Institute’s Center for Microsystems (iMicro).

For example, the ATIC-SRC Center of Excellence for Energy Efficient Electronic Systems (ACE4S), which was established at MI through a partnership between the Advanced Technology Investment Company (ATIC), the Semiconductor Research Corporation (SRC) and Khalifa University has spearheaded important research in the area of sensors. Research conducted through that center included wireless communication, on-chip communication, low-power energy harvesting and sensing for medical applications.

Another center at Masdar Institute that helped support its most recent semiconductor research activities was the Mubadala-funded TwinLab Research Center for 3D Stacked Chips in collaboration with the Dresden University of Technology (TU Dresden). In this center, researchers studied solutions to advance the energy-efficiency and performance of 3D integrated chips, through which important research findings were discovered that will be useful in the newly established Centers of Excellence. Earlier this year, a book on research conducted through the Center for 3D Stacked Chips, titled “3D Stacked Chips: From Emerging Processes to Heterogeneous Systems”, was published by Springer.

By leveraging its robust experience and expertise with microsystems research, and partnering with the region’s leading industry experts in the field, Masdar Institute is set to develop the innovative semiconductor technologies needed to achieve the UAE’s innovation goals.