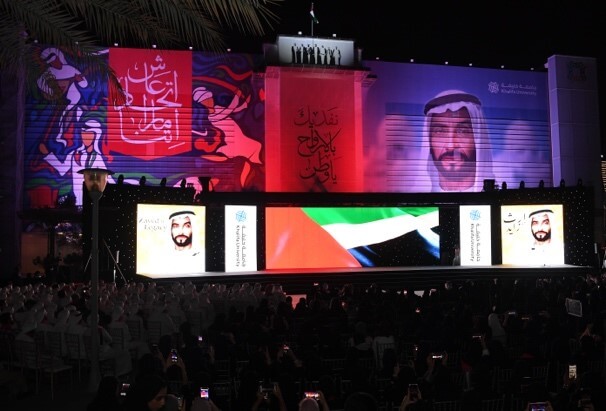 The Khalifa University community celebrated the 48th UAE National Day with several activities including student-led events on its Main and Sas Al Nakhl (SAN) campuses on 26 November. The activities reflected the ‘Year of Tolerance,’ which aims to raise the UAE’s status as a global frontrunner for acceptance and coexistence.

In his UAE National Day message, Dr. Arif Sultan Al Hammadi, Executive Vice-President, said: “We are proud to host the student-led events on the occasion of the 48th UAE National Day celebrations, demonstrating our commitment to the path of tolerance shown by the UAE Founding Father Late Sheikh Zayed bin Sultan Al Nahyan and the current leadership. We believe the events at our campuses will not only illustrate the students’ extent of involvement in remaining part of the UAE’s heritage and success, but also in upholding the values directed by the leaders to ensure future progress.”

Celebrations at the SAN Campus began at the Arzanah and Habshan buildings where students gathered for the flag hoisting and the singing of the National Anthem. After the unfurling of the UAE National Flag, the festivities started and traditional Emirati Dhiyafa were served to students, faculty, and staff.

Activities at the Main Campus also opened with the National Anthem and unfurling of the flag as students gathered in the open courtyard near the S-building after 4pm.

Student-sponsored stalls included the UAE-Korean Corner, the Year of Tolerance booth, the ‘National Memories Museum,’ and a special booth dedicated to ‘Evolution of UAE Medicine’.

The UAE-Korean Corner included a UAE Majlis, a Korean Majlis, an Emirati-Korean Dukkan, an Engineering Challenge, Kids’ area, and a photo-booth to capture special moments.

The ‘Year of Tolerance’ booth highlighted how the UAE remains a global capital for tolerance since its establishment and a bridge of communication among the people of the world and their various cultures, in an environment of openness and respect that rejects extremism and promotes coexistence. The newly-elected Khalifa University Student Council oversaw the booth where international students highlighted the UAE’s contribution to tolerance, coexistence, and openness to different cultures.

The Student Council also organized a photography competition titled ‘UAE Through the Eye of the Lens’. With the theme ‘Landmarks of the UAE,’ around 10 professional photos taken by students were displayed for the competition.

At around 6pm, the program started with a stage performance by students, followed by welcome messages, a Zayed Legacy Show, and a short film titled ‘Zayed Tolerance Pledge’. The highlight of the program was a show prepared by the Theater and Emirati Club. The celebrations concluded at around 8:30pm with closing remarks and an appreciation ceremony.