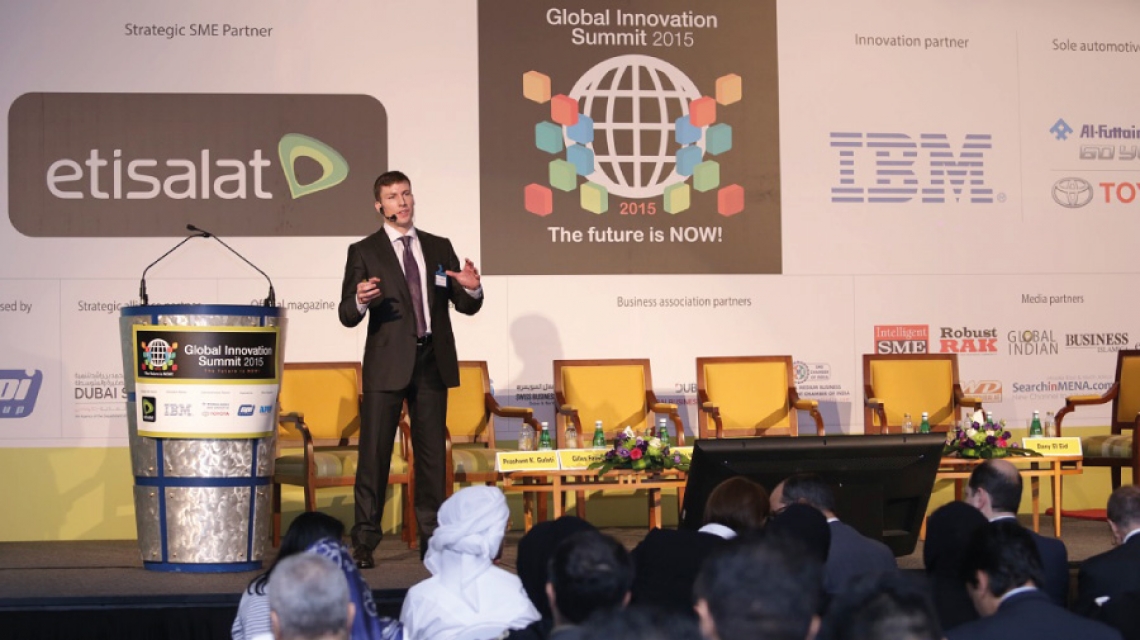 Abu Dhabi-UAE: 02 September, 2015 – Masdar Institute of Science and Technology’s efforts to spearhead technological innovation through research and development (R&D) in sustainability challenges and smart cities were highlighted at the Global Innovation Summit 2015 that was held in Dubai.

Dr. Steve Griffiths, Vice-President for Research, and Interim Associate Provost, offered a keynote titled ‘The role of research, development and collaboration in technology innovation’, while Dr Mohammed Omar, Department Chair, Engineering Systems and Management, moderated a panel titled ‘How to make smart cities smarter.’ Dr Omar later participated in a panel discussion that focused on ‘What is the future of work.’

“The key link between research and development (R&D) and innovation is the translation of the knowledge and technologies produced by R&D into commercial solutions that generate profits. These profits can then be reinvested, at least partially, into R&D to form a virtuous cycle of technology development for economic benefit. ,” said Dr. Griffiths. “At Masdar Institute, we seek to support this paradigm for R&D and innovation through knowledge and technical research at our four institute research centers (iCenters), translational research funding, innovation and entrepreneurship education at our Institute Center for Innovation (iInnovation), translation of intellectual property to companies and new startups via our Technology Transfer Office (TTO), and by entering into multiple industry R&D partnerships.”

In this context, Dr. Griffiths referred to the upcoming launch of a new Masdar Institute-Masdar-BP Technology Accelerator in the fourth quarter of 2015.

He added, “Our Master’s and PhD graduates who are innovating at prominent multinational organizations, the startup companies formed by members of our community, and our successful technology transfer to industry for commercialization are some of the direct outcomes of Masdar Institute’s R&D and innovation activities.”

Currently, Masdar Institute has six approved US patents, 54 patent pending, and has announced 96 invention disclosures, demonstrating the successful outcome of its ongoing research efforts. The research-based institution has also initiated 149 active research projects, of which over 40% are externally funded.

Dr. Griffiths cited Masdar Institute’s research and innovation collaboration with the University of Manchester on graphene and related 2D materials – one of the most exciting research areas in advanced materials and nanotechnology – as one of its important initiatives. “This knowledge partnership is the perfect example of research, development and collaboration to advance technological innovation that is of the high importance and relevance to the UAE,” he said.

Moderating the panel on ‘How to make smart cities smarter,’ Dr. Omar said, “Only breakthroughs in fast computing, physical (grid), procedures and protocols will enable the acceleration of smart city realization. At the same time, there is an urgent need to create the right business models and partnerships towards developing smart cities. All these have become today’s imperative with the current and growing pace of urbanization.”

Quoting recent European Union (EU) statistics, Dr. Omar pointed out that more than 1.4 million people move to cities every week as urban populations in EU countries is expected to grow to 524 million by 2030, from 376 million in 1950. In the GCC countries, urban population will reach 53 million by 2030, compared to 930,000 in 1950. By the year 2030, nearly 60% of the world population is expected to live in cities. He also highlighted the move by EU Horizon 2020, which has dedicated €30 billion in research funding towards tackling societal challenges.

Such growth trends are expected to create mega-cities and mega-corridors, around 30 cities with populations exceeding 15 million, and 80% of the global economic output is expected to come from such urban areas. These factors indicate an urgent need to move towards realization of ‘smarter’ cities.

“Several ‘soft’ or ‘digital’ technologies and products, such as sensors, have already been developed and they will remain key to realizing smart cities,” Dr. Omar explained. “To expedite smart city realization, the focus will be on how better to integrate/plan the capabilities/technologies from the digital fabric (sensors), Internet of Things (IoT), and smart meters, into horizontal infrastructure such as roads, supply chains, electricity grids, and water supply, as well as into vertical infrastructures such as urban morphology and the smart built environment.”

The session concluded with various panelists sharing their perspectives on the realization of the smart city concept in Dubai in the next five years.