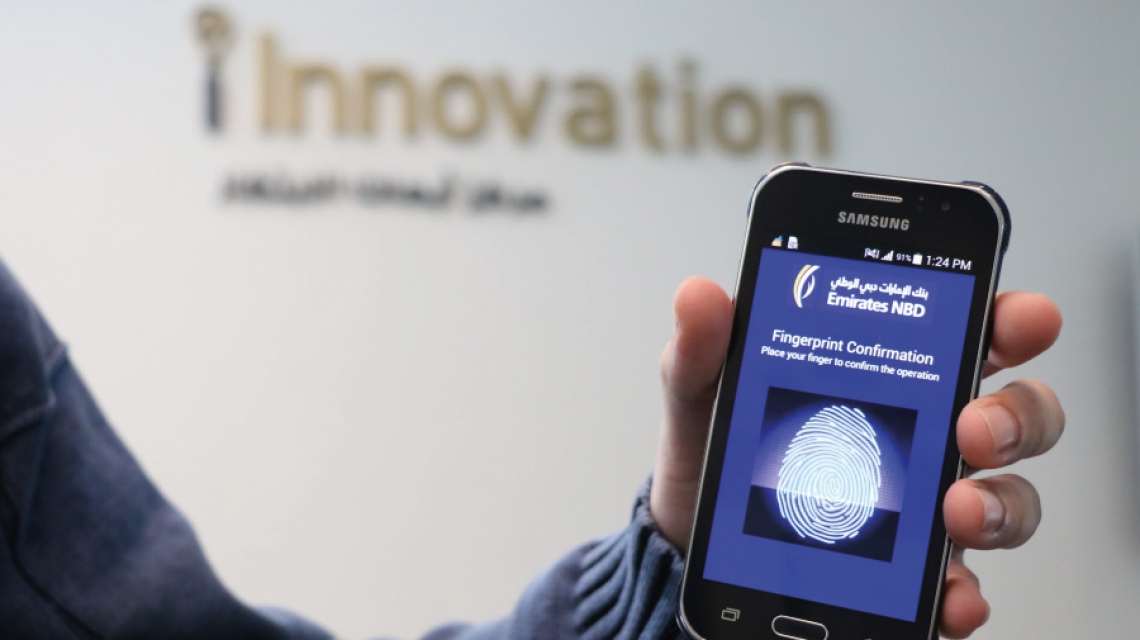 A Masdar Institute Master’s student from the Engineering Systems and Management Program won 1st place at a university challenge hosted by Emirates NBD for his innovative “one-click-to-go” mobile application idea that has the potential to make banking transactions faster, easier and more efficient.

The “one-click-to-go” application would allow users to program the transaction they wish to perform at the ATM ahead of time on their smartphones, significantly reducing the amount of time spent at the ATM.

“The idea came to me after observing the long queues at the ATM machine. Even though most people are there just to withdraw money, it takes a long time to complete this simple transaction. I started thinking about innovative ways to speed up this process,” explained Jean Phelippe Ramos de Oliveira, who presented his winning idea during Emirates NBD’s Annual Innovation Day, which took place during the UAE’s National Innovation Week celebrations held in November of last year.

Ramos de Oliveira believes this idea can also be extended beyond the ATM to inside the bank itself, where “one-click-to-go” banking could make all types of transactions, including cash deposits and money transfers, more efficient.

UAE-based bank Emirates NBD has shown serious interest in the “one-click-to-go” app, and a team from Emirates NBD’s IT Innovation Group is holding discussions internally to explore the next steps.

Emirates NBD’s “Future Intelligence University Challenge” attracted participants from three universities across the UAE. The theme of this competition was “Biometrics in Banking”, focusing on the new technology that is increasingly being employed by banks and finance institutions around the world. Biometric-based technologies have the potential to enable banks to deliver financial services in an affordable and secure way. According to a report by Goode Intelligence, it is estimated that by 2020, companies that develop biometric systems to the banking industry will increase their revenues by US$5.5 billion.

Emirates NBD hosted the university challenge as part of its business strategy on innovation to collect the most innovative ideas from the country’s talented and inventive students, and remain at the forefront of providing unique offerings to its customers.

“We knew that we would receive some truly innovative ideas from Masdar Institute,” said Manal Al Ansari, Innovation Manager, Group IT, Emirates NBD. “We held our first competition at Masdar Institute last March and were impressed with the novel banking ideas developed by their high caliber students.”

As a reward for their participation and exemplary banking ideas, Ramos de Oliveira, Lin and Olim Alimov, a Master’s student in Engineering Systems and Management who participated in both competitions, were offered internship opportunities at Emirates NBD over the summer.

With some 23 local and 34 foreign banks, the UAE’s banking sector has benefited from being in a very sound and robust position. In fact, the UAE’s banking assets outpaced the growth of the country’s gross national product (GDP) by 70%. However, with a strong banking sector comes steep competition, which is why Emirates NBD is searching for innovative banking solutions that will place them ahead of the curve in terms of customer satisfaction and ease of banking.

Dr. Karim Karam, Assistant Professor of Engineering Systems and Management, Masdar Institute, and advisor to Ramos de Oliveira, was extremely supportive of his student’s ideas and encouraged his participation in the competition. Commenting on Ramos de Oliveira’s entrepreneurial spirit, he said, “Jean has the type of innovative spirit that we love to see in our students. His enthusiasm and entrepreneurial ambitions are truly contagious.”

Masdar Institute’s main function is to conduct cutting-edge research in advanced energy and sustainable technologies and information science is a key enabling field. Efforts to support innovation and entrepreneurship in information science and encourage students to embark on entrepreneurial endeavors directly supports the Institute’s goal of developing high-caliber professionals with the skills needed to drive the UAE’s knowledge-economy transformation.