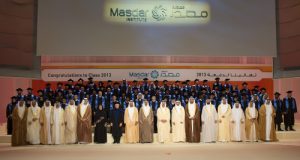 His Highness Sheikh Hazaa said that the graduation of the 3rd batch of students from the Masdar Institute for the year 2013 reaffirms the commitment of the UAE to the upbringing and preparation of a generation with sufficient knowledge in the field of energy, based on the conviction of the need to build knowledge and human capital development as well as the preservation of the environment and the importance of sustainable development, the great pillars of which were laid by the late Sheikh Zayed bin Sultan Al Nahyan.

He added that the leadership is going forward in this wise approach upon the directives of President His Highness Sheikh Khalifa bin Zayed Al Nahyan, in order to create a knowledge-based economy which is strong and diverse, and with the keen oversight of His Highness General Sheikh Mohamed bin Zayed Al Nahyan, Crown Prince of Abu Dhabi and Deputy Supreme Commander of the UAE Armed Forces.

The ceremony started with the UAE national anthem, followed by a short film highlighting Masdar Institute’s timeline through students’ testimonies, who touched on their knowledge experience in the field of energy and the knowledge they acquired to obtain a master's degree.

H.H. Sheikh Hazza congratulated the graduates and wished them success in their life and had a group picture with the graduates.

Speaking at the ceremony, Her Excellency Sheikha Lubna Al Qasimi said the UAE has taken a decisive lead in renewable energy knowledge and sustainable development following the launch of the Masdar Initiative by the country’s leadership.

She said that    with investment in renewable energy through Masdar’s projects and collaboration with the International Renewable Energy Agency (IRENA), the UAE remains at the heart of the clean energy revolution and climate change mitigation efforts.

Her Excellency Sheikha Lubna added: “Your graduation today represents a beginning for your future in the service of your country. Your education at the Masdar Institute in Abu Dhabi has prepared you well to meet your personal and professional aspirations. I am confident that you will leave here knowing that you are well prepared to make a lasting difference in this most challenging world.

Dr. Sultan Ahmed Al Jaber, CEO of Masdar, and the Chairman of the Executive Committee of the Board of Trustees of Masdar Institute, said: “On this momentous occasion, we offer our sincere thanks to the country’s wise leadership for their commitment to human capital development and consistent support of knowledge creation. Masdar Institute is a playing a critical role in strengthening the UAE’s talent base and ensuring we remain competitive in the global economy.”

Dr. Fred Moavenzadeh, President, Masdar Institute, said: “The graduation ceremony of the 2013 class of post-graduate students once again reiterates the contribution of Masdar Institute towards creating intellectual capacity in the country. With the support of the UAE’s leadership, Masdar Institute continues to create value through innovations in advanced technology that have resulted in patents. As the profile of the research-based institution continues to move up among the world-ranked institutions, we will steadfastly remain focused on achieving our academic and R&D objectives that will bring honor to the UAE.”

The first class of students of Masdar Institute had graduated in June 2011 while the second group of students received their Master’s degrees in May 2012. The 2013 class of students are now graduating after successful completion of their research and academic programs in clean energy and advanced technology subjects and are expected to contribute to the globally fast-growing sector.

Established as an on-going collaboration with Massachusetts Institute of Technology (MIT), Masdar Institute integrates theory and practice to incubate a culture of innovation and entrepreneurship, working to develop the critical thinkers and leaders of tomorrow.  With its world-class faculty and top-tier students, the Institute is committed to finding solutions to the challenges of clean energy and climate change through education and research.