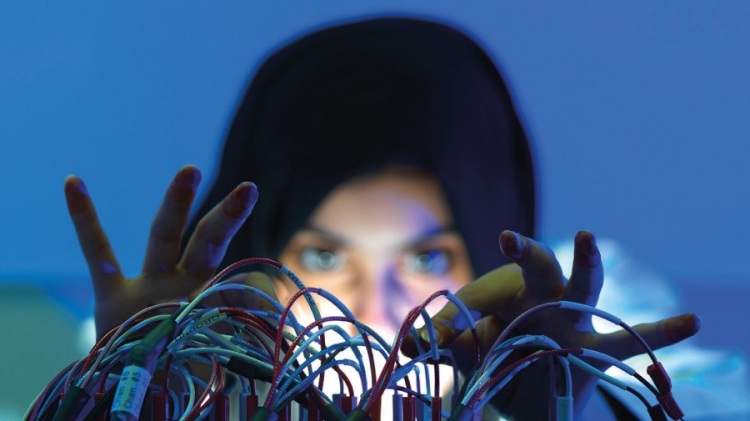 For some 100 years, using alternating current (AC) – where electricity flow surges rapidly back and forth in a circuit — has been the best way to transmit electricity from source to end users. With the help of transformers and high-voltage transmission lines, large amounts of energy could economically be sent to far-flung consumers without the voltage loss that was seen in the original direct current (DC) system. When the AC current reached a point near to the end user, another transformer would be used to decrease the voltage to bring it to the levels needed for individual use.

In today’s world, however, that once simple system has undergone further complication by the fact that many of our modern electrical uses – computers, televisions, electronics, appliances, LED lights, air-conditioning and electric vehicle chargers – run on DC rather than AC. That means that the AC current has to be converted to DC before it can be used in many of our daily applications. In fact, there are often two conversions that must take place – from AC to DC, and then from DC to a lower voltage DC that is required by the loads, such as computers and LED lights. What is problematic in this situation is that each stage of conversion has an energy loss cost. It is estimated that average efficiency of power supply is only between 70-85 percent due to these conversions. On the other hand, power generated by PV or other renewable sources has to face two conversion states,  DC/AC and AC/DC, for growing applications of DC loads.

The post global climate change reality we live in requires every energy loss to be looked at and taken seriously. Not only is electricity by and large produced through carbon emitting processes but it also has become more costly to produce due to the rising cost of carbon-based natural resources. Consequently saving electricity has become important to most individuals, businesses and governments due to financial and environmental concerns.

Additionally, the rapidly developing world has a massive demand for electrification of rural communities. Populous nations like India and China are faced with the significant challenge of getting the electricity that will help raise the quality of life of their citizens to towns and villages hundreds if not thousands of kilometers away from the power source. For AC electricity supply, that would mean laying thousands of kilometers of power lines. And the more distance between power source and user, the greater the line losses. That significant cost and effort to provide electricity to remote locations has thus far been a serious obstacle in the way of development.

A solution to these challenges that is being explored by academia and industry is the return to DC based supply and onsite generation, with the benefit of today’s technological developments. For cities and towns removed from the electricity grid, one potential solution is a renewable energy micro-grid. Such a grid would be powered by more locally available renewable energy, like solar, which also happen to produce DC energy. Not only then is the source of solar energy in essence free, but also because the energy output is on the DC system, it would avoid the usual conversion losses that are seen across the AC grid, making DC even more cost effective.

The challenge right now is the fact that this DC renewable grid idea, while sound, has not been widely tested and demonstrated in all the various circumstances it may need to operate. Governments and utility authorities need to see how such a system functions before they can commit to the sizeable investment needed to build its infrastructure. Scientists and engineers like myself need to show how today’s cutting edge technologies can be worked into a complex energy system that is better suited for individual communities, in terms of cost, reliability and security.

As faculty at Abu Dhabi’s Masdar Institute of Science and Technology, I am involved in a small-scale project that aims to do just that. We will be setting up a DC power system demonstration at the field station that is under construction at Masdar City. In that controllable environment, we will be able to show the entire DC power systems – starting with the solar photovoltaic-based energy production, to energy storage, to transmission and of course, finally the energy use. With a unique parallel operating structure that I have developed, I believe we can even show that the modular and redundant DC system is less likely to have outages than the traditional AC distribution system, as if one power module fails, than another can back it up without a breakdown in the system.

While the idea of DC based systems are not unique – a number of trials and preliminary studies of them have been completed following which Japan, USA and Europe have planned DC based data centers – in this part of the world it is still a fairly new concept. Masdar will power a full suite of common end uses—from lighting to office equipment, refrigerators to A/C compressors, pumps and fans— for the first time.   What we are hoping to do through the DC demonstration is test our improved system structure while giving people a real life example of not only how viable but also how beneficial renewable energy powered DC systems can be.

The system that we create and fine tune at the Masdar City field station would not only give the Gulf region’s utility providers a green and affordable alternative to AC-based energy systems, but it could also be of value to governments around the world. It is estimated that the high voltage DC market could be worth $10 billion in the next five years. That potential is already attracting industrial interest and it is only right that Abu Dhabi’s research institution focused on innovative technological solutions should be a part of making renewable energy-based DC systems a reality.

Dr. Weidong Michael Xiao is an assistant professor of Electrical Power Engineering at the Masdar Institute of Science and Technology in Abu Dhabi.