Giving Robots a Sense of Touch 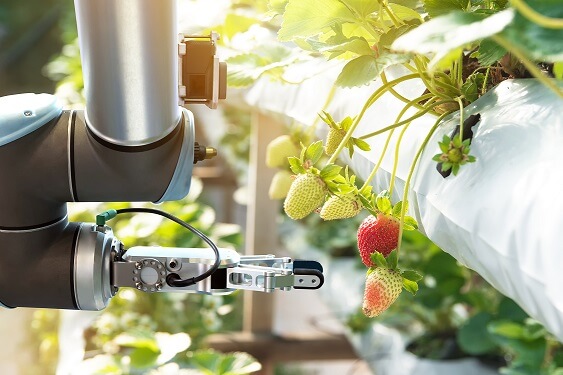 Robots with the same dexterity as humans may soon be a reality, as researchers at Khalifa University develop artificial skin that has the same sensitivity as a human hand. Dr. Panagiotis Liatsis, Professor of Engineering and Computer Science, is working on solving the vast challenge of interpreting touch in robotics with ELECTROSKIN, which mimics the functionality, if not the structure and mechanisms of human skin.

The sensors allow robots to perform tasks ranging from everyday applications to delicate procedures by accurately sensing the vibrations and shear forces that are necessary for gripping and manipulating objects with varying levels of precision.

“Developments in machine learning and AI support the development of autonomous robot operation and a key aspect to safe interaction with the world around it is the detection of direct physical contact between the robot and its environment or humans,” said Dr. Liatsis. “The skin layer of our proposed tactile sensing system is the interface between the complex information collected by the system electronics and the external world.”

The development of a sense of touch is a real engineering challenge. An electronic skin, covering different parts of a robot with sensors responding to mechanical and environmental stimuli, requires development spanning materials and electronics to communication and processing.

“Robotic and prosthetic hands currently use visual cues to ascertain grip but that’s incomplete information,” explained Dr. Liatsis. “The superior abilities of humans to interact with unstructured and often uncertain environments rely on our sensing and perceptual capabilities. In order for robotic systems to aspire to such levels of performance, a tactile sensory system that provides similar information and possesses considerable sensitivity is required.”

Mimicking the way the human finger experiences compression and tension will allow robots to respond to multiple stimuli and better interact with the world around them. Few people would immediately recognize the skin as one of the body’s most important organs but the constant and instant reports it receives of temperature, pressure, and pain allow us to navigate the world with precision and dexterity.

“The human hand is an extraordinary ‘sensor’ system, able to construct rich representations of the properties of objects in the surrounding environment, such as location, temperature, elasticity, stiffness, and texture through a complex network of elementary mechano-receptors, organized in the layers of the human skin,” said Dr. Liatsis.

So far, the best attempts to replicate this feature in robots have resulted in sensor arrays that measure just one or two particular stimuli.

“Currently, there are no commercially available touch sensitive sensors or artificial skins for robotic systems. One reason for this is the potentially complex shape of modern robots,” said Dr. Liatsis. “Such sensing surfaces should be made of soft materials, able to cover large, complexly shaped areas, while providing sufficient measurable pressure range, measurement and spatiotemporal resolutions. Further challenges are sensor stability over long time periods and the ability to be easily replaced in case of malfunction.

“Inspired by the organization of tactile sensing in sentient beings, research into touch must by default encompass investigating a structure similar to the skin. Such a sub-system would be a key enabler in many human machine interaction areas, for example in supporting assistive living for the elderly and more broadly in the context of shared human-robot living and work spaces.”

A robot that is able to feel, understand and respond to touch in accordance with human expectations could lead to more meaningful and intuitive human-robot interaction (HRI). When it comes to building realistic robots, it’s not just the way they look that’s important but also the social acceptance of robots that can come from humanlike skin that enables realistic actions like handshakes.

“Humanoid, social, assistive and medical robots are making their way into our lives. There have been a number of studies employing humanoid robots, which have shown that autistic children respond well to them. Another example is from collaborative work environments, where being humanoid makes it easier to integrate the efforts of humans and robots sharing or contributing to a task,” explained Dr. Liatsis. “On the other hand, a paint spraying robot at a car factory does not need to be humanoid given the task it performs. In essence, it all depends on the context and the resulting expectations of interactions with these machines.”