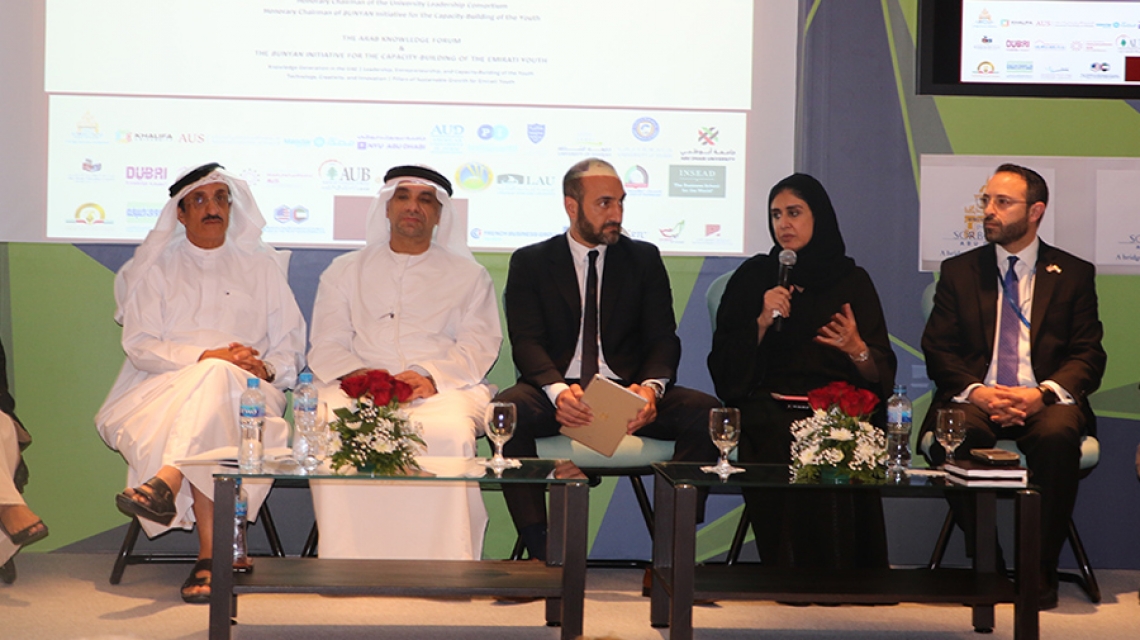 Dr. Al Yousuf made this statement in a panel discussion titled ‘Knowledge Generation in the UAE: Women as Pillars of Sustainable Growth Women in Leadership & Entrepreneurship in the UAE | Success Stories to Tell’ during the Arab Knowledge Forum 2017, held on 18 April at Paris Sorbonne University Abu Dhabi. The event was organized under the patronage of His Highness Sheikh Nahayan Mabarak Al Nahayan, UAE Minister of Culture and Knowledge Development, and Honorary Chairman of the University Leadership Consortium.

“The UAE leadership places enormous emphasis on offering opportunities for women to lead, excel and innovate, especially in knowledge-intensive sectors. At Masdar Institute we aim to achieve this through meaningfully-driven research and development while answering the call of the UAE leadership in sectors such as sustainable energy, space technology and water,” she said.

Dr. Al Yousuf cited the examples of several of MI’s female PhD and Master’s students who have brought honor and accolades to the Institute and the UAE through their academic and research achievements, for which she also credited the UAE leadership’s generous support.

She mentioned MI PhD student Nazek El Atab, who recently won the 2017 L’Oréal-UNESCO For Women in Science (FWIS) Rising Talent Award for the African and Arab region for her research in miniaturizing electronics without losing memory. El-Atab is also one of the four recipients of the L’Oreal-UNESCO FWIS Middle East Fellowships in 2015.

“Nazek is one student that every other student would like to emulate – for her research drive and the recognitions,” shared Dr Al Yousuf.

Another innovative MI student Dr. Al Yousuf highlighted was Fedeyya Al Mansoori, who is currently studying for her MSc in Computing and Information Sciences in the space systems and technology concentration. Al Mansoori was recently awarded the YahSat Innovation Award – Fekrati – for her project titled ‘Real Space Environment Simulation’ that proposes a shared platform that can be fed existing data as well as data from new spacecraft to produce an accurate real-time simulation of the space environment.

The impact of MI’s focus on training and developing talented female innovators can also be seen from their achievements after graduation.

“Such socially-impacting contributions are possible not only because of MI’s expert faculty that continuously encourages the students, but also because of the commitment of our graduates to contribute to the community through sustainable innovations,” she told the audience.