Energy-Efficient Chillers Designed for the Desert 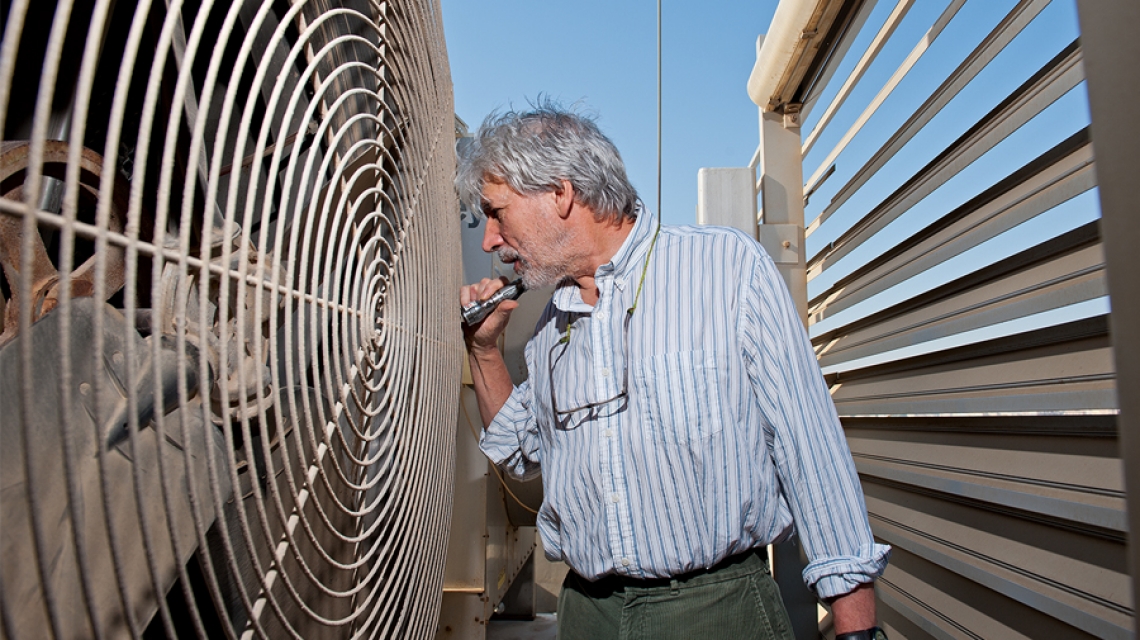 Cooling of the UAE buildings may be the single largest drain on the country’s electric grid, with cooling representing approximately 50% of annual and as much as 75% of peak-day electricity use in Abu Dhabi.

This massive energy footprint is significantly related to inefficient cooling systems that require excessive amounts of power to cool the air. Such cooling systems make up a large fraction of Abu Dhabi’s air-conditioners and they are often imported from countries with a milder climate where standards don’t account for the UAE’s harsher climate, resulting in inefficient operation.

Chillers that are specifically designed for the UAE’s climate could play a critical role in reducing the country’s cooling-related energy footprint, with the potential to reduce cooling-related electricity consumption by over 25%. With this prospect in mind I have guided a team of Masdar Institute research engineers and students, with input from industry collaborator SKM, in the development of an optimal chiller design for the UAE that offers high performance, energy-efficiency and a reduced life-cycle cost.

The project was sponsored by the Executive Affairs Authority of Abu Dhabi to establish minimum energy performance standards (MEPS) for chillers in the UAE. Such standards will ensure that cooling equipment built in or imported to the UAE and used in Abu Dhabi’s buildings is the most energy-efficient in the world.

The performance maps were then applied to a UAE cooling load model that mimics hourly cooling loads of the UAE building stock to estimate the annual electricity use required for each design. Combining the electricity requirement and cooling equipment cost of each design, we performed a financial analysis to determine which of the competing chiller designs would yield the lowest life-cycle cost. Life-cycle cost represents the entire cost of owning and operating a chiller over its expected lifetime. Inefficient chillers tend to have a lower purchasing cost but higher life-cycle cost because the cost of electricity used throughout their operational lifetime is up to four times the equipment purchasing cost.

As a result, we found that all of our chiller designs are cost-effective and significantly more efficient than current chiller systems in the UAE, including Masdar City’s district cooling plant. The district cooling plant at Masdar City has a seasonal coefficient of performance (SCOP) – which is a ratio of the amount of cooling provided by the chiller over the course of a year to the electricity it consumes – of 3.8, while the modeled SCOP of the UAE-optimized air-cooled chiller is 5.6 – representing a 46% improvement in energy-efficiency.

Although upfront cost of the UAE-specific chiller is roughly 22% higher than that of a conventional chiller, the high energy-efficiency level results in a 14% lower life-cycle cost. In other words, the lifetime operational cost savings of the advanced chiller more than offsets its higher initial upfront cost. Conversely, the higher operating costs of a conventional chiller significantly outweigh that tempting low initial purchase cost.

We found that an improved compressor, larger condenser and evaporator, sub-cooling control, variable speed condenser fans, and a high-efficiency compressor motor all contribute significantly to the energy improvements achieved by the highest-performing chiller design.

While our improved designs were intended for commercial-building-sized air-cooled chillers in the 100 to 800 kW range, similar design changes could be applied to other air-conditioning systems, including window units, mini-split units, variable refrigerant flow systems and even water-cooled chillers.  At the current actual cost of electricity production in Abu Dhabi, the potential savings, at 100% market penetration of all optimized chiller and AC types, amounts to over AED5 billion per year.

Our work has helped identify optimal MEPS for UAE chillers, which, if implemented on all imported and locally-developed chiller technologies in Abu Dhabi, will reduce not only the country’s electric bill, but its high carbon footprint as well.

Dr. Peter Armstrong is an associate professor of mechanical engineering at the Masdar Institute of Science and Technology

Masdar City ready to start the next phase - The National