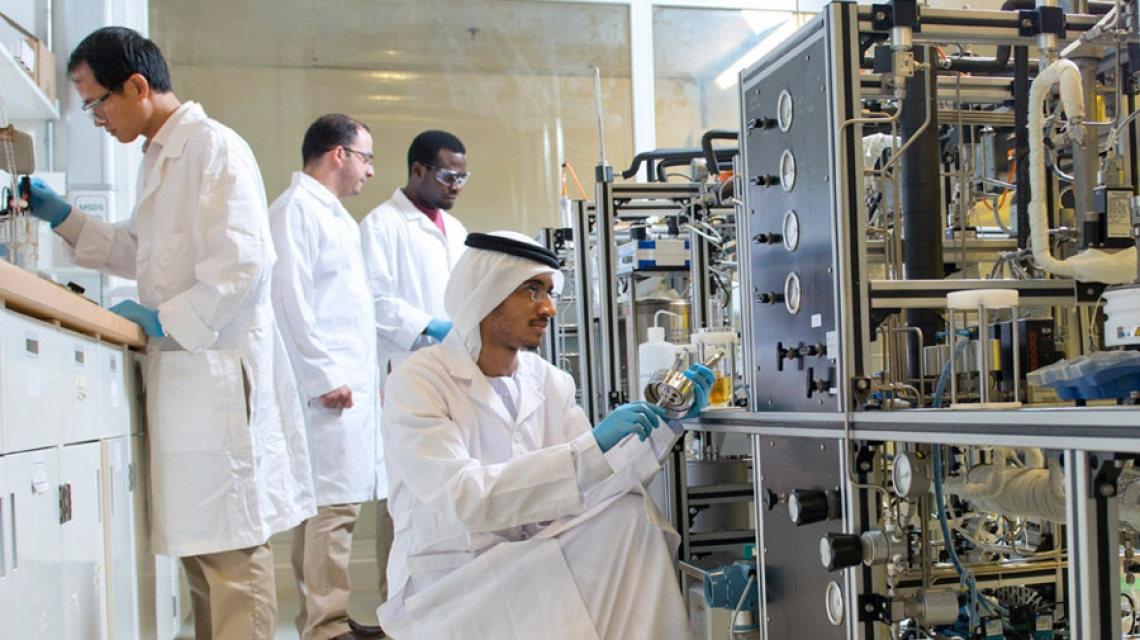 Global climate change is perhaps the most vital challenge of the modern era, which is why 195 nations came together for the United Nations Conference of Parties (COP21) meeting and sign the resulting Paris Agreement — a historic agreement to combat climate change by curbing emissions, strengthening resilience and taking common climate actions.

Ensuring that mankind is able to continue to expand and advance without derailing the planet’s climate through byproduct gases is a momentous task that will require a range of strategies and solutions. Carbon capture and sequestration (CCS) is one technology that is expected to play a critical role in bringing our industrial and environmental needs into balance – provided it can be made affordable and reliable.

The concept of carbon capture and sequestration or storage was borne in the 1970s from the realization that rather than simply releasing the carbon produced by a range of industrial activities, it could be more productively used if captured for activities like enhanced oil recovery. The value of this concept grew in the 1990s, when the impact of carbon emissions on the environment began to be noticed, providing a stronger incentive to explore how carbon emissions could be captured and locked away.

Despite the recent boom in alternative energy, greenhouse gas-emitting fossil fuels still power nearly 93% of the world’s power stations and industrial plants, venting dangerous levels of carbon dioxide (CO2) into the atmosphere every day. In the UAE, natural gas-fired power and water desalination plants are responsible for 73% of its CO2 emissions.

Phasing out these power plants and replacing them with clean ones will likely take several decades. In the meantime, CO2 will continue to wreak havoc on our atmosphere and environment, threatening to warm the world by at least 4° Celsius – which, by 2100, will cause increasingly intense storms, droughts, wildfires and sea levels – if left unchecked.

In the meantime, CCS can offer an effective way to capture carbon and lock it away from the atmosphere. CCS involves capturing, transporting and burying the CO2 underground or using it to produce industrial chemicals, fuels and other high-value products. CCS technologies promise to trap up to 90% of CO2 emissions from power stations and industrial sites, but it comes at a price.

“Current carbon capture and storage technologies are expensive, and can cost power companies a fifth of their energy,” explained Masdar Institute professor of mechanical engineering Dr. Tariq Shamim. “If we want to see a significant reduction in atmospheric CO2, then we need to make CCS more affordable and efficient.” However, the costly CCS technology is not more expensive than other clean energy technologies such as renewables.

Researchers from the Massachusetts Institute of Technology (MIT) and Harvard University found that with current CCS technologies, capturing one ton of CO2 can cost between US$50 and US$100 because 20% to 30% of a power station or industrial plant’s energy is used just to run the CCS systems. It could also cost nearly US$1.5bn to retrofit CCS on existing power plants and factories.

Because of its high costs, there are only 22 operational or planned CCS projects for power stations or industrial facilities around the world – one of which is expected to open in Abu Dhabi by 2018. According to the International Energy Agency (IEA), CCS can provide 20% of the carbon cuts needed by 2050 to avoid a global average temperature increase of 2° Celsius, but only if significantly more CCS systems are built. And to build more requires cheaper technologies, which is what researchers at Masdar Institute of Science and Technology are working to produce.

One type of CCS technology is called post-combustion CCS. It works by capturing CO2 after the fuel – usually coal or natural gas – has combusted. The resulting flue gas that wafts out of the power station’s smokestacks is ‘scrubbed’ with a material that absorbs CO2. This material is often a water-based chemical solution made of amines, which are ammonia-derived organic compounds, and it could be the reason why post-combustion CCS is so expensive.

“Once the aqueous amine solution fully absorbs the CO2, the solution is heated and the CO2 released. The released CO2 is collected and then piped away. But the problem with this conventional aqueous amine solvent is the high energy demand and that part of the heat needed to regenerate the CO2 is lost through evaporation. If we heat the solution to 120 degrees Celsius, almost one third of the energy goes towards water evaporation, which means some heat is wasted,” explains associate professor of chemical engineering Dr. Mohammad Abu Zahra.

Dr. Abu Zahra has proposed an alternative solid amine-based material to absorb CO2 that requires half the energy.

Using a powdery amine material to absorb CO2 means when the mixture is heated, no heat will be wasted on water evaporation, creating a more efficient system.

“A solid amine with absorbed CO2 can be heated to 130 degrees Celsius, and all of that heat is used to release the CO2,” Dr. Abu Zahra said.

A pilot of the solid amine technology has been running for six months at a coal-fired power plant in North Carolina, USA, where 90% of CO2 has been successfully removed. This is done within the solid sorbent development and testing project, which if funded jointly by Masdar Special Projects and US Department of Energy.

Now Dr. Abu Zahra is testing his powdery, amine-based absorbent material on a natural gas-fired plant in the UAE, where the majority of the country’s electricity is supplied by natural gas.

His research team, which include Master’s students Alia Aljasmi, Roghayeh Dejan and Abdullah Al Hinai, along with PhD student Talal Al Hajeri, are exploring various organic and solid sorbents to improve the efficiency of CO2 capture.

“The novel carbon capture technologies we are developing at the Masdar Institute of Science and Technology could be used to help reduce the CO2 emissions generated by some of the country’s most energy-intensive industries, which in turn would significantly reduce the UAE’s carbon footprint” said Al Hajeri.

When a fossil fuel, such as natural gas or coal, is mixed with air and heated to a high enough temperature, it combusts, releasing carbon dioxide, nitrogen and sulfur dioxide  into the air. Pre-combustion CCS technologies separate carbon from the fossil fuel before it is burned. But the decarbonizing process requires a lot of energy, making it more expensive than post-combustion CCS technologies.

Another popular CCS technology involves removing nitrogen from the air, so when the resulting pure oxygen is combusted with the fossil fuel, only CO2 and water is produced. This is known as oxyfuel combustion. Capturing the CO2 becomes easier, since it no longer needs to be separated from nitrogen. The drawback is that separating oxygen from air requires expensive materials and an energy-intensive air separation unit.

Dr. Shamim is pursuing a different approach to carbon capture that is similar to oxyfuel combustion, but less energy intensive. He is working with ‘chemical looping combustion,’ which separates oxygen from air without an energy-intensive air separation unit.

In Dr. Shamim’s chemical looping combustion system, oxygen molecules from the air get stuck onto small metal particles – a process known as adsorption – and are then easily removed for combustion with the fossil fuel. The CO2 in the resulting flue gas then can be easily separated, captured and stored.

“We are using iron, copper or nickel particles, which will undergo a chemical reaction and then adsorb oxygen from the air,” Dr. Shamim explained. “The adsorbed oxygen will be released into a second chamber where it will be used to combust the fuel. The high-temperature nitrogen which was not adsorbed by the metal particles can be used to power activities, such as turning a turbine.”

Dr. Shamim’s team has built the region’s first lab scale chemical looping combustion system in collaboration with MIT and Southeast University China, which was completed in 2014, and are going through a series of testing and validation. The team is currently working to find the most optimum metal material to adsorb the oxygen.

Captured CO2 is usually injected deep underground, into dried up oil and gas reservoirs, or into deep-sea basalt formations. But sometimes, the CO2 gets put to use.

Other researchers at Masdar Institute are working with Abu Dhabi National Oil Company (ADNOC) to use captured CO2 for enhanced oil recovery. An alternative to natural gas, which is often used for the same purpose, CO2 is being injected at high pressures into oil wells in order to loosen the trapped hydrocarbons, helping to bring them up to the surface.

CO2 is also being used to produce minerals, fuels, chemicals and other valuable products. Dr. Abu Zahra is working with UAE-based Engineering Solutions (ENGSL) Minerals to use CO2 to produce one such valuable product – cement raw materials.

ENGSL Minerals has developed, tested and patented its technologies for carbon capture and its transformation into soda chemicals, and is now exploring the application of CO2 for cement production.

“We are developing new lab facilities for this project and, once we successfully demonstrate its capabilities in the lab, we will test it at a plant being developed by ENGSL Minerals in Abu Dhabi’s Mussafah area,” said Dr. Abu Zahra.

With these research projects and others, Masdar Institute is working to ensure the UAE has a range of affordable and effective solutions at hand to help it reduce its carbon emissions while working towards achieving its larger goals of renewable energy production. The CCS technologies and solutions developed by its faculty and students will enable the UAE to continue to meet its water, power and industrial output needs while contributing to the global reduced carbon emissions targets that are necessary for long-term sustainability.